BELOW: Dr M did an Anwar — reminiscent of what ketum did in stealing the limelight during the first Bersih in 2007 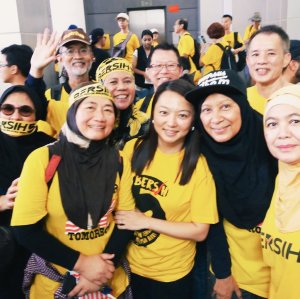 ABOVE: Mama Dapster and her yellow-clad tudung buddies

Tun successfully hijacked Kuning to win this round

So there is confirmed a paradigm shift in our political landscape. It’s now Umno vs DAP-oppo led by no other than Tun himself.

Tun is an old warhorse who goes for the jugular and takes no prisoners.

Don’t think Malaysia is big enough unless one or the other is made to retreat and surrender. Place your bets now.