When my late mother was alive, no beef was allowed to be served in the house.

She was a Buddhist who observed the taboo.

Below is her picture taken when she prayed at the reclining Buddha temple in Tumpat, Kelantan – snapped by the Star‘s Kota Bharu bureau photographer Rohaizat Md Darus. (I was at that time a staff of the paper’s Saturday Weekender pullout.) 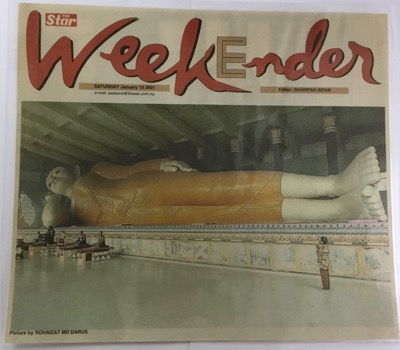 I remember as a child asking my mom why she would not let me eat beef.

She replied the cow contributed a lot of goodness as well as suffered tremendously and sacrificed for us humans. I can still recall that she was rather emotional in explaining this and even close to tears when reminding me how we must respect this sacred animal.

Her belief is not all that much of a surprise considering that Buddhism originated from the Indian subcontinent and hence some of the Hindu practices would have also historically seeped into our faith.

The photo above is, I believe, the Menghadap Rebab ceremony which I witnessed in Besut, Terengganu many years ago. It was part of a Makyong folk art performance.

There are traces of Hindu salutations and spiritual incantations in the Buka Panggung proceeding. Under PAS, however, the Makyong dance theatre was banned whereas Wayang Kulit was sanitized for show to the tourists, that is after its Hindu rituals were suitably excised.

Hindu influences permeated many aspects of Malay life before the advent of Islam. One of my favourite songs connected with Terengganu, Ulit Mayang – music video below – is an offering to the spirits of the sea. The mantra is pre-Islamic.

69 thoughts on “Hindu influences deeply embedded in our cultural roots”