The Pribumi-PAS compact is a game changer.

Concluded last week in the PM’s office, its bookends are foreshadowed by the two tweets below.

Two days ago (Wednesday), PAS Mursyidul Am Tuan Guru Hashim Jasin reiterated his party’s willingness to cooperate with other Malay parties for the sake of “memartabatkan Islam”.

BELOW: Tun teases “We’ll see if PAS supports me in a no-confidence motion”;  Don’t worry, PAS will hold up its end of the bargain

DAP not delivering on the stump in Semenyih

The strength of the bond between Harapan parties “can be seen [in] how we worked together very closely in all by-elections,” Rais Hussin insisted to Malaysiakini yesterday.

Is it true that “Harapan’s solidarity is very strong” as claimed by the Pribumi spokesman?

The Semenyih result will surely prove Rais wrong nanti. Tapi before that watershed byelection comes around on March 2, we can theorize in the meantime about Harapan’s shaky fundamentals.

BELOW: Mahathir pictured having tea with Penang’s most favourite popstar Zakir Naik 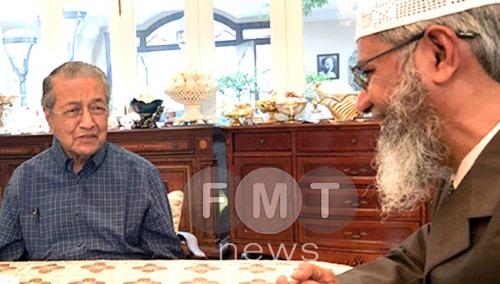 (a) Rais, do please share with us what kind of bond it is that binds your Malay First party to the ‘Malaysian Malaysia’ party?

Frankly, you’d have more success in herding cats than at getting the Harapan parties to stand together on a single common platform (Icerd, UEC, local council elections, Sedition Act, RUU355, etc, etc).

BELOW: Hadi and Mahathir willing to stomach each other for Islam’s sake

Remember … there are no permanent friends or foes in politics, only permanent interests.

Hence one simple question: Are Mahathir’s long-term interests are more aligned with PAS or with its Harapan evangelical partner?

This underlying antipathy between PM and PAS is a reasonable conjecture based on Mahathir’s political track record. So, given how widely known it’s been that Mahathir never liked the Islamist party, his recent and reluctant coming to terms with PAS must be something huge.

Hadi Awang’s greatest fear, expressed only a few days ago, is that non Muslims are running the country (see tweet above).

Hadi Awang’s greatest wish is that Malaysia is governed by Muslim leaders. An Islamic country must be led by Islamic role models – this is the PAS ideology.

Mahathir ISA-ed the evangelists in 1987

Malaysian Christians who feel themselves religiously persecuted are championed by powerful international Christian organizations that concern themselves about the plight of minorities in Muslim lands (ref. report above).

Christianisation of Malays by the evangelists was reason for the detention of church activists under Ops Lalang. The 1987 ISA dragnet was executed under Dr Mahathir’s watch as prime minister round one.

Thus in light of this Ops Lalang past history, we cannot say that Mahathir diverges in any way from PAS’s strident view of Christian missionaries as a threat.

Like Frank Sinatra, Mahathir wants to do things his way. He wants to see the return of Proton as national car (Mark II), return of crooked bridge, return of Formula One … in short, to reprise Mahathirism all over again.

Political analyst Kim Quek sums up Mahathir as a politician “whose thinking is too deeply embedded in the Umno era politics – racist ideology, political cronyism, fondness for draconian laws as instrument of rule, personal idiosyncrasies masquerading as foreign policy, and above all, inability to inject new life into the economy by removing racist and political shackles” (see his comment in Malaysiakini yesterday).

In other words, Mahathir’s politics can be summed up under the rubric of satu bangsa, satu bahasa, satu budaya.

Dapsters obviously fall outside these parameters.

PAS-hating Dapsters cannot fathom that Mahathir can and has hooked up with PAS.

But they should consider: If Mahathir can make a 180-degree turnaround to make nice with old enemy Kit Siang and DAP, why not replicate the same deft move on PAS with equal alacrity?

The power hungry DAP simply does not possess the capacity to understand what really motivates the Islamist party. The truth is PAS will indeed sacrifice itself (like a candle) to keep DAP from taking control.

As for Mahathir, expect him to ultimately dump DAP on the sacrificial altar.

DAP will fall in this war. The 95 percent Chinese backing DAP have reversed themselves into a lose-lose situation. And nobody’s gonna feel sorry for them – not Umno, not Pribumi, not PAS. Well maybe Mat Sabu and PAN … just a little bit.