Harapan won Semenyih nine months ago with a thumping majority of some 9,000 votes (see result details below).

And that huge GE14 majority went poof! Like a mirage of magic dragon breath, it simply evaporated. 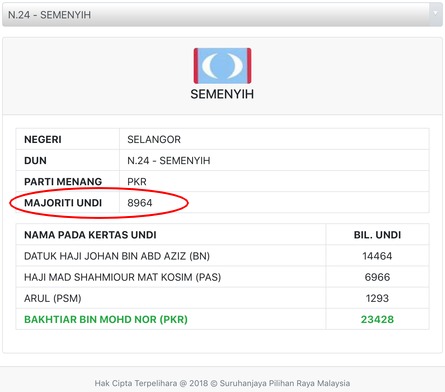 Harapan’s strength is not real but merely smoke and mirrors.

Without the foundation of real Malay support, the Harapan government cannot last. How can our country be governed legitimately by a minority administration since Malaysia’s two biggest opposition parties are semua Melayu?

It looks like the PAS votes in Semenyih transferred neatly to Umno today — see below.

According to DAP’s own analyst Ong Kian Ming, 76 percent of Malay voters supported Umno and PAS in GE14. Presently the ratio of Malay opposition support has risen even higher than the three-quarters previously.

Semenyih is a true barometer of Malay sentiments. A majority of the majority race reject Harapan.