Yes, it was a loud firecracker of a fart – and not a “faux pax” as excused by Malaysiakini – when Guan Eng declared the Umno-PAS union as tantamount to a “declaration of war” against non Malays. You can see the portal’s original headline (left) below.

Before the shit (deluge of police reports) hit the fan, Malaysiakini had changed its headline – see second screenshot – to fumigate the stench. That Malaysiakini did Guan Eng a favour to mitigate his offensive smell can be seen from its UBAH-ed and softened headline.

It is not the job of Malaysiakini to do damage control for DAP. Nor is it the function of its copyeditor to whitewash the DAP’s patent animus for Umno and PAS by rewriting the outlet’s already published copy upon instruction from Guan Eng‘s press aide.

Here it looks like Malaysiakini acted more as DAP’s corporate communications agent than as an independent news provider. 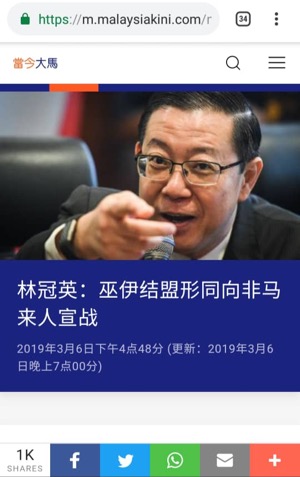 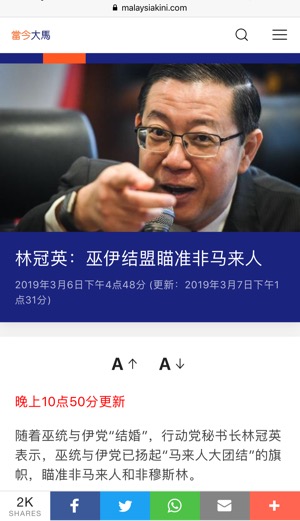 The amended headline at 11.29pm – see juxtaposed screengrab – is Malaysiakini’s revised version to reframe its story angle. It now says the DAP man has retracted his thoughts on the Christchurch incident.

Imagine! DAP can somehow drag Umno and PAS into the story when it’s a mass shooting that happened thousands of miles away in remote New Zealand.

After receiving a ton of negative pushback for his views, Chong Sin backpedalled claiming it was all a “misunderstanding”. And Malaysiakini obligingly played along with his cop-out.

In other words, Malaysiakini aided and abetted the DAP damage control exercise. Yet again. 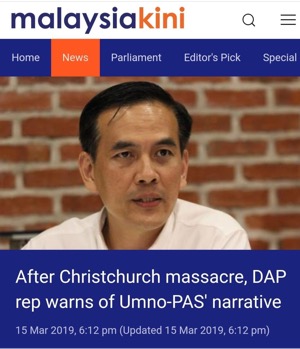 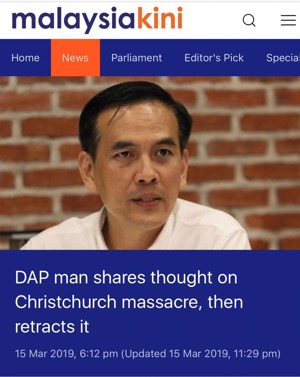 So Malaysiakini has twice revised its ‘printed’ copy at DAP’s behest. This really stinks.

Just like Harapan ditching their manifesto promises, Malaysiakini is similarly shredding its journalistic standards quicker than you can say “capati”.

Certainly “retractions” should be given airtime. This can be done in a follow-up article or alternatively attached as a mea culpa note, if you must, to the original article. But you don’t rewrite what’s already been published just because the speaker changes his mind within hours.

The purpose of printing a ‘correction’ is to rectify a mistake. There were no mistakes pertaining to the first Malaysiakini reports on Guan Eng and Chong Sin. What happened was merely that both the YBs realised they hadn’t been politically correct and desperately wanted to avert the inevitable public backlash.

BELOW: Malaysiakini chucks inconvenient DAP truths down the Memory Hole 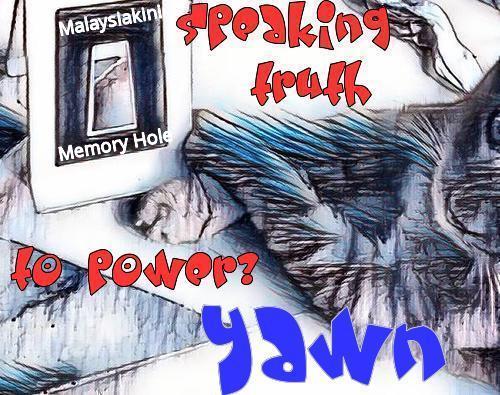 How the self-righteous SJWs have mightily fallen

It’s fair for a publisher/media to issue an erratum if its reporter makes a factual error, e.g. saying Mahathir was born on 20 Dec 1925 when Tun’s actual day of birth was 10 July 1925.

(For details on Mahathir’s two birth dates – one true, one false – read Astro’s databank. Apparently Tun’s father lied about it in order to fast-track / eventually save his young son a school calendar year.)

It is however bad journalism for Malaysiakini to help flush DAP’s shit down the proverbial memory hole as a matter of taking political sides.

Revising the reporters’ copy so that Guan Eng and Chong Sin don’t come out smelling of fart is akin to scrubbing the DAP’s shitty footprints.

What Guan Eng and Chong Sin initially said were straight from the heart – definitely an accurate reflection of the DAP ‘hate’ ethos. Their soul-baring, free-flowing words should have been preserved, unaltered, in the two Malaysiakini articles instead of being ‘disappeared’, i.e. sanitized through rephrasing, or in publishing jargon – corrigenda (Latin, plural for “to correct”).

A little earlier, I had pointed out that Malaysiakini risked becoming the mouthpiece of Penang Institute, which is the DAP think-tank.

What I’ve highlighted above about Malaysiakini‘s most recent public relations for Guan Eng is an example of the portal bending its knee even more egregiously to the ruling power.

Public trust in the press has plummeted around the world, with an increasing number of the previously captive audience believing that the legacy media is dishing out fake news. Very soon, readers will view Malaysiakini and DAP in much the same light that Utusan was always seen as connected to Umno.