Describing last week’s assault, Wong told The Malay Mail on March 22 that “the first thing they [Umno supporters] did when they came down was shout at us asking ‘Kenapa semua Cina’ and then proceeded to walk across the streets towards us and tear up our posters and placards without any provocation from us,” said Wong.

”Why all Chinese?” Indeed there were no non Chinese among the small group demonstrating against Najib near Universiti Malaya last Friday.

Lokman has since highlighted social media content indicating that Wong and his fellow UM protesters were likely DAP youth cadres.

When Lokman, Razlan Rafii and others say “bangsa DAP” or “puak DAP”, they mean the Chinese.

BELOW: The T-shirt Wong Yan Ke is wearing says ‘l Am Malaysian’ but he’s seen as “bangsa DAP”, “puak DAP” and “Cina” – all three descriptors being interchangeable 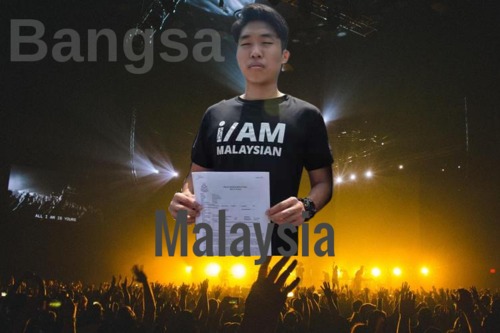 DAP is afraid of potential violence against Chinese

DAP Multimedia Minister Gobind Singh Deo today chided BN lawmakers for not taking seriously enough the harassment of a Malaysiakini intern – see tweet below – who covered the manhandling of Wong at the demo.

For the record, some Chinese journos had sustained more grevious injuries in the course of duty back in July 2015.

Some Indians rioted at the Seafield Sri Maha Mariamman Hindu temple in late November last year. Harapan chairman Mahathir accused the Indian rioters there of ATTEMPTING TO MURDER fireman Adib – see above report by The Star.

No wonder the head of non-Malay Harapan leaders is so whacked and causing their paranoia.

Recently DAP Chinese leaders courted controversy when Joseph Lim Guan Eng stated that the Umno-PAS union was tantamount to a declaration of war against non Malays; David Nga Kor Ming said Umno-PAS rule would lead to Malaysia becoming a Taliban state and Johnson Chew Chong Sin said race and religion rhetoric stemming from the Umno-PAS alliance could lead to violence (similar to the mass shooting in Christchurch) against non Malays.

Fear of violence is a recurrent theme among DAP leaders.

DAP has no real Malay friends after making enemies everywhere

DAP is an enemy of Umno and PAS, the two parties commanding the support of three-quarters of the Malay electorate. DAP is also enemy with PKR’s Azmin faction after the botched Kajang Move.

In essense, DAP is opposed to everything that Umno and PAS hold dear. Among its own supposed allies, DAP has precious few values in common either with Pribumi and PAN, and is at odds with half of PKR.

The DAP’s “Unity in Diversity” mantra is as imaginary as a unicorn. On the contrary, DAP has made the distrust and distance between races and religions now unbridgeable.

Previously I explored how Malaysians are cleft in two by the political divide – Harapan vs BN.

Nonetheless I’m beginning to concede to the old wisdom that our most significant division in the country is Malays / Chinese. We’re two tribes and Dapsters are definitely on the losing side.

Some recent developments have led to this finetuning of my thought. One is the nyawa-nyawa ikan condition of the BN. The coalition stepped back from the brink only when MCA agreed to stay put in BN so that the opposition is multiracial.

But even the MCA (and MIC) leaders themselves must needs admit that while the Umno continues to remain at the wheel, PAS has now become co-driver. The two Chinese and Indian parties have been relegated to backseat passengers in the BN car.

The second prod to my reappraisal is P. Gunasegaram’s column this morning where he rehashed some familiar GE14 data. We have all been looking at Harapan’s divvying up the spoils of war from an angle of percentage portion snatched by each component party.

Today I’ll do it diferently and parse the election stats on the basis of how Mahathir’s main consideration had been race. DAP and PKR are multiracial parties; Pribumi and PAN are mono racial parties. DAP is overwhelmingly Chinese dominated whereas in PKR, the non Muslim vs Muslim YBs are somewhat evenly matched.

Pribumi and PAN, on the other hand, comprise Muslims wholly. Many pundits have correctly observed that Pribumi got the lion’s share of juicy posts both at federal and state level. Often overlooked though is the fact that Mahathir over rewarded PAN as well.

PAN contributes about 10 percent of the total number of MPs in Harapan but were bestowed almost 20 percent of the cabinet positions – see Malaysiakini chart below – in Mahathir’s tremendously lopsided exercise of “prime ministerial prerogative”.

“Such was Mahathir’s patently unfair cabinet that out of the 13 MPs he [Pribumi] had, six became full ministers, a further six deputy ministers, and one, Mahathir’s son, became menteri besar of Kedah,” Guna wrote in Malaysiakini.

Meaning, from 13 MPs in toto emerged:

It’s 100 percent reward for Pribumi contrasted against their parliament success rate of 25 percent, and more glaringly against DAP’s success rate of almost 90 percent with the voters – see Guna’s table below.

I shall now proceed to do a race-based analysis of the Perak DUN.

There are 59 seats in the state legislative assemply. Pribumi has only one Perak Adun yet the Mahathir party’s sole sole YB is the menteri besar.

Let’s also look at the distortion from ethnicity rather than party bias.

Of DAP’s 18 Perak Aduns: One is Malay, 14 are Chinese, and three are Indian. Of PKR’s four Perak Aduns: Two are Malay and two are Chinese. All of Pribumi (the most special ‘one’) and PAN’s six Aduns are Malay.

Of Harapan’s 29 Aduns in Perak, 10 are Malays and 16 are Chinese. It is clear that Pribumi’s Ketuanan Melayu is paramount.

Next, let’s look at the Harapan Adun composition in Malacca and Negeri Sembilan. DAP is the biggest Harapan component party in both states. (Results as recorded immediately post-election.)

MALACCA: Of DAP’s eight Aduns in the state: One is Malay, six are Chinese, and one is Indian. Of PKR’s three Malacca Aduns: One is Malay and two are Chinese. All of Pribumi’s two and PAN’s two Aduns are Malay.

Summary: Of Harapan’s 15 Aduns in Malacca, six are Malay and eight are Chinese.

NEGERI SEMBILAN: Of DAP’s 11 Aduns in the state: Seven are Chinese, and four are Indian. Of PKR’s six Negeri Sembilan Aduns: Four are Malay, one is Chinese and one is Indian. All of PAN’s three Aduns are Malay. Pribumi has no Adun here.

Summary: Of Harapan’s 20 Aduns in Negeri Sembilan, seven are Malay and eight are Chinese.

•  Malacca Harapan has six Malay vs nine non-Malay Aduns. The chief minister is a PAN Malay.

•  Negeri Sembilan Harapan has seven Malay vs 13 non-Malay Aduns. The menteri besar is a PKR Malay.

Even though the Chinese/non-Malay Aduns outnumber their Malay counterparts, Ketuanan Melayu always prevails. There is no change or ‘Ubah’.

There is certainly no New Malaysia. DAP has sold a false hope of “equality” to its heavily brainwashed base.

In the process of getting its Chinese racial majority YBs, the DAP has antagonized Malays across the board but reaped little reward in terms of power-sharing.

His critics call Mahathir a lot of things. I’d say – figuratively speaking – that the Harapan chairman is the best ‘dog’ trainer in the world. He’s gotten DAP to sit, obey and lick crumbs thrown from the master’s table.