Calling out the ‘Jews’ of Malaysian politics appears to have taken its toll on Hadi Awang. What Hadi declared was a very serious step to take.

Saying “Jews” (metaphorical enemy of PAS in Malaysia) must be fought was not merely a byelection rhetoric. It came from the bottom of Hadi’s heart, and seemingly put too great a stress on his heart as well.

Mahathir is yet another Muslim leader with a chequered history in relation to his own controversial remarks on the Jews. DAP would do well to hear his honest reaction.

BELOW: Hadi was warded at the National Heart Institute (IJN) yesterday

When Malays are able to unite under the banner of Islam, their power is potent. But when they invoke “THE JEWS” as a battle cry, they really mean business! The views of a PAS Muslim and a Pribumi Malay on the Jews are identical. Muslim unity is a big umbrella.

The Chinese Christians (DAP) are the cucumber. The Malay Muslims are the durian.

From the Chinese-Christian side – there is DAP deputy sec-gen David Nga Kor Ming’s “Taliban” and his party sec-gen Joseph Lim Guan Eng’s “declaration of war”.

From the Malay-Muslim side – Umno vice president Ismail Sabri Yaakob’s “it is jihad”.

From the Muslim-Malay side – PAS president Hadi Awang’s “[our enemy is like] the Jews”.

Those of us who are non Muslim may be unfamiliar with the Quran but there’s nonetheless an often quoted verse that’s been popularized in our political parlance. It’s Surah 2 Ayat 120 from the book/chapter Al-Baqarah.

Both PAS and Umno leaders have cited it — 2:120 references the Jews and the Christians.

Hadi: PAS-Umno critics like 'Jews' who must be battled to save the country https://t.co/e5G4bZfDzY pic.twitter.com/KvNWjN6jqD

Take Ivanka Trump as one famous example. Neither of her parents – Donald and Ivana Trump – are Jewish. Ivanka however converted to the faith of her orthodox Jewish husband upon marriage. Thus she’s become a Jew.

In his seminal book The Malay Dilemma, Mahathir likened Malaysian Chinese to Jews.

BELOW: Harapan chairman Mahathir has the international reputation of being an “anti Semite”

After calling them ‘hook-nosed’ and blaming them for Middle East issues, Mahathir expressed scepticism over the number of Jews killed in the Holocaust. https://t.co/dgay24hmZY

Religion is where DAP and MCA differ

In an historical context, Jews and Christians are the religious rivals of Muslims in a sense that Buddhists never were.

Jihad is Muslims fighting Christians, countervailing Christians fighting Muslims in the Crusades. There is no Buddhist equivalent term to jihad or crusade. After all, the three-cornered fight for Jerusalem is between Christianity, Judaism and Islam; there’s no claim on that holy City of God from Buddhism.

This reality goes some way to explaining why Umno is ready to wage jihad when DAP is in presently power aligned to Harapan whereas jihad was never invoked when MCA was previously in power aligned to BN. That’s because evangelical Christianity is very dominant among the DAP leadership.

BELOW: DAP’s Malaysia Baru activism in Sarawak, the only region in the country with a Christian ‘majority’ (plurality)

A Day of Patriotism forum by Movement for Change Sarawak (MOCS) in Kuching. A town hall on the issues we are working on in @KPWKM. Good turnout & the crowd stayed till the end as we explored the various things Malaysians can do to support Malaysia Baharu pic.twitter.com/8yZzsdUdrj

The most important distinction between DAP and MCA is best summed up by Malaysiakini columnist S. Thayaparan who last month (March 4) wrote:

”I have never seen the visceral hatred some Islamists – from any of the Malay power structures – have towards DAP than they ever exhibited towards MCA. Why is that? Because MCA never attempted to define Islam as some in DAP and their supporters do when going about this Bangsa Malaysia propaganda.”

In plainer language, Thaya was saying that Malay Muslims never hated on MCA the way they’re now hating on DAP.

Why the difference? Motivating the “Bangsa Malaysia propaganda” bullshit is the DAP leadership’s evangelism. By comparison, MCA is Chinese centric.

BELOW: Past and current MCA leaders, including Chua Soi Lek, praying in temple (file photo) 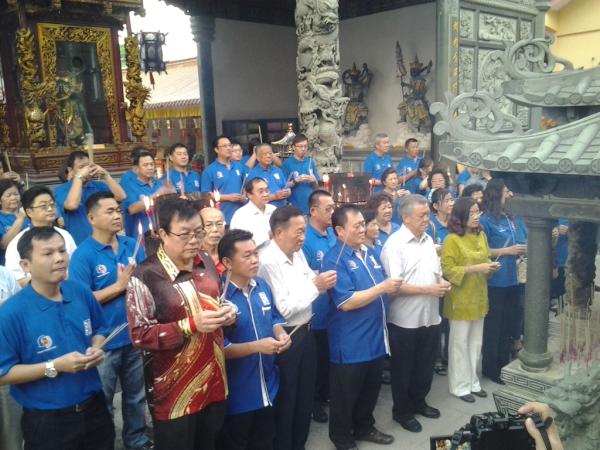 How does Mahathir view Cina DAP?

These latest developments from Hadi Awang (“Yahudi”) and Ismail Sabri (“jihad”) are an indication that PAS and Umno are deadly serious in their hostility to DAP.

Here’s something for you to think about. DAP is widely viewed as anti Malay and anti Islam. Have any Pribumi leaders come forward to publicly defend the DAP?

And a final question. Aside from burning their bridges with Umno and PAS, the 95 percent Chinese have irrevocably hitched their wagon to Beloved Tun.

So, is Mahathir willing to step up to the plate, renounce his Malay Dilemma theory on the Jewish-Chinese spiritual kinship and henceforth declare that his DAP allies have no resemblance whatsoever to “predatory” Jews?

3 thoughts on “What does Mahathir say about Hadi’s “Yahudi” outburst?”