The DAP ethos was spelled out loud and clear by its party vice chairman Kulasegaran while on the stump in Rantau where a byelection is being held today. He implied to the Indian electorate, Remember to stick to your own kind.

BELOW: Snake oil peddled by DAP all the last decade that the party has no Indians and “zero Chinese”

According to Kula the Mahathir-inspired Indian DAP leader:

•  “I have come to Rantau so many times, there are so many Chinese shops, so many Malay shops, but I do not like to eat. We go to Tamil shops. Why? Because this our community” … and by inference saying Indians will only eat at Indian restaurants (Chinese must support Chinese shops, Chinese businesses etc).

•  “Referring to the Harapan candidate in Rantau, Dr Streram: “We are of the same blood, what will happen if we do not support our own community” … meaning if you’re an Indian, you must vote the PKR Indian guy and not the Umno Malay guy because race is paramount in politics.

Kula shared the above nuggets of DAP wisdom when speaking in Tamil to an Indian audience two nights ago. This typical race appeal (and likewise in other ceramahs by other DAP leaders when speaking in their own vernacular) was captured in a viral video.

The Tamil communalism displayed by Kula is nothing new. Neither is DAP’s display of racialism when their speakers believe themselves to be in a closed venue and addressing a partisan audience. But with a mixed audience that includes a sprinkling of Malays, they will talk Bangsa Malaysia.

The translation is correct, @Khairykj.

Race, race, race … this is the political capital of Umno, MCA, MIC and DAP.

But it is only DAP that screams “Racist! Racist! Racist!” at its political opponents. Here, Hypocrite Hannah is the biggest culprit.

Expect BN to score a hattrick tonight after Umno’s two earlier wins in Cameron Highlands and Semenyih. Might as well the voters opt for BN, the ori race-based coalition than Harapan, a hypocritical and cheap imitation. 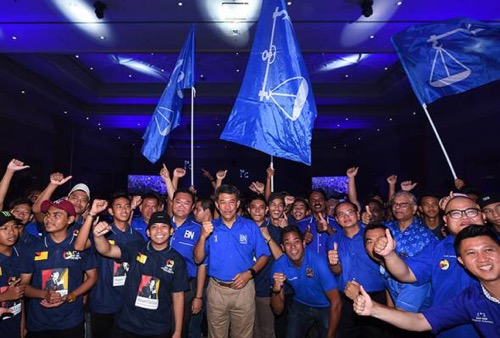