Umno and PAS will return to power sooner than you realise, and the 95 percent Chinese Harapan voters can thank the DAP for it.

Why the accelerated timeline?

Because snap elections are a trending thing. At this moment, three countries – Israel, Austria and Greece – are going into snap elections. The UK is also likely to follow suit when it comes to the Brexit reckoning.

Malaysia too will be pushed into snap elections if Mahathir fails to hand over power to Anwar, pundits have speculated.

The Greeks are voting on July 7. Prime Minister Alexis Tsipras – see tweet above – has called a snap election after his party suffered a crushing blow in last weekend’s European parliament elections.

Twenty eight countries voted to elect a total of 751 Members of the European Parliament or MEPs in the continent wide EU election that kicked off last Thursday and concluded four days later on Sunday (May 23-26).

Austrians will go to the polls probably in early September. The snap election comes after Austria Chancellor Sebastian Kurz was slapped with a ‘No confidence’ vote by a parliamentary majority following the fallout with his ruling coalition’s junior partner. See more details in end notes on bottom of page.

The Israelis will be holding their repeat election on Sept 17.  Members of the Knesset voted to dissolve the parliament after caretaker Prime Minister Benjamin Netanyahu – see tweet below – failed to meet his deadline to form a new government. Netanyahu‘s party had won the most number of seats in Israel’s election this year on April 9.

Britain and Germany are being governed by sinking parties led by tanking leaders – Theresa May (already ousted) and Angela Merkel (booed everywhere and pelted with rotten tomatoes).

French President Emmanuel Macron too has been asked to resign immediately and seek a fresh mandate after his coalition of four parties failed to come out tops in the staggered EU elections.

Needless to say, Macron will ignore the challenge just as he has ignored the 28 straight weeks of Yellow Vest workers protest against his beleaguered administration.

The ‘M’ governments (Macron, May, Merkel, Mahathir) are unpopular with their people. A Merdeka Center survey released last month found Mahathir’s personal popularity plummeting and only 39 percent of the public said they approved of the ruling Harapan government.

BELOW: Outstayed their welcome, tearful Mrs May and Mahathir 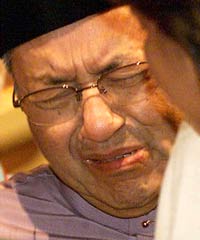 France has 74 seats in the European parliament.

Beaming National Rally leader Marine Le Pen – see tweet below – has called on Macron to resign and hold a snap election after her party finished first in the EU polls very slightly ahead of Macron’s which is in second place.

Exclusive: @MLP_officiel tells @mboyle1 “Macron has neither the honesty to [resign], nor the panache to do it” — after a stinging defeat in this weekend's E.U. elections. https://t.co/pM0lfQQroH

France has seen a shocking collapse of its old mainstream parties.

The Socialist party of former French president Francois Hollande (2012-2017), together with three other coalition allies, garnered only six percent (6.2%) of the votes in the EU election last week.

France’s traditional left, i.e. the socialists, and its traditional right, i.e. the republicans managed to gain only 6-8 percent of the EU votes each. The political centre is disappearing with voters moving to both ends of extreme left and nationalist right.

BELOW: Yellow Vests — Tens of thousands of anti-Macron demonstrators assemble weekly in Paris 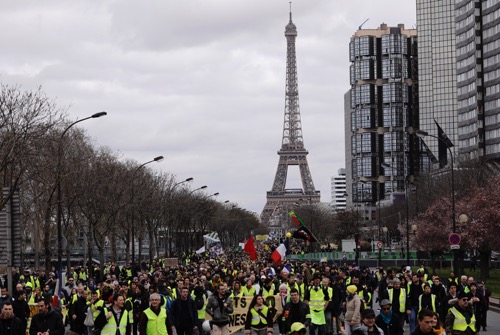 Some enthusiastic patriots are hoping for an early election in Italy after the runaway success of Lega, the nationalist party led by Italian deputy prime minister Matteo Salvini.

Italy has a country allocation of 73 MEPs in the EU. In last week’s election, Lega (the League in English) won 28 seats whereas its partner, the Five Star Movement (M5S), collected 14 seats.

Di Maio heads M5S, which together with Lega, are the co-rulers of Italy. Lega however won double the support of M5S with Salvini’s party notching 34.4 percent against 17.1 percent for Di Maio’s party. In other words, M5S is getting progressively less influential at the same time that Salvini’s the League is growing stronger by the day.

While both DPMs Salvini and Di Maio are Italian politicians, Italy’s nondescript prime minister Giuseppe Conte is a law professor with zero political experience and picked as a compromise or ‘middleman’ acceptable to both Lega and M5S.

BELOW: Matteo Salvini in his campaign during the EU election had condemned the smear against his followers as “extremists” and “racists”

The resignation of Theresa May last Friday will propel her Tory counterpart into 10 Downing Street by next month. Nonetheless, signs are that Mrs May’s successor – Boris Johnson is currently the frontrunner – would face a vote of ‘no confidence’ in the House of Commons as soon as he assumes the post.

May’s Conservative Party moreover crashed and burned in the EU elections – not even managing to collect voter support in the double digits. Ahead of the Tories who garnered less than nine percent (8.7%) share of the vote are the Brexit Party (31.7%), Lib Dems (18.5%), Labour (14.1%) and Greens (11.1%) – see bar chart below.

The UK is apportioned 73 MEPs but between them, the two mainline parties Tory and Labour lost a combined 25 seats compared to their performance in the last EU election five years ago in 2014.

Mind you, Brexit is an infant party founded by Nigel Farage a mere six weeks ago, and catapulting most impressively into first place grabbing 29 seats. In contrast, May’s Tories won a humiliating four seats.

Since the now further weakened Tories are leading a shaky minority government, opposition leader Jeremy Corbyn of Labour smells blood and might want to force a new election when the Brexit departure – already postponed multiple times – reemerges in October.

BELOW: “Merkel Muss Weg” or ‘Merkel Must Go’ is a widespread slogan in Germany 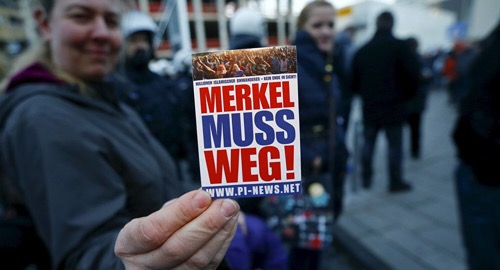 Merkel May Macron Mahathir must go!

Another party that fared badly at the EU polls is Angela Merkel’s Christian Democratic Union that was hit by a surprising green wave. Merkel has already been toppled as CDU party chief and that leaves her chancellor job is in jeopardy.

Germany’s ruling party CDU and its sister party CSU had a combined 28.9 percent share of the vote translating to 29 seats; their junior coalition partner SPD had 15.8 percent (16 seats). Germany is the EU’s biggest country and allocated 96 MEPs.

Altogether Germany’s three ruling parties at 44.7 percent of the EU votes are totaling less than majority, i.e. 50 percent threshold in support from the electorate. By comparison, the successful Green Party alone had 20.5 percent of the votes. German voters are moving to the far left (Greens is Die Grünen in German language) and far right (AfD), thus cratering the country’s centrist politics.

Although Merkel still remains the German Chancellor, she has already handed over her CDU party leadership to hand-picked protege Annegret Kramp-Karrenbauer.

Like Harapan with Pribumi at one end and DAP at its other end, the ruling coalitions of Germany and Italy are similarly marriages of convenience not really expected to last long.

SPD is time and again rumoured to be withdrawing from Merkel’s coalition due to ideological differences. SPD’s pullout will collapse the Merkel government as CDU-CSU do not have enough seats to rule on their own.

What Germany and Italy have in common is that both countries are ruled by unstable, makeshift coalitions comprising parties from opposite ends of the political spectrum.

CDU and its Bavarian sister party CSU are ostensibly conservative Christian – chalk to the cheese of their SPD partner, a liberal socialist party.

In Indonesia, Joko Widodo and his running mate Ma’ruf Amin won the country’s sprawling election on May 21. Ma’ruf Amin the vice president is an Islamist hardliner who heads the nation’s largest Islamic organisation Nahdlatul Ulama as well as the Indonesian Council of Ulama. He is a theologian who pushes the Islamisation agenda and recently expressed regret for his involvement in Ahok’s trial that landed the then Jakarta governor in jail two years for blasphemy.

The party led by evangelical Christian Scott Morrison won Australia‘s election, successfully retaining power. It was conservative Queensland’s homegrown nationalists in particular who swung the May 18 election against opposition Labour Party that had earlier been strongly tipped to win by the pollsters. Morrison became Australian PM nine months ago in August 2018 following a party coup.

ABOVE: Road to Jerusalem, sign pointing to the American embassy in Israel’s capital

The right wingers are definitely going to win reelection in Israel and Austria. Conservatives are likely also take over from the presently failing far-left ruling party in Greece. If Italy holds a new election, its right wingers will sweep the board.

If Malaysia holds a new election, the Umno PAS race-and-religion right will recapture Putrajaya. And Dapsters deserve the next government they get because DAP has caused the collapse of the moderate, middle ground.

BELOW: Staunch Christian Jair Bolsonaro, who has been Brazil’s president since 1 January 2019, won his country’s election on the back of the evangelical vote 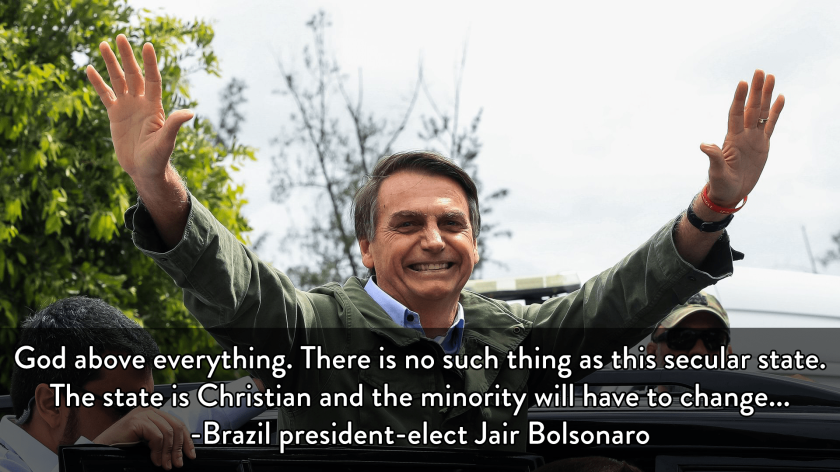 Additional notes on the EU elections

Prime Minister Alexis Tsipras‘ radical left party which has governed Greece since 2015 was given a trouncing by its rival the New Democracy party. His Syriza party obtained only 23.8 percent versus 33.1% percent for the opposition party.

Syriza‘s mandate to rule Greece was due to end this October but Tsipras decided to call an immediate national election, conceding that its disastrous showing at the EU polls signaled a loss of confidence in his premiership.

The Austrian People’s Party (OeVP) led by Sebastian Kurz still finished first at 34.6 percent in this week’s EU election despite his ruling coalition being bogged down by a scandal embroiling junior partner, the Freedom Party of Austria (FPOe). For that matter, FPOe itself largely maintained its popularity likewise at 17.2 percent in the EU polls.

Kurz’s OeVP Is a centre-right party whereas the FPOe led by his erstwhile deputy Heinz-Christian Strache is nationalist populist (labelled “far right” by the leftist media).

Vice Chancellor Strache had to resign two Saturdays ago (May 18) because he was caught in a sting operation. The timing of the secretly filmed Strache tape (it was dropped mere days before the EU election; released to the public by extreme leftist German political magazine Der Spiegel) points to a political hit job.

Chancellor Kurz was thus forced to dissolve his coalition government and call an immediate election. Austrian President Alexander Van der Bellen has agreed for the snap poll to take place soonest by September.

19 thoughts on “Snap elections, collapse of the centre”