We’re 10 days away from celebrating the 62nd anniversary of Hari Merdeka.

And Dong Jiao Zong plus some segments of DAP are busy trying to save Chinese pupils from Jawi and khat.

Cukup kelakar to see all these heroic efforts at saving Malaysia from each other.

Before GE14, the DAP promised to #saveMalaysia.

They said they would do this by kicking out Umno and bringing back Mahathir.

DAP also said they would save Malaysia by stopping Lynas — see the party sec-gen holding anti-Lynas placard below.

Mahathir, however, has not stopped Lynas but chosen to green light the plant.

The Emperor makes unilateral decisions which his eunuchs then quickly kowtow to.

Guan Eng had once described Lynas as “nuclear”, “radioactive” and just waiting to “explode”. Now that Mahathir is A-okay with Lynas, the plant is no longer nuclear, radioactive nor going to explode.

Mahathir is really like the Old Man of the Sea. And Dapsters are actually like a zombie army.

Irony indeed. Because it is none other than DAP that has brought back the Old Man – a fabled character encountered by Sinbad the Sailor – to climb piggyback onto Putrajaya, grip its neck in a stranglehold and refuse to either let go or ever climb down.

BELOW: This is now … Last time Dapsters were truly convinced that exposure to Lynas ‘radioactivity’ would turn Malaysians into green-scaled mutants 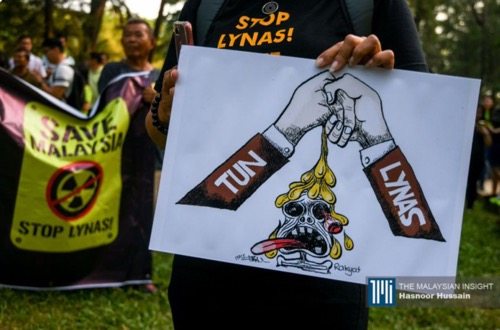 Umno and PAS too promise to #saveMalaysia. PAS really hates the DAP. So does Umno. Presumably the Umno-PAS combo will save Malaysia by kicking out DAP.

The two Malay-Muslim parties will hold mega rallies in KL to save Malaysia, just like Bersih once did.

Over the past 15 months, he said, some dangerous but unnamed threats “pit race against race, religion against religion to destroy the ‘Save Malaysia’ mission”.

BELOW: “Appreciating khat” … Kit Siang claimed also that learning the exquisitely beautiful Jawi didn’t make him less Chinese but instead made him more Malaysian

Kit Siang said despite all this race-religion pitting, Malaysia could nonetheless be saved and become “a model plural nation of unity, freedom, justice, excellence and integrity”.

All we have to do is follow the DAP’s Malaysian Malaysia model.

This would guarantee us rising above the mutual “fear, distrust, suspicion and hate of other races and religions”, and instead turning our country into a “haven of mutual trust and appreciation of each other’s different ethnic, cultural and religious identities”.

What kind of people can hate on khat?

A short clip of Teo’s panel discussion with AlHijrah’s Finaz can be viewed below.

@limkitsiang sorry but i find this true… Would you think so? Where did the Malaysian words come from? It is Roman? Or It is Jawi? pic.twitter.com/syQuWVdTQr

One thought on “It’s time Dapsters were honest with themselves”