Their essays lauding ‘diversity’ were published in the Sin Chew English portal on Aug 31. All three academics had largely positive messages, good intentions and their heart in the right place. See my blog post compilation yesterday.

For Prof. Tajuddin, diversity is not working out so well in the country. He sees Malaysia as remaining ethnocentric where some groups continue to display a “religious superiority complex”.

BELOW: Tajuddin, who became a DAP member in 2012, was often publicly touted by LGE and LKS

Not buoyed by false Hope

The bleak essay by Tajuddin is titled ‘A meaningless Merdeka’ and was published in Sin Chew on the eve (Aug 30) of our 62nd Independence anniversary. It’s a dire retrospect in contrast to the more upbeat tone adopted by the aforementioned trio of optimistic professors.

Malaysia, in Tajuddin’s opinion, “was failing badly before May 9th 2019” and post GE14, “has failed even worse after merely over a year”.

Looking deep and hard, the professor makes his prognosis that “Malaysia is on a certain road of destruction with the Malay Muslims driving it to the ground”.

He observes that “unless a miracle happens, Malaysia will be the first country to be listed as the ‘fourth world’ of a three world category. We will go nowhere …”.  Ouch!

ABOVE: Teresa Kok — cosplay but no destination, unlike compatriot Hannah who dresses up in tudung to go to the mosque

”I see no more hope for this country,” Tajuddin writes sadly.

The so-called Malaysia Baru is merely recycling “a 1990s come-back formula” with the same old, same old Politik Lama of race and religion.

Tajuddin’s reason for pessimism, post-regime change: Well, “the Old Malaysia has just been given a new lease of life by a heart-bypass“ merely.

BELOW: How can a nonagenarian be expected to materialize the New Malaysia?

Tajuddin cites the following symptoms to indicate how diversity remains a distant aspiration — among other things, there is the negativity – if not outright contempt – for Malaysian Indians as expressed by certain high ranking Muslim clerics; there’s the demonization of Dong Zong, the animus towards UEC shown by Malay political parties, etc.

On yeah, and not forgetting that foreign preacher fella who’s all the rage in the VIP dinner circuit. How can such a peddler of insults be having Happy Meals with grinning cabinet ministers? 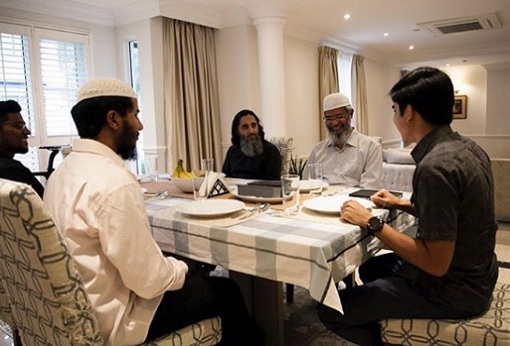 Emigrating is an option.

“If I were younger by three decades, I would take my family outside this country and resettle in others,” says Tajuddin, “or at least in neighbouring Singapore and the nations of Sabah and Sarawak”.

He advises: “Save yourself and your family …”. Hunker down. Tighten your belt and marshal your resources to place the kids strategically elsewhere.

“I have now begun to seriously think about such a strategy for two of my children. There is nothing here in Malaysia that would be anything of a dignified existence of a person,“ Tajuddin reveals.

“To save this Malaysia, our children must ‘leave the present Malaysia’ and embrace the future Malaysia that lies beyond its shores into a global and universal construct rooted in our traditional faiths and cultures,” he concludes.

To add my own two sen’s worth

Obviously this please–stay-in-Malaysia tweet by Hannah Yeoh is a bugbear with me since I bring it up repeatedly. In it, she urges young people, “Don’t change your country, change your government!”

I’ve always felt the above appeal by Hannah Yeoh to be intellectually dishonest, in particular when she herself is a failed applicant for permanent residence (PR) in Australia. Hypocrisy indeed.

The DAP’s 2018 success in changing the government has not brought hope for fresh grads to get jobs that actually commensurate with their degree-level qualifications. Furthermore, the labour market is softening under the Harapan regime, rendering youth employment prospects pretty dim across the board.

We can see how regime change has only benefited a small coterie of cronies – principally DAP evangelists like Hannah – and the likes of 26-year-old Pribumi cabinet minister Syed Saddiq who mooted ‘Gojek’, where young people will work riding motorcycles to deliver food or send paying passengers.