DIVERSITY, like ‘pluralism’, is a virtue-signaling word beloved of Harapan that they preach but don’t practice.

There is little diversity of political thought among Chinese voters because 95 percent of them support only one party — the DAP.

Where is there any plurality (having many options) when the Chinese electorate already obliterated MCA and other Chinese-based BN parties? How can the Hope people claim they love diversity when they had so fervently carried out the DAP command to annihilate MCA in the last election?

BELOW: Asyraf (seen on screen) speaking in PWTC last weekend at #HPU914 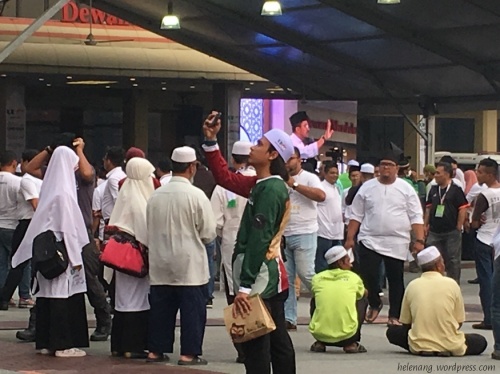 Harapan hypocrisy and their double standard

Umno Youth chief Asyraf Wajdi Dusuki spoke too about inclusivity and embracing his MCA and MIC brothers when he gave his speech at the Himpunan Penyatuan Ummah #HPU914 townhall last Friday.

Asyraf however was being more truthful. He also said that the Malays would necessarily be the “bangsa tunjang” and their Melayu culture and customs forming our “budaya teras”.

The Cina DAP Aduns (below) in Selangor apparently agree with Asyraf as they’re very gung ho about wearing tudung. 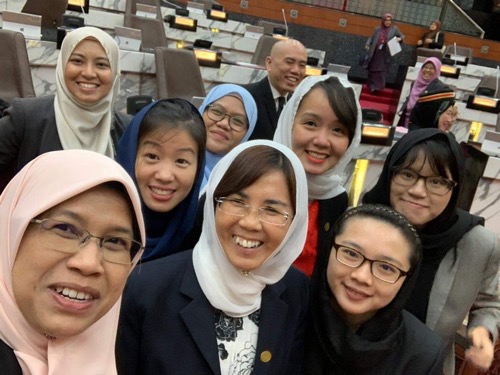 There is admittedly less racial and religious diversity in the opposition whose twin pillars are Umno (38 MPs) and PAS (18 MPs). Opposition parties MCA and MIC have a mere one MP each, i.e. Wee Ka Siong in Ayer Hitam, Johor and Saravanan Murugan in Tapah, Perak who are represented in our 222-seat Dewan Rakyat.

But what’s there to complain when pluralism is only something Harapan talk nicely but do indifferently? After all, Harapan is as much a race and religion-based coalition as ever BN was. 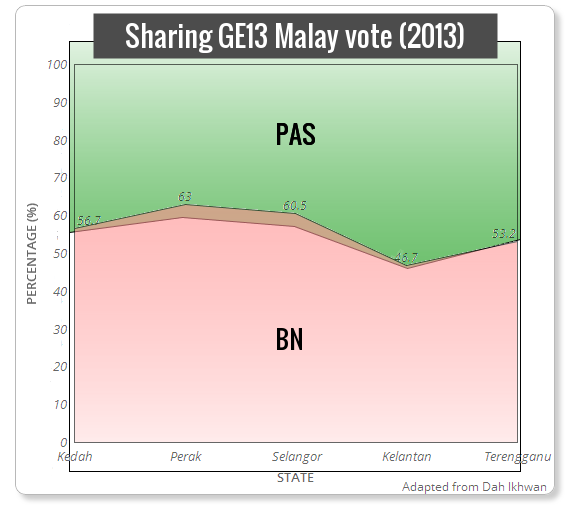 Umno and PAS fit together like hand and glove

The area graph above shows how Malays voted in the heartland states of Kedah, Kelantan and Terengganu as well as cosmopolitan Perak and Selangor in 2013. 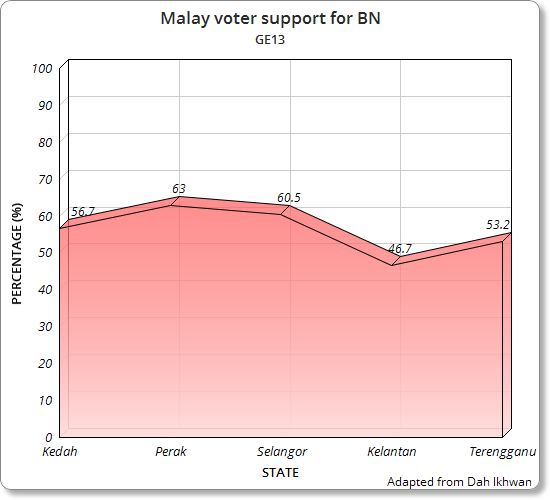 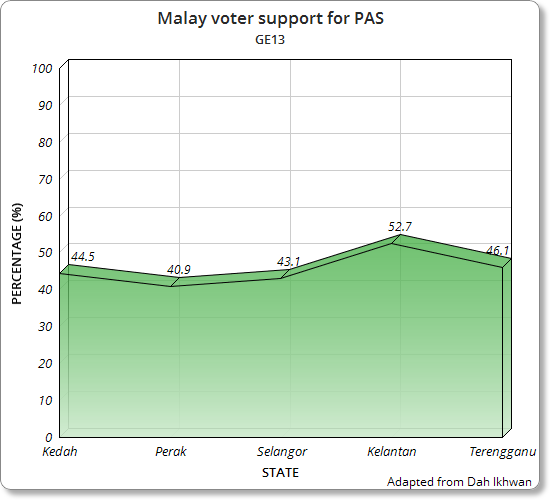 The above three pairs of voter percentages in the green crescent all add up to around 100%.

In Perak and Selangor, the multiracial dimension of their constituencies introduced a small overlap to the round 100 figure as the stats quoted represent the Malay vote for BN candidates and not for Umno’s per se. 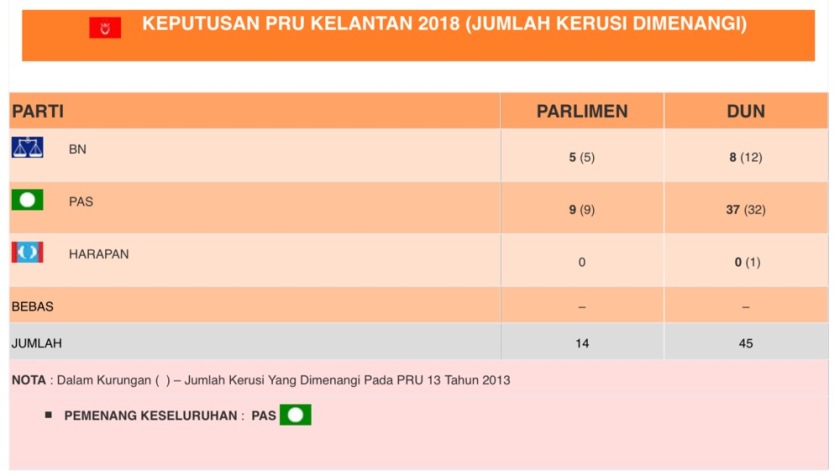 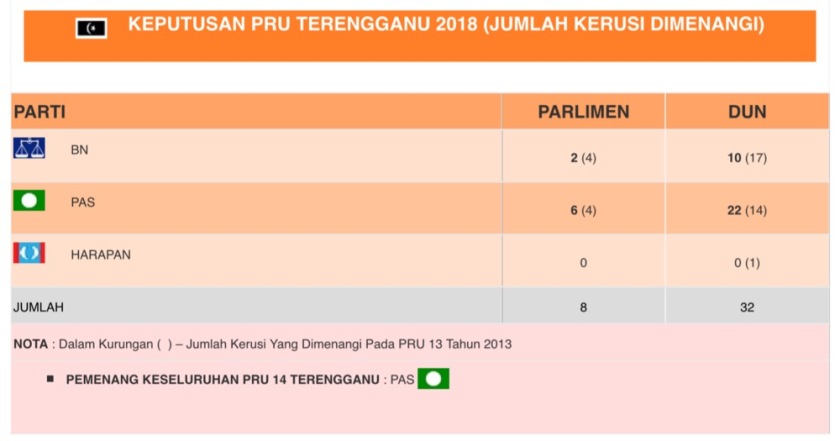 GE14 was a slightly different ballgame however as enter new parties Pribumi and PAN to siphon Malay votes away from the mothership.

Pribumi and PAN nevertheless failed to make a dent in Kelantan and Terengganu where the two Harapan parties were completely wiped out. The 2018 election result tabled above show zero seats for Harapan in both the east coast’s DUN and federal legislative assemblies. 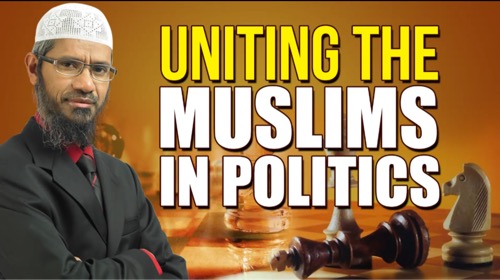 ‘Multiculturism’ is a bromide only swallowed by stupid Dapsters. Today these sheeple have been badly betrayed by the shepherds of their Harapan flock.

Multikulti Kit Siang previously condemned the then premier Mahathir (serving as prime minister Round One) for affirming Malaysia to be an Islamic fundamentalist state.

Mahathir’s religious fundamentalism was dubbed by Kit Siang as the “929 Declaration” and “617 Announcement” — the date ‘929’ referring to 29th September 2001 when Mahathir made a speech at the Gerakan delegates conference, and ‘617’ referring 17th June 2002 when Mahathir speaking in parliament had doubled down on his earlier ‘Islamic State’ stance.

DAP, in fact, was so hyped up about the Mahathir unilateral ‘Islamic State’ pronouncements that its central committee once threatened to take the PM to court (see url link above).

But what has become of our forked-tongued DAP’s supposed secular convictions post 509 — this date referring to the regime change that occurred on 9th May 2018.

BELOW: Zakir Naik drew a crowd in the tens of thousands recently in Kota Bharu 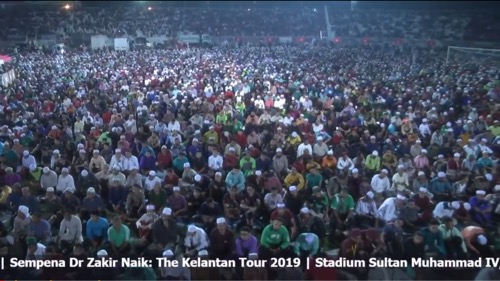 Father Lim Kit Siang and his Son pay obsessive lip service to Malaysia as a multiracial and multi religious country … for now at least.

Ethnic diversity in our country, however, is in reality evolving in quite a different direction.

Malaysia’s Chinese for example has been shrinking inexorably as a racial group — see century timescale graph below. 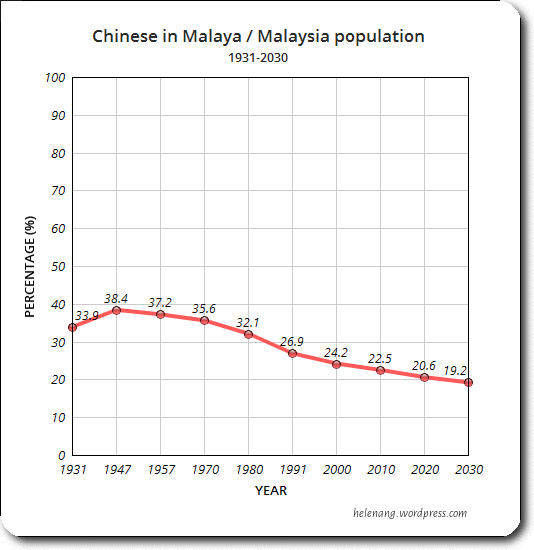 Today Chinese represent one-in-five out of every Malaysian. In another decade or so (year 2030), Malaysia’s Chinese minority will fall under the twenty percent threshold.

It is instead Malaysia’s foreign residents that have ballooned sharply in number.

BELOW: How to wave your hand ‘Abracadabra’ to cast a magic spell

There are currently 3.2 million foreigners residing in Malaysia. They cluster in the Klang Valley, Johor and Penang but it is Sabah that hosts the biggest colony of more than one million PATI (pendatang asing tanpa izin).

BELOW: M for Magick Numbers of non citizens

So even though Sarawak possesses a far bigger territory, it has a smaller population than Sabah. That’s because Sarawak unlike Sabah was not gifted ‘Project M’ — a lavish present from the Forever Emperor.

The Department of Statistics Malaysia also informs us that the annual population growth rate of non citizens is treble that of Malaysian citizens — see table above.

If all these non citizens in Sabah, the Klang Valley and elsewhere are granted Malaysian citizenship, our country will certainly be able to retain its racial diversity. But at the same time, Malaysia will also be become less diverse religiously as the new “guests” – to borrow Zakir Naik’s terminology – are mostly Muslim.

BELOW: More magic … Anyone remember the 70 million population target set by Mahathir when he first assumed his premiership 1.0? 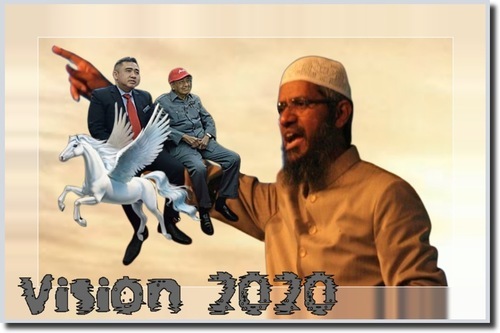 Honey, I shrunk our religious diversity

Malay women are having more babies. Therefore it follows that the Muslims will continue to outstrip non Muslims in Malaysia’s population ratio by faith.

The chart below produced by the Department of Statistics Malaysia shows the crude rate of natural increase for each ethnic group. In this foot race, Bumiputera are triply swifter than the Chinese who are Malaysia’s least productive people.

Apart from natural growth, the Muslim population is increasing apace thanks also to the active proselytizing movement led by Zakir Naik and his fellow intrepid preachers the likes of Muhammad Zamri Vinoth Kalimuthu and Firdaus Wong Wai Hung who have reverted many Indians and Chinese to Islam.

And we really must not overlook the DAP’s pool of pious people who relish dressing up in tudung to visit the mosque and break Ramadan fast. They’re a veritable blue ocean for conversion to Islam.

Segambut MP Hannah Yeoh gets even more mileage from her tudung than her compatriots, often displaying it at the pasar ramadan where she distributes buah kurma during puasa month. 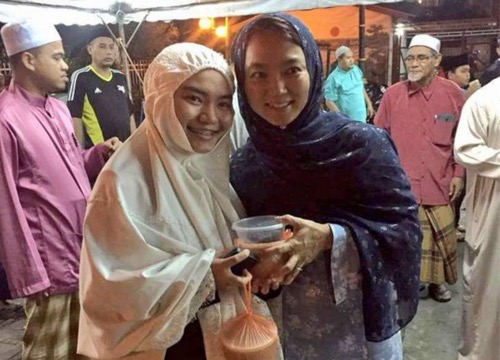 As Kit Siang and his party keep insisting, Malaysia’s multiculturalism encompasses diversity of religion. This aspect is essentially true of Malaysia but rare elsewhere.

In a vast majority of Muslim countries, Islam predominates among 80-90 percent and above of the population. The bar charts below list, in declining order, the prevalence of the Muslim-majority across the Islamic world.

The following countries are 99 percent Muslim: 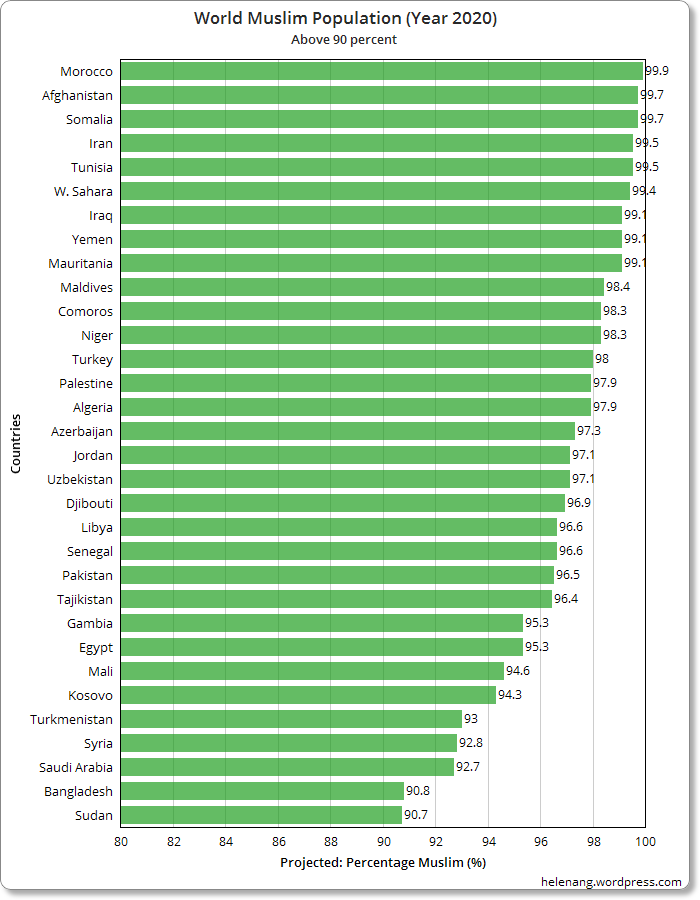 A total of 32 Muslim countries are religiously monolithic.

In other words, more than 70 percent of all Muslim-majority countries are homogeneous, meaning fewer than one inhabitant out of every ten there belongs to a religion other than Islam.

In fact, 25 countries or half of the world’s 49 Muslim-majority countries have a Muslim population of 95 percent and above.

In another 30 years (2050), Muslims will comprise 30 percent of the world population. 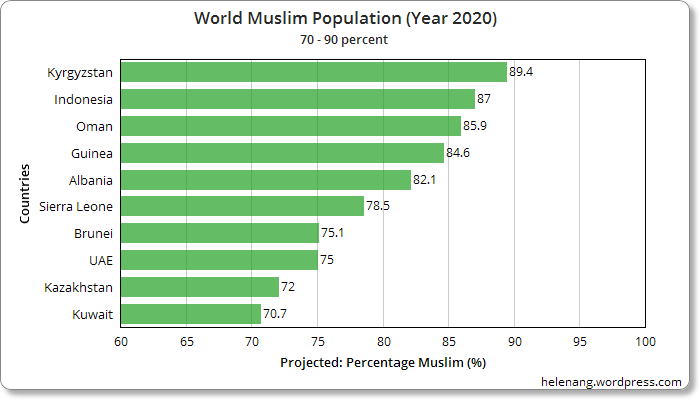 After #HPU914, DAP’s Islamophobia is showing

Himpunan Penyatuan Ummah is hashtagged #HPU914 with the numerals referring to September 14th, the date that Umno and PAS inked their take on the Medina Charter.

This coming together of the two Malay-Muslim and Muslim-Malay parties sent fire ants crawling up the DAP’s pants.

Previously DAP taiko Lim Guan Eng had screamed that the PAS-Umno pact was tantamount to “a declaration of war” against non Malays.

These rants from spooked DAP leaders telegraph either their duplicity or their stupidity. Which is it?

Afghanistan is a failed state where the population is homogeneously Muslim (99.7%). It’s fair to say there is no diversity in Afghanistan. On the other hand, the same can’t be said about our country which is multiracial and multi religious … as the DAP’s confused Bangsa Malaysians keep insisting.

BELOW: Kit Siang is blowing a gasket every day

Third proof that HPU National Co-operation Charter is Charter for Fake News and Hate Speech – upsurge of fake news and hate speech on social media exploiting 3Rs to depict a false picture of DAP as anti-Malay, anti-Islam and anti-Royalty – https://t.co/J2mNoh37tF

Why this intense hysteria from DAP at the PAS-Umno hookup? Have they forgotten their own vehement insistence on Malaysia’s multiculturalism and religious pluralism?

Four out of every 10 Malaysians are non Muslim and what more represented by DAP parliamentarians and Aduns. Now, what’s missing is only diversity of political representation.

DAP and Pribumi jumping into bed together is politics as usual.

PAS and Umno doing the same is no harbinger of Armageddon. DAP must stop spreading lies, fake news and hate speech.

9 thoughts on “Umno-PAS get 95% Malay support okay what”