Lim Kit Siang can sink no lower. He has become nothing more than Mahathir’s apologist-in-chief.

His diversionary response to the Mahathirist rally held yesterday at Malawati Stadium in Shah Alam proves it.

The Malay delegates had pledged their support for several resolutions made by the congress. One of the resolutions was that top government positions must be reserved for Malays only (see news report below).

‘Top govt positions should be for Malays only’ https://t.co/ZzqbzD6rj0#thesundaily #Malaysia pic.twitter.com/Jd4F7kApOJ

And how does Kit Siang respond to the insistence that only Malays can be allowed to hold top jobs in government?

(We mustn’t forget that Kit Siang’s boboi, as Finance Minister, is the top non Malay in Mahathir’s government.)

Lim Sr diverted by pretending to be puzzled why Mahathir’s congress had failed to bring up “the infamy, ignominy and iniquity of Malaysia as a global kleptocracy for almost a decade and the upsurge of fake news and hate speech to incite inter-racial and inter-religious polarisation and conflict”.

Kit Siang also asserted: “Malaysia becoming a global kleptocracy is in fact the single factor which had caused the dignity of both the Malays and Malaysia to reached [sic] the lowest ebb in history, yet there is no mention whatsoever about it”.

BELOW: There is good reason that Kit Siang is dubbed Men-Hen, i.e. Menteri Hal-Ehwal Najib

“Yet there is no mention whatsoever about it”

The DAP godfather is a one-trick donkey. All he can do is bray, “but but but … Najib”. Nowadays his party dare not mention anything whatsoever about the many things done by Mahathir ever since the DAP began picking crumbs off the master’s table.

And Kit Siang had rather slag our country as “a global kleptocracy” than address the ugly rhetoric of Mahathirism spouted at yesterday’s mono-racial event headlined by none other than the Harapan chairman.

He moans and groans about “the upsurge of fake news and hate speech” but tightly shuts both his eyes to the ‘real news’ of Amanat Mahathir.

The depth to which this DAP Father is willing to sink in order to preserve his Son’s cushy job in the Mahathir cabinet is epic.

“There were those who hoped that the Malay Dignity Congress yesterday would play the important role to torpedo the unity, cohesion and purpose of Pakatan Harapan but the opposite has taken place.”

Meaning: By insisting “the opposite has taken place”, LKS is spinning that the Mahathir Congress has instead strengthened Harapan’s “unity, cohesion and purpose”.

”Those who had had hoped that the Malay Dignity Congress would help to destroy the Pakatan Harapan government are most disappointed, and Malaysians, regardless of race, religion or region, must continue to be united, loyal to the principles of the Constitution and Rukunegara, patriotic, mature, visionary about Malaysia becoming a top world-class nation and never lose hope in resetting nation-building policies to achieve a New Malaysia.” 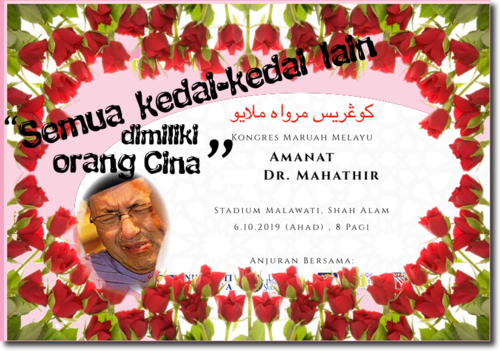 The DAP’s Malaysia Baru is led by a 94 year OLD autocrat still wedded to his Malay Dilemma race polemics of five decades ago.

In his keynote speech yesterday on 6 Oct 2019, as well as in his Shared Prosperity Vision 2030 blueprint, Mahathir proved himself unable to let go of his more than half century-old obsession about the Chinese being wealthier than Malays.

Not only is DAP enabling Mahathir and the Perkasa-like elements he is patronizing, Pribumi’s Chinese running dog is also siccing its Rottweilers on legitimate critics of Mahathir.

DAP is beyond redemption.