If the Tanjung Piai byelection was a landslide, then Mahathir is the one suffering from an avalanche of rocks raining on his head.

In his media statement Rama also said, “The non-Malays, especially the Chinese […] will continue to cast their protest votes in future unless Harapan changes its present course”.

“Especially the Chinese” have been casting sticks and stones at their former Beloved Tun in the social media following the MCA win.

Najib noticed the stoning and observed in his Facebook post (below) that DAP is the black hand behind the move to scapegoat PM#7 for the Tg Piai debacle. 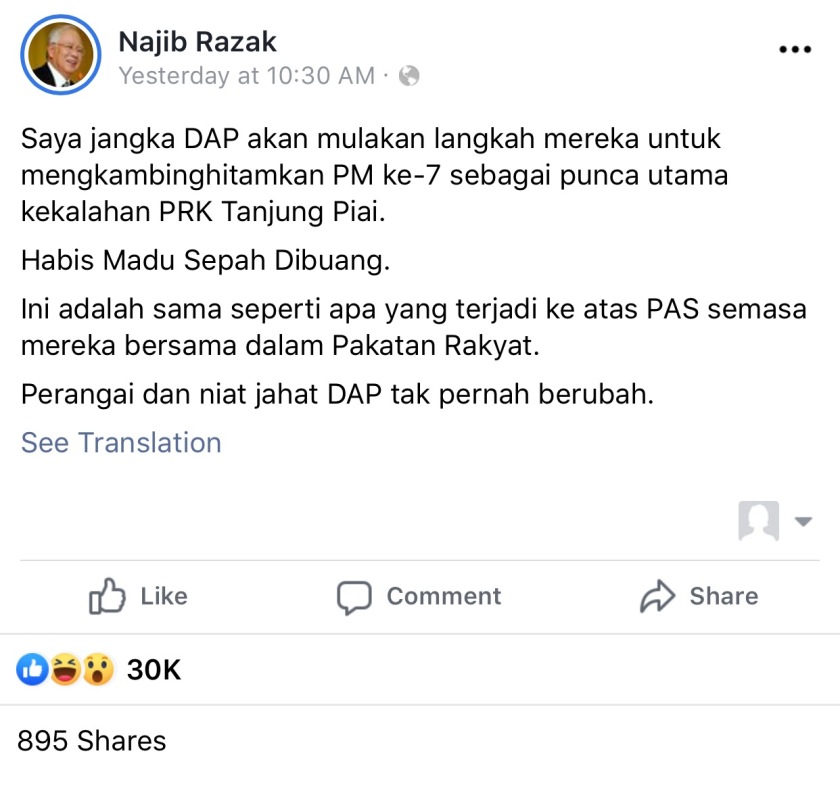 DAP as chess players think they’re smart but really they’re not, only sneaky.

Moreover Mahathir is intelligent enough to calculate that the loss of his party candidate on Saturday was less due to the ‘pull’ factor by MCA than to a ‘push’ factor by X.

So who is X? Who has political clout over 95 percent of Chinese voters?

Mahathir is not taken in by the Chinese opera now playing because he himself is a seasoned Tok Dalang in wayang kulit. Under present circumstances, he will just claim that useless DAP is now unable to bring home the Chinese vote for Harapan.

If DAP even remotely figure that Mahathir  ‘Recalcitrant’ Mohamad will succumb to the orchestrated public pressure from cursing Dapsters, then the party should think again.

Watch Mahathir dig in his heels and crush the deranged Bangsar Malaysians under his jackboot.

Me? I’m a happy camper and getting my popcorn and humming the cheery tune below.

Come on, sing along with me!

“Listen to the music of the moment, people dance and sing
We’re just one big family … Umno, PAS, MCA and Em-Aye-Cee”

Mahathir must finish his term so as to mega trigger the DAP horde to burst a blood vessel.

His trademark smirk and sarcastic tone gives them an aneurysm every time. High five!!