Unlike Malay children who are Muslim, the Chinese [who belong to religions other than Islam] don’t recite the Quran, the ex-premier said in an exclusive interview with a Malay daily. “Tulisan Jawi untuk budak-budak Islam, budak-budak Melayu. Kita nak kena baca Quran. Kita kena tahu Jawi.”

Unlike the DAP which was all acquiescence for Jawi to be injected into the Chinese school syllabus, this issue had never arisen with regard to the MCA previously. “Tulisan Jawi ini dulu tak kita minta MCA terima pun,” Mahathir added. “Kita tak bangkit perkara itu.”

The relevant replies by Mahathir can be accessed about 14 minutes into the video — click HERE. 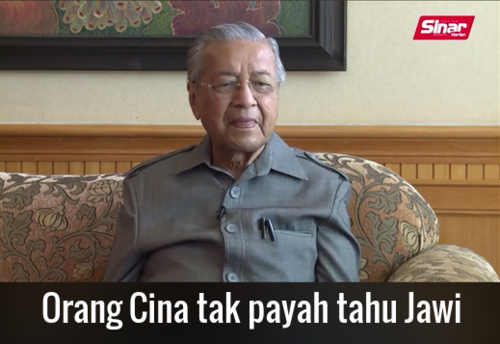 In the hour-long interview, Mahathir explained that throughout the 60 years spent by MCA within the BN government, the question of introducing Jawi or khat in Chinese schools was not on the table. “Dulu selama 60 tahun kita memerintah, kita tak pernah dengar MCA tolak Jawi pasal kita tak suruh dia belajar Jawi.”

A video of Sinar Harian‘s wide-ranging discussion with the nonagenarian was today released in the media outlet’s Facebook.

The DAP’s over-eager embrace of khat also seemed to befuddle Mahathir who gave a little laugh when asked to comment.

Despite objections by Dong Jiao Zong on the controversial matter, Lim Khat Siang & Son preferred instead to coerce Chinese schoolchildren to just accept the new Islamic-flavoured curriculum. Is it so that potential Malay voters might be disabused of the widespread notion that DAP is anti Malay/Islam?

If yes, how selfish of the party! Even little kids are not spared the DAP’s entirely self-interested politicking.

BELOW: But rather Lim Guan Eng is “anti” MCA (and its Chinese higher education jewel in the crown)