Survey teams had found that Rohingya “who lived in rural areas could not speak any indigenous languages of Myanmar well. Rather, they spoke, wrote and read Bengali and Arabic,” said a Rakhine Inquiry Commission report (below).

“They could not write or read the official Bamar language used in government communications,” added the government report published in July 2013.

BELOW: Like Hew Kuan Yau (the Face of DAP Ceramahs) who sides with China, some Rohingya who lived in Rakhine sided with Bangladesh over Myanmar — click to enlarge

Britain ruled Burma as part of British India from 1824 to 1948. During the same period, Britain also created the Straits Settlements in Malaya (1826).

The historical truth is that Muslims living in Arakan were Bengali speakers brought as immigrants into Burma from Chittagong by British colonial rulers, according to an 1881 population census. Such a situation arising from imported mass foreign labour was replicated in Malaya similarly during our own British rule.

Myanmar to this day officially identifies descendants of the Muslim community in Arakan (Rakhine) as “Bengali” and in 1982, went to the extent of enacting a new citizenship law that effectively rendered these Rohingya stateless.

BELOW: Rohingya is a Bengali sub dialect — click to enlarge

The first published use of the word ‘Rooinga’ was in 1799 but the Rakhine people counterclaim that “there is no firm historical evidence for the use of this name”.

“The word ‘Rohingya’, it is claimed, was first suggested by Abdul Gaffar, an MP from Buthidaung, in his [1951] article The Sudeten Muslims,” according to an IPS report last year on Burmese Muslims.

So then around the 1950s, these fifth to sixth generation Muslims resorted to reconstructing themselves under the more politically expedient term ‘Rohingya’.

We can see a similarity here when in the 2010s, some “Saya Bukan Cina” third to fourth generations – e.g. Lim Guan Eng and Hannah Yeoh – tried to politically reconstruct their race as Anak Bangsa Malaysia rather than ‘Chinese’.

When the Rohingya cross the border to Chittagong in the neighbouring country of Bangladesh today, they find an environment where the local dialect spoken is a cousin language. When Lim Kit Siang visited his ancestral Tongsan village in 2008, he too was able to communicate with his Fujian China relatives in their mother tongue.

“This country is a very basically unstable country. Everybody said when we become independent, the Malays will seize the properties of the non Malays and, well, expel the non Malays. And this happens, happens in many countries. It happens in Myanmar, it happens in African countries when they became independent, they kicked out what they called ‘immigrants’. But in this country we gave to the people who had no citizenship, one million citizenship was given.”

Sailing from Tongsan in a tongkang

The following write-up was first published in my blog on 19 June 2015 under the title ‘What if Kit Siang hijacked Tun’s “800 years” Rohingya illogic?’

Lim Kit Siang is only a second generation Malaysian.

His father sailed to Malaya from Tongsan and worked here in a pig farm castrating swine as well as poultry “so that they could grow faster for consumption” — source: “There’s nothing to stop us from being Malaysian first” (The Nut Graph, 6 June 2011)

Now imagine if Kit Siang were to claim that the Chinese have been in this country over 600 years. This is technically true but limited to the Malacca Baba Nyonya.

If the DAP stalwart were to take a leaf from Dr Mahathir’s Rohingya book, then the DAP Mursyidul Am can jolly well claim that his party is the voice of the Chinese who have already been in this land for more than six centuries. (Well, Dr M is playing this card for the Rohingya.)

This claim is certainly not true of the vast majority of the Chinese whose parents and grandparents were the recipient of close to two million en masse citizenship not too long ago between 1952 and 1960.

“This country [Myanmar] claims that the Rohingya are not their people. They’ve been there for 800 years, much longer than the Chinese in Malaysia. The atrocities committed are terrible. They killed and burned people, they beat people to death. In this day and age, people should not behave like that. Asean [the Association of Southeast Asian Nations] should do something. If necessary, I think I would expel this country. It’s terrible. The whole world should boycott this country.”

I shall dissect the following sentence – “They’ve been there for 800 years, much longer than the Chinese in Malaysia” – which Tun had previously stated a few times before.

Tun is referring to the wave of migration by the Bengali Muslims from Chittagong (today in Bangladesh) across the border into Arakan during the 12th and 13th centuries which tallies with the figure “800 years” that he cited.

‘Rohingya’ is an expedient construct (akin to ‘Anak Bangsa Malaysia’)

Dr Jacques P. Leider (pix below), who is an expert in Arakan history, says that ‘Rohingya’ is “a political label” that this group of people have given themselves to claim an identity in the 1950s (a bit – but not exactly – like Hannah Yeoh and her DAP Firsters insistence on constructing the bangsa ‘Anak Malaysia’).

Dr Leider explained why he does not consider “the Rohingya an ethnic group of Burma”. (Note: The government of Burma does not recognize the term ‘Rohingya’.)

“When you argue we are Muslims and we have been living in Rakhine for several generations, nobody can deny it. For me, Rohingya is the term, which is an old word that has been claimed as above all as a political label after the independence of Myanmar. For the moment, I do not see that all the people there readily submit to one and a single label. When I was in Bangladesh, people pointed out Muslims to me who originally lived in Rakhine. They have now moved to Bangladesh and when you ask them, ‘are you Rohingya coming from Rakhine?’ they say, ‘no, we are Muslims who live in Rakhine, we do not take for us the label Rohingya’.”

Note: Rohingya is not recognized by Burma’s 1982 citizenship law as a “national race” and therefore they are left stateless. Other Muslim groups though – for example the country’s indigenous Kaman people – are regarded as Myanmar’s national races. 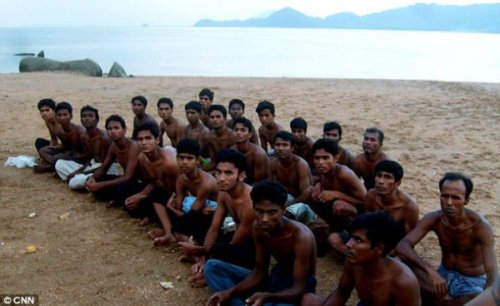 “The following census assessment shows the increase of population of the various ethnic/religious groups inhabiting Akyab District [old name for Sittwe, the capital of Rakhine] according to the census reports of 1871, 1901 and 1911. There was an increase of 155 percent in the population in the district. According to the reports, even in an interior township Kyauktaw, the Chittagonian population increased from 13,987 in 1891 to 19, 360 in 1911, or about seventy-seven percent in twenty years.”

“The heyday of the migration was in the second half of the nineteenth century after opening of the Suez Canal, for the British colonialists needed more labor to produce rice which was in growing demand in the international market.” – credit U Shw zan and Dr Aye Chan

From the data above, it is seen that during the period of the British Raj, a quarter of the population of Arakan (today’s Rakhine, Myanmar) was born in Bengal. This is like the situation in Malaya some three to four decades prior to Independence and the huge Chinese and Indian non-citizen, resident population that swamped and almost exceeded the natives.

The significant number of minorities belonging to different religions is a by-product of the colonial economy in the Asian and African lands which were under the rule of the British empire.

Explosion of Muslim population in Burma after British conquest

“After three Anglo-Burmese wars over a period of 60 years, the British completed their colonization of the country in 1886, Burma was immediately annexed as a province of British India, and the British began to permeate the ancient Burmese culture with foreign elements.” – source, http://www.cfob.org/HistoryofBurma/historyOfBurma.shtml

Note: “… the British began to permeate the ancient Burmese culture with FOREIGN elements”.

That’s what the British did to almost all their colonies, for example, in Fiji. They brought so many Indians into Fiji that the Indians, who formed a slight majority, managed to take over the government through the democratic election process.

The Indian (Hindus) elected government was toppled by the indigenous Fijians who are Christians through a coup d’etat. The Methodist Church played and continues to play a strong role in the country’s coups and politics.

See also, ‘The 2014 Fiji Elections and the Methodist Church’ by Christine Weir

Some of the Muslims from Chittagong entered Burma as seasonal workers (also called “floating population”) similar to the Chinese coolies in Malaya in the earlier part of the 20th century who were “a transient labour force”.

BELOW: From the book The Origins of Malay Nationalism by William Roff, 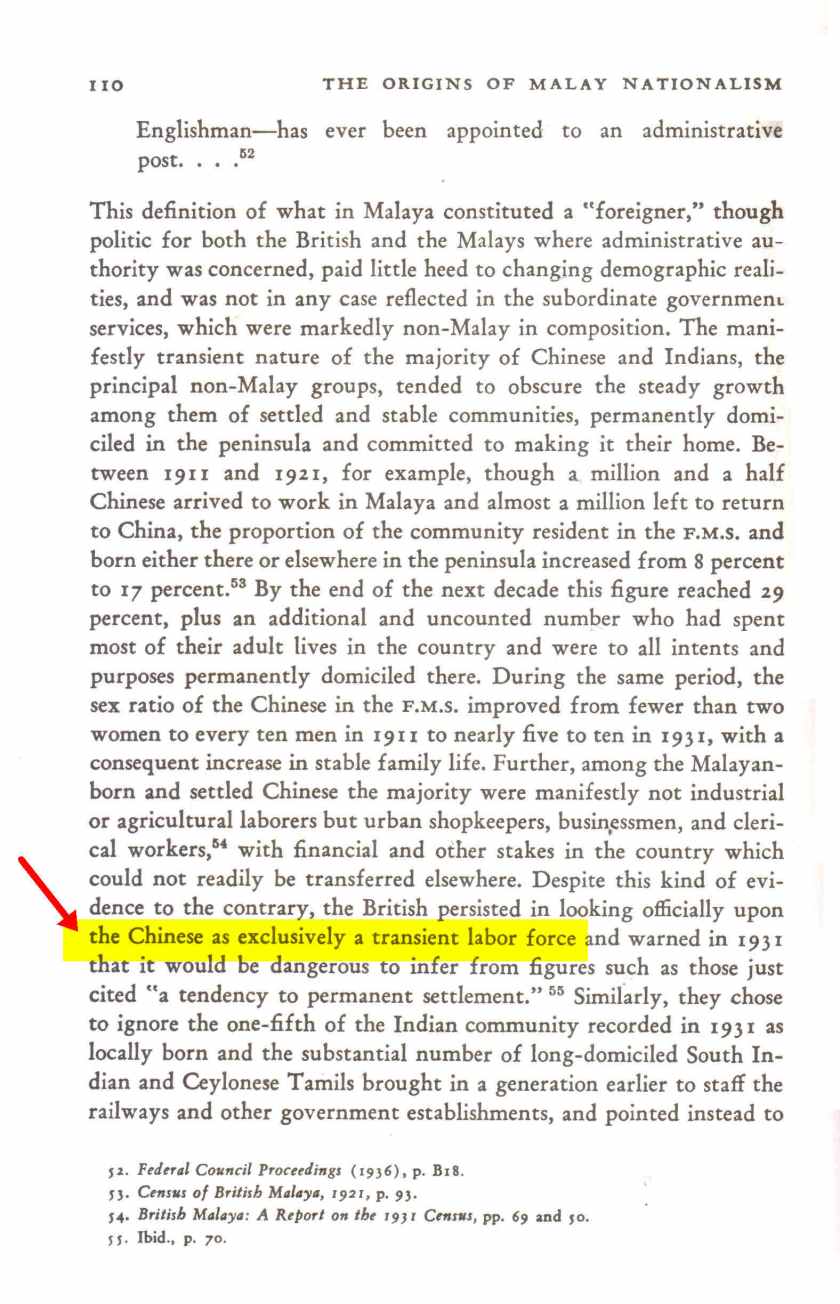 “Sittwe District alone was getting more populated. For example, a total of 58,235 Muslim in 1872 had increase to 178,642 in 1911. The Bengali migrants came initially as seasonal workers but began settling permanently in Arakan.”

“The dramatic increase in Bengali-Muslim settlement had occurred due to the Government of Burma Act of 1935. A moratorium on Indian immigration after 3 years of enacting Government Burma Act was discussed and signed by Galon U Saw (Parliamentarian who became Premier in late Cononial Burma) and Hsaka? (the Indian Parliamentary Leader).”- excerpt translated into English at http://www.netipr.org/policy/node/39 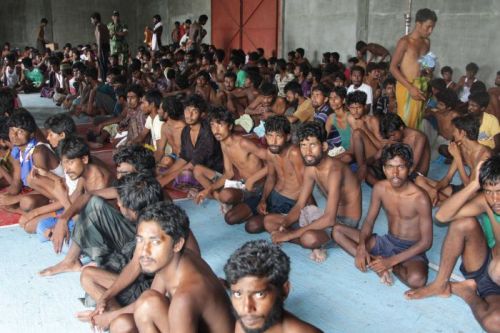 Tun is the master polemicist

There were Muslim communities in Burma since 800 years ago just as there were Chinese communities in Malaya since 600 years ago. The Kelantan and Terengganu kampung Chinese are much older than the ones in Selangor and Perak (descendents of the mass immigration wave) but the Cina kampung Pantai Timur are also much, much smaller in number.

The bulk of the Chinese live in the West Coast and they are keturunan pendatang. They’re not Peranakan and not Baba-Nyonya.

If Tun persists in his “800 years” claim for the Rohingya, then there’s no reason for the DAP ideologues not to copycat the ex-premier’s modus operandi in making such an extravagant claim similarly.

The DAP can also then claim 600 years lineage for all Chinese, across the board, as well as stake a corresponding Chinese claim to indigeneity (indigenous status) in Malaya.

One thought on “Explaining Mahathir’s sleight of hand on ‘Rohingya’”