To place the immigration* number of 2,302,139 Chinese on its proper scale, consider Malaya’s tiny population back then.

Before the year 1916, figures were recorded for Chinese coming into Malaya but not the numbers going out. Like the Bangladeshi workers today who leave for home after finishing their stint here, the last century Chinese came to work in Malaya but after staying some years, they similarly returned to China.

From 1916 onwards, figures are available for both Chinese “immigrants” (coming in) and “emigrants” (going out).

The biggest population transfer occurred in the 1920s, as pointed out by Rais Yatim yesterday.

Between the years 1920 and 1929, a total of 2.3 million Chinese immigrants* came to Malaya at a time when the total population (including Malays and everybody else) was only less than four million. 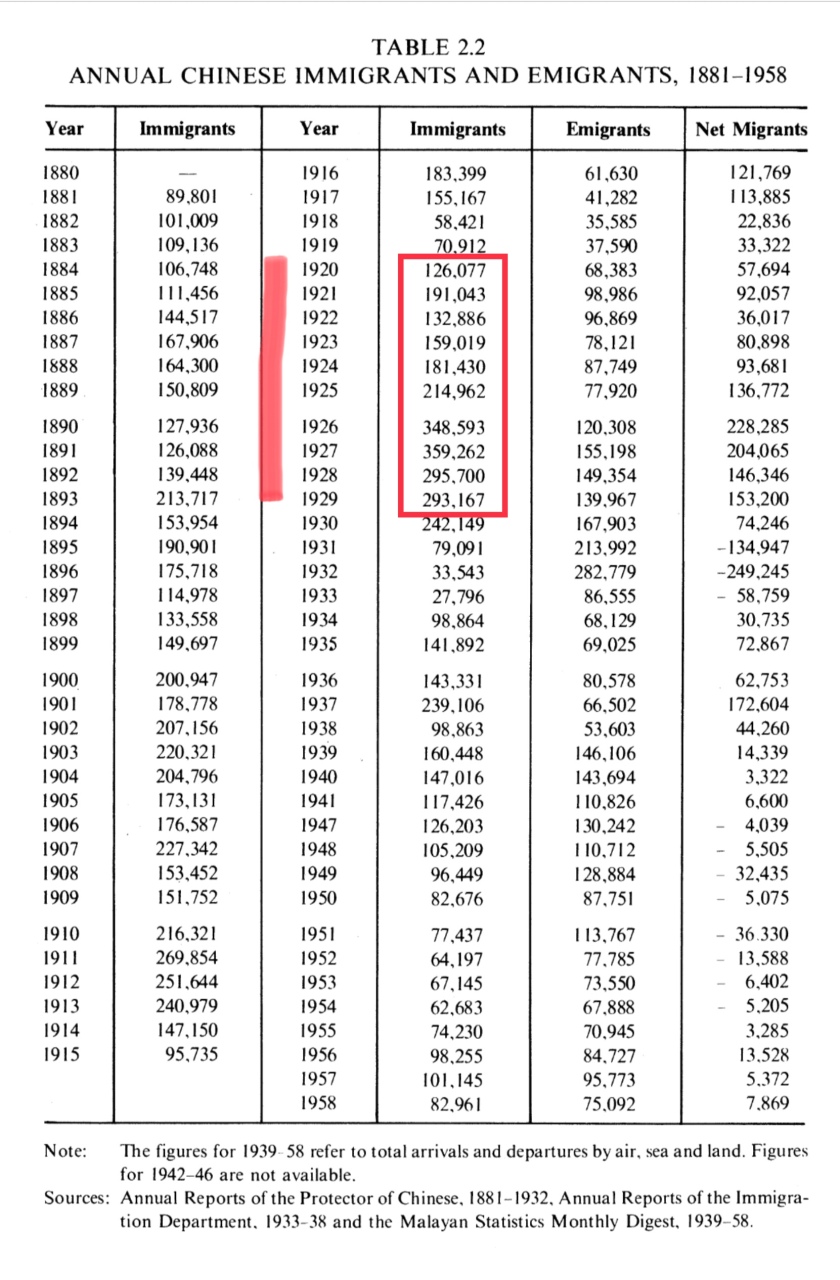 (The table above is collated by statistician Prof. Saw Swee Hock and can be found in his book The Population of Peninsular Malaysia.)

Speaking BM only to order teh tarik at kedai mamak

Yesterday there were more than 200 comments by Malaysiakini subscribers, with many screeching that Rais Yatim is a “racist”. Some were offended that Rais had seemingly compared non-Malay immigrants to Malaya in the 1920s to Rohingya.

Fact: A Burmese government commission of inquiry into Rakhine (the Myanmar state from which the Rohingya fled) found that Rohingya “who lived in rural areas could not speak any indigenous languages of Myanmar well”, rather they spoke Bengali and Arabic. The 2013 Rakhine Inquiry Commission official report also found that Rohingya “could not write or read the official Bamar language used in government communications”.

Hmm, does the description of Rohingya incompetency in the Burmese language ring any bells?

It’s been a hundred years since the peak of Chinese immigration to Malaya when the window thrown wide open 1925-29 let in between 200,000 and 350,000 Chinese into the Malay peninsula, annually.

And where are we as a country today? Answer: See photograph below because a picture truly speaks a thousand words.

Photo description: MCA’s Wee Ka Siong was the only Chinese in the room when PM Muhyiddin convened his first cabinet meeting.

There were 6,695,700 Chinese Malaysian citizens the last time our Department of Statistics did their 2019 population projection. The Chinese community is 6.7 million strong in Malaysia but only one Chinese MP is a full minister.

I do not blame the Putrajaya administration for this. Muhyiddin has been fair given that a mere five percent of the Chinese electorate voted for the ruling coalition, and he even appointed three Chinese non MPs (MCA senators) as deputy ministers.

Instead of scrumming around Rais Yatim, why don’t the Harapan supporters first ponder on the end journey that led to the photo below.

The lack of ethnic (Chinese) diversity in Muhyiddin’s cabinet corresponds exactly to the lack of diversity in thought and political opinions among Chinese voters.