On May 25, an African American named George Floyd died in police custody. Four days later on May 29, a Minneapolis white cop is charged with third-degree murder for his death.

Today America is burning from coast to coast.

When an innocent white woman Justine Damond was fatally shot by a black cop – also in Minneapolis – in July 2017, there were no riots.

But the liberal media as usual blame Donald Trump for George Floyd’s death at the knee of a police. 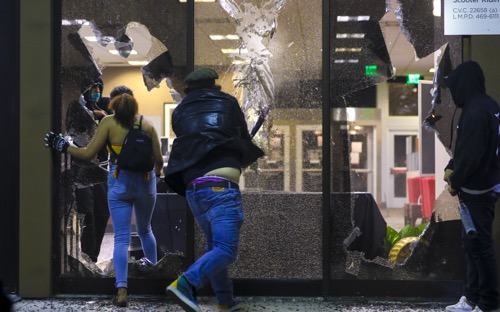 Rioters this week looting in the name of George Floyd were seen crashing into banks and smashing ATMs with crowbars. Above is a scene from Union Bank in La Mesa, San Diego on May 30. The second picture below shows the bank set ablaze.

How is stealing money from cash machines restoring “justice” to the dead George Floyd? How are carting away flat screen TVs, air-cons, microwaves and other loot from stores construed as righteous acts in protest of racism?

Even Mom-and-Pop businesses owned by blacks were vandalized and destroyed in the George Floyd riots sweeping the USA.

BELOW: Signaling virtue with her ‘Justice for George’ placard amidst smoke and fire 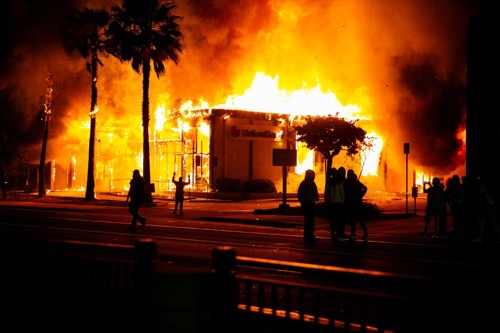 So why do the African Americans feel mired in perpetual victimhood, egged on in their outrage by white virtue signalers and social justice warriors (SJWs).

President Trump and the Department of Justice will be designating Antifa (white SJWs) as domestic “terrorists”. This is deserving for their suspected role as the agent provocateurs deliberately inflaming the current riots.

Black woman curses out a group of white #Antifa members who handed a brick to young black kids and instructed them to use it.
Left-wing terrorists are awakening more black Americans than I ever could to who our true enemies are. #Trump2020 pic.twitter.com/JZxm6T8u8r

Let’s look at their ideologues to get an idea of the victimology diet that the African-American community feeds on. Frontpage Mag compiled a list of ‘America’s Top 10 Black Racists’ — which helps to illustrate the rewarding black grievance industry.

Coates is also the foremost promoter of the rubbish ‘reparations’ argument, i.e. a demand that third- and fourth-generation descendants of African slaves (who were never slaves themselves) deserve financial compensation to be paid them by the present-day American government for the slavery of their ancestors.

BELOW: Coates considers the Obama presidency as eight years of unfulfilled black power

No.2 on the Frontpage list of black racial chauvinists is New York Times columnist Jamelle Bouie.

I’ve never before heard of the BLM personalities (3) & (4) but I can certainly agree with the magazine that opinionated writers Bouie and DeVega carry a big, black chip on their shoulder. DeVega’s Twitter timeline for example is peppered with the epithet “white trash” with which he name-calls The Deplorables and their leader-in-chief.

Try reading the grievance mongers Coates, Bouie, DeVega, Blow or Robinson and their endless angry whinging about black victimhood, and you can begin to understand one of the triggers to the passive-aggressive rioting.