‘Hundreds of Rohingya come ashore in Langkawi’ is the headline this morning in the NST.

As Malaysian coastguards approached the people-smuggling boat, 53 Rohingya jumped into the sea, the paper reported.

A statement by Malaysian authorities also said the Rohingya boat had been intentionally damaged.

Mahathir: ”Their drowning will be because they sank their own boats” (1979)

These bocor bot, terjun laut tactics being employed by the Rohingya in order to hold our Malaysian coastguard hostage should already have been anticipated. They had previously pulled the same trick off the coast of Aceh to force the hand of the Indonesians.

The present Yang Berhormat member of parliament for Langkawi once famously said of the ethnic Chinese refugees fleeing Vietnam: They are illegal immigrants, and we have every right to expel them.

“If they try sinking their boats, they will not be rescued,” Mahathir said of the refugees. “They will drown. Their drowning will be because they sank their own boats, not anything else.” — 16 June 1979

News on Mahathir’s plan to tow the Vietnamese boat people back to international waters was reported by Reuters and carried by the New York Times on its front page (below), by the South China Morning Post and other newspapers around the world.

NYT headline: Malaysia to Put 70,000 Refugees Back Out to Sea

“Being humane has not paid off for us at all,” the Deputy Prime Minister said. “All we are getting is a further inflow of Vietnamese illegal immigrants, and we have every right to expel them.”

Dr. Mahathir told reporters that the deportations would start immediately and continue as boats could be made available or built to carry the refugees. He said “shoot-on-sight” legislation, would be enacted as soon as possible in this session of Parliament.

Malaysia’s refugee population has been estimated at 70,000 to 80,000, and most of them are ethnic Chinese. The Malaysian Government has refused to accept any of the refugees as permanent settlers.

Estimates of the total number of refugees in Southeast Asian transit camps have ranged from 125,000 to more than 300,000. A Vietnamese diplomat said last month in Jakarta while attending a 24-nation meeting on the problem that 400,000 to 600,000 others wanted to leave the southern part of Vietnam. He was defending his Government against veiled charges that it was forcing tens of thousands of ethnic Chinese to flee Vietnam.

But Dr. Mahathir said: “As third countries are not accepting as many refugees as there are coming, we will start sending all the Vietnamese illegal immigrants in the country out in boats to international waters in stages.”

The Malaysian minister acknowledged that this would take time, but he said special funds would be set aside for building boats and for other measures to get the Vietnamese out of the country.

He said that coastal patrols would also be intensified and that the special army force of two battalions set up to turn away refugee boats would be strengthened.

‘Will Not Be Rescued’

“If they try sinking their boats, they will not be rescued,” he said of the refugees. “They will drown. Their drowning will be because they sank their own boats, not anything else.”

Dr. Mahathir rejected an appeal by the United Nations High Commissioner for Refugees, Poul Hartling, for continued compassion toward the Vietnamese. He said the commissioner “should make appeals to countries that are receiving Vietnamese illegal immigrants to increase their numbers of acceptances rather than call on countries in the region not to turn them away.” 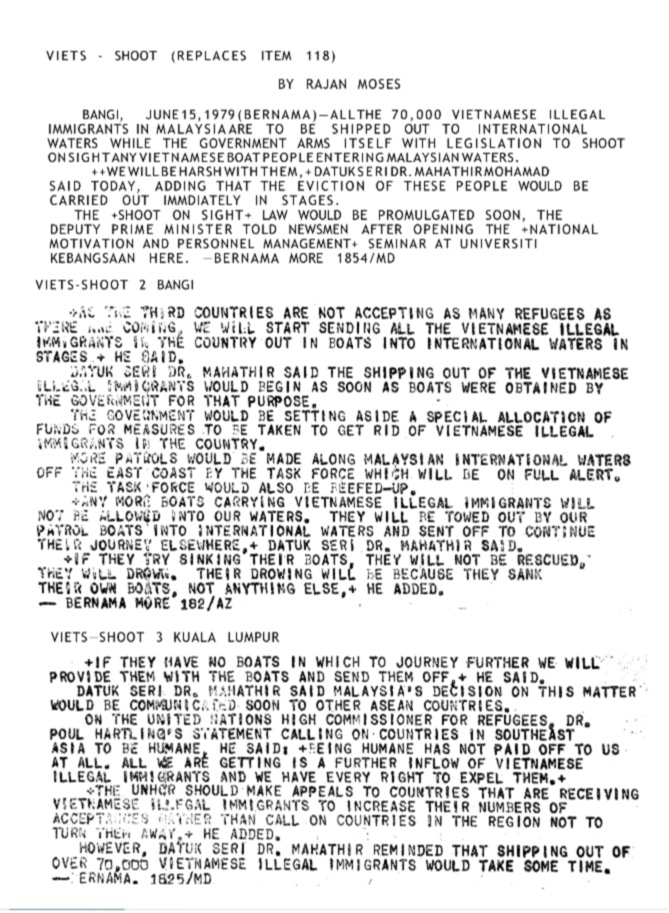 4 thoughts on “How come Muhyiddin never learned from Mahathir?”