Xenophobia is prevalent in Malaysia, said a report today in Vice Media headlined ‘Malaysia Is Planning to Send a Boat Full of Rohingya Refugees Back Out to Sea’.

There has been a “shocking” amount of online hate speech from Malaysians about the Rohingya refugees, as well as several anti-Rohingya groups and personal blogs, Vice quoted Liz Day as saying. In other words, Malaysians are haters.

It’s not surprising that Westerners are parroting this view when locals are busy telling international media that Malaysians are full of hate. It was barely a fortnight ago that DAP Christian activist Heidy Quah complained to the British media about Malaysia’s “new wave of hate comments and xenophobia towards the refugee community”.

Previously, they told the world that our country was racist to non Malays. Now they’re saying Malaysia is racist, xenophobic and cruel to Rohingya. The loudest voices slamming Malaysia and Malaysians on the Rohingya issue are Chinese Harapan supporters.

BELOW: Heidy Quah posted in her Facebook that “No taxpayers money goes to supporting the refugee community”

Public support for welcoming Rohingya comes from all races. Public opposition to taking in more of them – there are already 200,000 Rohingya in Malaysia – similarly cuts across the races. However the stand adopted by Malaysian authorities is to seal our border against the Rohingya.

We’re carrying out Ops Benteng, which is a coordinated effort by many government security agencies, to keep out illegal immigrants. Our Home Minister is a Pribumi Malay, Defence Minister is an Umno Malay and the Muhyiddin administration is one supported by Malays.

On the other hand, the Perikatan Malay government is not considered as legitimate by DAP supporters. In the matter of the Rohingya boat people, pro-government Malaysians are for secure borders whereas the anti-establishment Malaysians want to throw open our doors wide.

“With a steadily declining population ratio, there is limited role Chinese Malaysians can play in this country,” lamented Sin Chew Daily editor-in-chief Kuik Cheng Kang a few days ago on Thursday. Malaysian Chinese are today one-fifth (20.6%) of the country’s population. Chinese number a little less than seven million (6,947,000) out of the 34 million (33.8m) residents in Malaysia which include 3.3 million non citizens.

The Chinese are however learning to offset their “limited” and depleted political clout with a ballooning Christian self-righteousness.

Pious DAP evangelistas, although a minority in number, are nonetheless taking on an outsized role of moral majority exemplars — that is, acting as if they’re the good Christians who only want to help Rohingya in contrast to the bad Malaysians who want to keep Rohingya away from our shores.

BELOW: DBKL restrictions on the Rohingya in Selayang are criticized by the Cult of Woke (Note: Rahmah is a reporter formerly with Malaysiakini and The Star.)

Yesterday (June 20) was World Refugee Day and this is how Malaysia decided to celebrate it? https://t.co/Rp5YIqMlA1

The Sheraton Move was executed four months ago on Feb 23. This Malay manoeuvre caused the DAP to suddenly lose power like a row of dominos toppling over. In quick succession, Harapan fell in Johor, Malacca, Perak and Kedah resulting in many, many DAP Aduns losing their exco jobs.

Not only did the changes of government cause a return to status quo ante, DAP were also deprived of their influence in four state governments at various hierarchical levels the last 120 days. More importantly, the chain reaction from Sheraton also pushed back the foothold DAP had increasingly gained within the Malay community.

Anwar‘s Malay followers in PKR are now turning away from the DAP in disgust. Earlier the PKR Malays (Azmin‘s faction) and Pribumi Malays (Muhyiddin’s faction) had ditched the DAP too.

Fast haemorrhaging its Malay support, the DAP urgently needed a new way to recover these vital voters. Thus we see DAP evangelistas trying to outdo even the PAS Muslims in their expressed public concern for Rohingya boat people.

But why zoom in specifically on the Rohingya? Answer: Because they’re Muslim and this allows the virtue signalers to one up their Christian charity against the “inhumane” Malay Muslims who favour putting a cap on Rohingya immigration.

The Rohingya hot button issue enables Malays to be virtue shamed into believing that as a part of the ummah, they’re not living up to the moral obligation of Muslim brotherhood. DAP’s revolving door ally Mahathir even called the decision by our immigration enforcement on the Rohingya boats as “tindakan tidak berperikemanusiaan”.

BELOW: Rohingya are a textbook example of the world’s most unassimilable minority 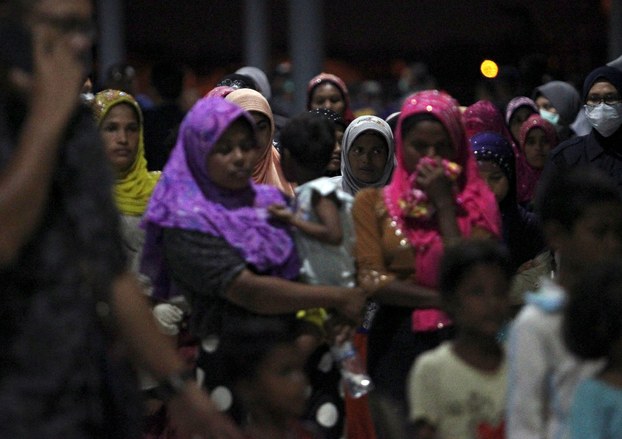 Weaponizing the plight of Rohingya to undermine Malays

In the same June 18 op-ed, Sin Chew‘s top editor Kuik Cheng Kang was anxious that “Chinese Malaysians can no longer put all the eggs in the same basket, as they did in GE14”.

And what was the secret recipe of DAP’s success? Orang Melayu terkesan when they were endlessly told that they were racists, extremists and bigots.

The DAP’s severe shaming strategy had kicked off during GE12 and the name-calling continued through GE13 and GE14. This overkill eventually caused the Malays to largely stop caring about whatever negative labels were incessantly slapped on them.

Therefore a different tactic is currently required to be crafted after the smears of racism, once so effective in the past, are beginning to lose their sting.

So badmouthing the Malays is presently taken to the next level — the whole world must be made to echo how cruel Malays and their “backdoor” Perikatan government are because of the xenophobic hate purportedly directed against Rohingya.

And Malays must be made to feel Muslim guilt in addition to having their conscience pricked over the race ”privilege” they supposedly enjoy. These tactics are straight out of the Black Lives Matter playbook.

The inverse power relations between American blacks and guilt-ridden whites at a time when Democrat cities are burning from riots across the USA shows how the minority can psych the majority into submission.

BELOW: This blonde bombshell felt so guilty over her white privilege (and George Floyd’s death) that she willingly bends the knee to plant kisses on the jackboot of her black bullies — screen capture from @BeachMilk tweet embed; more footage in this video clip

4 thoughts on “When have they ever had nice things to say about our country?”