Senior minister Ismail Sabri today demanded an apology from Al Jazeera for its Locked Up in Malaysia’s Lockdown critique by filmmakers Drew Ambrose and Jenni Henderson. 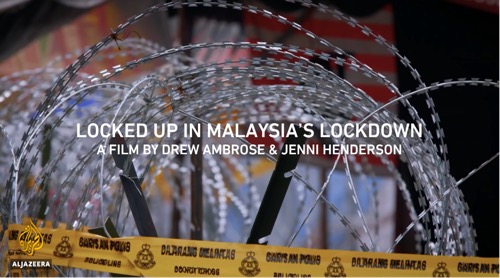 The Al Jazeera film (above) on undocumented immigrants in Malaysia, which was uploaded online only three days ago, has been viewed some  (update) more than one million times on YouTube.

It has so far received 2,300 thumbs-up and 206,000 thumbs-down. But in Malaysia, the always vocal minority are adept at bullying the usually silent majority.

Below is a screencapture from the Al Jazeera interview where an unidentified foreigner currently living in Malaysia complained to the Qatari cable network that the value of PATI here is “just like a dog only”.

The canard that “ugly Malaysians” see and treat illegal immigrants, particularly Rohingya, as “dogs” did not start with Al Jazeera this week. Such a smear has been widespread for quite a while already.

Back in April, Malaysiakini published a letter – see below – by Liberasi activist Michelle Liu which alleged “there are Malaysians who actually believe that Rohingya are like dogs”.

It’s shocking that Michelle and her like-minded activist friends have been going around (social media) portraying Malaysians as an “unkind” and “inhumane” society of Nazi wannabes who are unable to see PATI as fellow human beings.

Not only are the virtue signalers condemning Malaysians as “tak berperikemanusiaan”, they’re also slandering those of us (who want our national borders secured) as xenophobes. We’re accused of viewing the dark-skinned foreigners in our midst at the same level as an animal — refer Michelle’s “dogs” accusation.

Another scene from the Al Jazeera film screencaptured below had a Bangladeshi man complaining about “a total, a clear act of racism” by our immigration authorities.

This accusation of “racist, Racist, RACIST!” against the Malaysian majority is even older. A couple of months ago in May, I had blogged kesian … ‘It’s Raya and Malaysians are being badmouthed round the globe’. 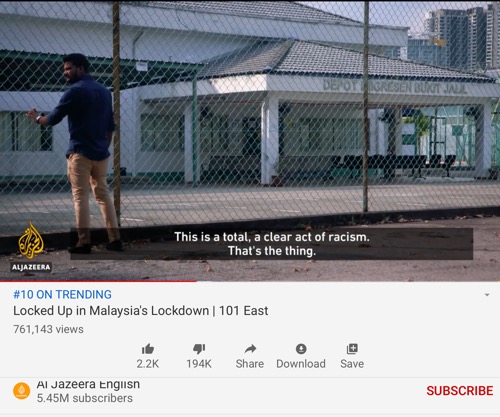 The pro-Harapan Malaysians have been telling the world nonstop about how racist our country is, so much so that Malaysia has been ranked the second-most racist country in the world by stats and data compiler Index Mundi.

For details on our purported extreme racism and religious bigotry as perceived by disgruntled Malaysians who complained to Index Mundi, or more usually usually to sympathetic Western power brokers, see my earlier post titled ‘Do these people have any love at all for M’sia?’

In a nutshell, these people have been so effective in convincing the international community how ordinary Malaysians are racist that we’re now sitting in the No.2 spot (behind top-ranked South Africa) among 76 countries surveyed for racial discrimination.

It was only last month when DAP Christian activist Heidy Quah complained to the British media about Malaysia’s “new wave of hate comments and xenophobia towards the refugee community”.

The latest salvo comes from activist Rachel Tan (see above) who is very insistent that there is a “xenophobic spiral” in Malaysia.

She also points her finger at the usual targets whom her ilk are fond of accusing for supposedly spewing “hate” at immigrants.

Ismail Sabri may be miffed at Al Jazeera but its 25-minute short film is only a one-off. It is the many, many Michelle’s, the Heidy’s and the Rachel’s yang asyik buat asakan bertubi-tubi.