Trigger a snap poll, I mean.

BELOW: Team Musa — 33 Aduns … this group photo is simply classic! It ranks alongside my favourites like Muhyiddin’s first cabinet meeting and the Sheraton Move plotters in Mahathir’s house 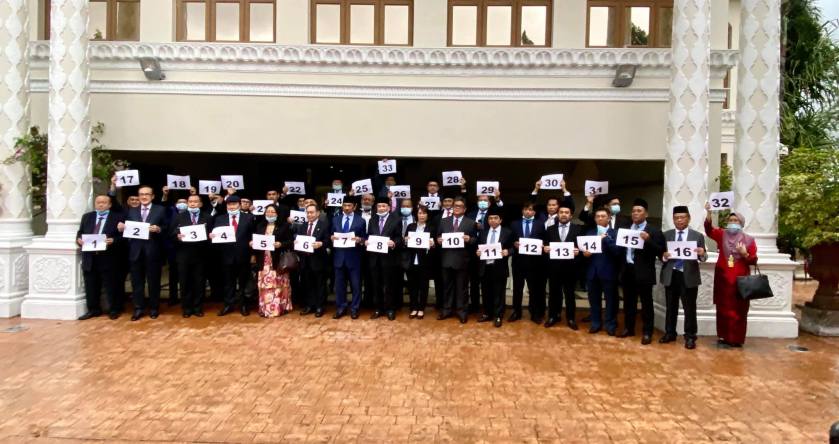 So, Shafie’s Sabah government lasted 26 months, 18 days — which is at least a tad longer than his mentor Mahathir’s federal government which lasted 21 months, 14 days.

And after two rounds of Mahathir with the first being 22 years and the second 22 months, the power-crazy DAP had still wanted Dapsters to swallow Round Three (six months only what, we promise) of the racist nonagenarian.

BELOW: Kit Siang’s pol-sec Syahredzan is one of those with a short memory

DAP are manipulators of facts and ppl. Have you forgotten the result of GE14 in Sabah where

Ppl who believed the @dapmalaysia hv got their mind empty.

An empty mind is the Devil’s DAP’s playgrnd.https://t.co/swak7go9AV

Umno’s Musa Aman had actually headed the Sabah government for two days immediately following the last general election because it was BN that won the “rakyat’s mandate” in GE14 to govern the state.

The BN Sabah state government was overturned by Harapan on 12 May 2018 through frogs enticed to jump to Pakatan Plus.

Yet now the hypocritical Harapan people have the cheek to try and stake the moral high ground when Shafie’s Warisan administration was established through defections from BN in the first place.

Hypocrisy is synonymous with Harapan!

BELOW: Hannah is the Mama of All Hypocrites — recall how she came up with creative excuses for Anwar’s 2008 attempted takeover (by enticing MP from BN) through his ‘Sept 16’ move to capture Putrajaya

The math favours Muafakat, for sure

Hannah tweets above that they will “show Malaysia the way to deal with traitors in Perikatan Nasional”.

Read what I blogged back in January 2012 about Hannah’s hypocrisy in my post titled ‘901 & 916: Anwar tak pandai matematik’.

If Zahid rises to the challenge, the majority of voting-age Malaysians are emphatically with him. We’ll show Malaysia the way to deal with DAP.

Warga yang cintakan tanahair will sweep out the evangelical party from remnants of those state governments where their evangelista Aduns are clinging on with their grubby claws in the state exco.

Snap election will allow patriots to take back Negeri Sembilan and if God wills it, Selangor too. Pray for Malaysia.

BELOW: A strong Muslim government will not allow them to get away with a 44-storey high cross, as seen being lit last year on the facade of Grace Residence condo in Jelutong, Penang

One thought on “If Shafie can do it, so can Zahid”