#Gravitas | A genocide of Uighur Muslims is underway in Xinjiang, but the Islamic world has chosen China's money over China's Muslims.
The principle of 'Muslim brotherhood' is being selectively used. On #GravitasPlus, @palkisu challenges top 5 Islamic leaders to speak up.

Mahathir is a living legend when it comes to the Muslim world’s top hypocrites, says a high profile WION editor. WION is an English-language broadcaster headquartered in New Delhi covering international news.

In her challenge to five Islamic leaders – with Mahathir coming in at No.4 – WION news anchor Palki said (watch video below) they had all failed to lift a finger to help the Uighurs in Xinjiang.

They “bowed their head in silence”

Mahathir styles himself a preeminent Defender of the Muslim Faith.

He can be heard on the world stage usually screaming the loudest against any Muslim persecution and even going to the extent of once convening his own war crimes tribunal to name and shame oppressors of the poor Palestinians and Iraqis.

However with regard to those responsible for treatment of the Uighur presently, WION detected a willful blindness on the part of Mahathir whose hypocritical fudge relevant to the Uighur issue starts at minute 11.50 in the video below.

In her separate interview two weeks ago with Mahathir, Palki had him cornered — remarking:

“So on the one hand, you raise concerns about the Muslims in India which has the second highest Muslim population in the world and you make sweeping statements but on the other, you say that you will not stand up for the Muslims in China because China is a powerful country; have I got this right?”

To Palki, Mahathir returned a most lame response: “Well, our relationship with India and with China [is] not quite the same”.

According to him, India is more willing to accept criticisms whereas China not so much. Hence it is hardly surprising that Mahathir prefers to avoid any “confrontation” with the other superpower of our bipolar world.

With democratic countries like India, Mahathir is quick to mouth off whereas he studiously avoids making open statements on the Chinese taiko. With China, Mahathir could only manage the weak excuse, “We will do things in our own way.”

Talking to Beijing will get one nowhere, Mahathir had to concede. Nonetheless he still expressed his optimistic belief that the Chinese communist government can somehow be persuaded to adopt a more liberal approach to its country’s Muslims.

The WION anchor is clearly flabbergasted at the wobbliness of Mahathir’s weasel words. 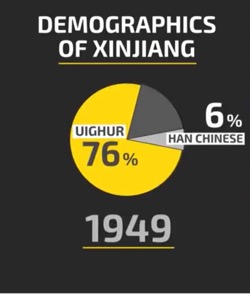 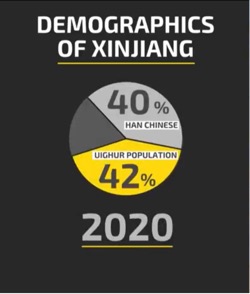 Becoming an ethnic minority in their own land

Xinjiang is China’s most militarized province and an all-encompassing surveillance state.

It was called East Turkestan before the region was annexed by China in 1949 and renamed in Chinese. Its native people are of Turkic origin and Sunni Muslim.

BELOW: The Uighurs are resisting China’s attempt to Sinicize them 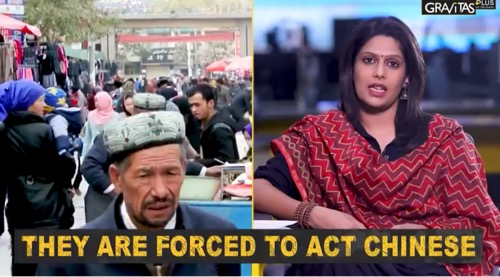 An undetermined number of Uighur men and women are being interned at ‘re-education’ camps by the Chinese authorities. There they are subjected to political indoctrination / communist ideology and coerced to learn and to follow Chinese mores.

In the middle of last year, Mujahid Yusof – the then Harapan Minister of Islamic Affairs – was taken on an official visit to Xinjiang.

Following his inspection of the camps, Mujahid reassured a worried Malaysian public that adult Uighurs were only in “vocational training centres” and being trained in sewing, flower arrangement, the arts (patriotic songs and cultural dances), legal knowledge and other life enhancement skills. They are taught Mandarin too.

Xinjiang is pivotal to Beijing’s One Belt, One Road (Obor) edonomic initiative. Also at stake are immense riches as Xinjiang holds one-third of China’s natural gas reserves and 38 percent of its coal reserves.

Although Xinjiang has already been successfully overwhelmed by Han Chinese immigrants, Beijing nonetheless continues to impose more and more religious curbs on its Muslims, including a 2017 Chinese law that restricts the length to which men are allowed to grow their beard.

Other Muslim practices as well have been suppressed over the years, including Ramadan fasting and observance of halal.

BELOW: Will Mahathir ever call out the Xi Jinping regime the way he called out Aung San Suu Kyi?

Mahathir and his Chinese Christian acolytes are totally unrestrained when attacking Myanmar for the country’s treatment of Rohingya but they’re as quiet as church mice with regard to the Uighurs.

Reason: Unlike Myanmar, China is not a small, isolated country plus China has many vocal local defenders.

“Will they ever call out China for the ethnic cleansing of the Uighur Muslims?” WION’s Palki Sharma asks rhetorically. Replying to her own question, she says: “I already know the answer but I’ll still wait for the day when this challenge is accepted.”