Oh dear. This post is getting a lot of views. I’m afraid the pet lovers are clicking, thinking my story is about a cute kitten named Karma. The usual English expression is “Karma’s a bitch” but I thought the word ‘bitch’ kinda rude to be put in the headline, so I replaced it euphemistically with something the opposite — “sweet little kitty”.

I apologize to those misled by the title who clicked only to find a political flashback instead.

Dr Kua Kia Soong is having the last laugh. Two-and-a-half years ago on 5 Jan 2018, Dr Kua’s op-ed critical of Mahathir was published in Malaysiakini.

He was told by pro-DAP readers to “Stop bitching“, “Stop whining like a bloody BN dog“, and immediately whacked black-and-blue by Tun’s legion of Dapster apologists.

BELOW: My cat Simba wants to share his Super Rings with Dr Kua 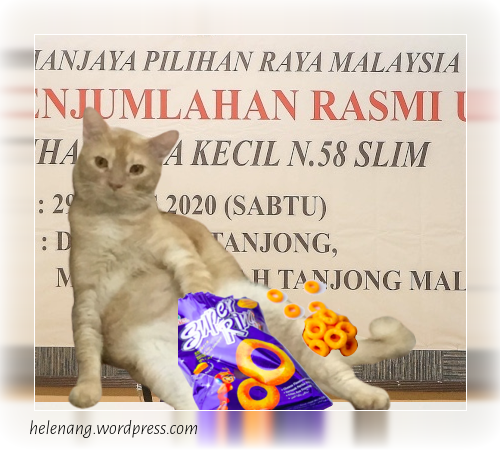 I noted the bullying in my blog post on the same day which I titled ‘Dapsters want to lock up Dr Kua Kia Soong and throw away the key‘.

Some of the Malaysiakini subscribers in their comments had challenged Kua to contest GE14 as an MCA candidate and making “Mahathir his main issue”. Kua was mocked by them, “see how many votes you can get”.

We now know that the DAP “eunuchs” (‘eunuchs’ is how Malaysiakini columnist Thayaparan currently describes the evangelical party) sapu 95 percent of the Chinese votes the last election.

With our benefit of hindsight and to reply the Malaysiakini reader’s comment-from-the-past below, my answer is that Kua would likely have gotten only five percent of the Chinese votes as well as lost his deposit if he had contested. But never mind, milk for kitty cat is a dish best served cold.

For being skeptical of Mahathir, Dr Kua – back in January 2018 – was told off by many Harapan supporters to “grow up”.

He was called “a bloody Chinese disgrace” for refusing to join the DAP cheerleading the old man’s takeover of the Harapan opposition bloc.

More numerously, the DAP mob urged Kua to “move on”. If he cannot, then baik “tutup mulut balik tido” or better yet “just get lost”.

For daring to swim against the Chinese current, Kua was chided — “Frankly you are rubbish“. He was also called a hypocrite, berated as “a born loser!”, as being “very sick mentally” and advised to “see psychiatrist”.

“Fuck off Kua, rakyat happy with Mahathir” wrote one Malaysiakini subscriber below.

Others from the same set of Malaysiakini subscriber comments castigated Kua as “petty”, “just being emotional”, “sulking”, having a “narrow vision“ and as someone who will never be able to match up to Mahathir in “calibre”.

He was moreover lectured to learn to be “a forgiving person” (NOTE: Kua was ISA-ed by Mahathir in 1987), accused of harbouring “a vendetta”, being on a “quest for vengeance” and labelled ”a bitter man”, and “a person who is still living with his 20th century demons“.

‘If only this Kua Kia Soong can be as magnanimous as Tun Dr Mahathir,” somebody remarked. One commenter going by the moniker ‘Cogito Ergo Sum’ wrote: “we have moved on (from DAP’s own previous criticisms of Tun) because we are magnanimous and better human beings”.

Someone else commented: ”If you [Kua] are a Christian, may God forgive you.” (Helen: Nah, I don’t think KKS is a Christian.)

One Dapster (below) even wished that Tun Mahathir had put KKS in jail forever while another said, “Thank God you’re not in DAP”. — click to enlarge

When Kua Kia Soong was consistently cautioning the Harapan people against pinning their hopes on Mahathir, he was – quite ironically – brushed off as merely “flogging an old horse”. He was admonished to “Stop harassing the nonagenarian” and reminded to “look on the bright side”.

”Let it go, Kua, and you will feel better emotionally and spiritually.“

Ultimately, Kua was curtly informed — “your opinions clearly do not represent nor articulate the aspirations of a cross section of Malaysians (the ones who care, anyway). Perhaps from now onwards you should call your NGO as Suara Saya Sendiri”.

Time to take your own advice and ‘love thine enemy’

I just want to belatedly respond to one comment above by White Raven7519 who said (quote) “… Kit Siang has forgiven Mahathir for the sake of saving the country. You [Kua] are a small minded fellow who should crawl back into your selfish hole”. — click to enlarge screencapture

For my belated response, I’m quoting Malaysiakini columnist Thayaparan who wrote yesterday in his column, “the ‘Chinese’ community was getting scraps from the table”. The table scraps were thrown to DAP by master Mahathir during the 22-month Harapan stint in Putrajaya. Good chihuahua, woof woof.

Thayaparan further said, “The former prime minister’s description of how he castrated the finance minister’s role […] is the kind of lesson in Malay uber alles politics that Harapan, or whatever is left of it, should pay attention to …”. 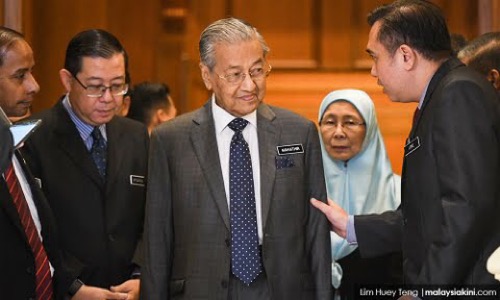 One thought on “Karma is a sweet little kitty, meow”