Lim Kit Siang earlier banged his gong that the gomen’s Chinese New Year SOP is no good — see below.

Chinese New Year SOP is best proof of the government’s failure to have an “all-of-government” and “whole-of-society” strategy and approach in the war against Covid-19 pandemic https://t.co/zMoHKoyw1Q pic.twitter.com/BxwmNjJ26U

The next day his son Guan Eng also banged his gong about the CNY SOP, complaining that gomen “appears to ban home celebrations in preference to pasar malams”.

He added in his press statement that the SOP was “not just insensitive to the Chinese community but downright disrespectful”.

Guan Eng’s statement via FB is in English and Chinese. His Malaysian First father Kit Siang should remind him about using bahasa kebangsaan.

CNY is celebrated by Chinese people.

Lim Guan Eng has already loudly proclaimed that he is “not Chinese” (see below). He should leave the commenting to MCA — the Malaysian CHINESE Association.

Furthermore, why is Guan Eng celebrating CHINESE new year when he is not Chinese? 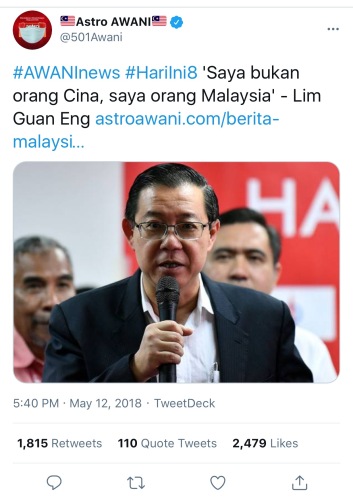 Guan Eng additionally remarked that “there is something very wrong and surreal” about this current gomen.

He wants to know if the cabinet ministers are “detached and disconnected from reality” — see below.

Are the Cabinet Ministers so detached and disconnected from reality that they do not realise that the SOPs make no sense and makes Malaysians look silly?
_______

But what in our country is really “surreal” and “detached and disconnected from reality”? Is it the delusional Dapsters?

The Malay Mail reported yesterday on Guan Eng’s unhappiness about not being consulted over the CNY SOP when he and his party – see below – had obtained 90 percent of the Chinese vote.

Err, so the DAP’s core voters are really Chinese and not the colour blind and beyond race Malaysian Firsters? 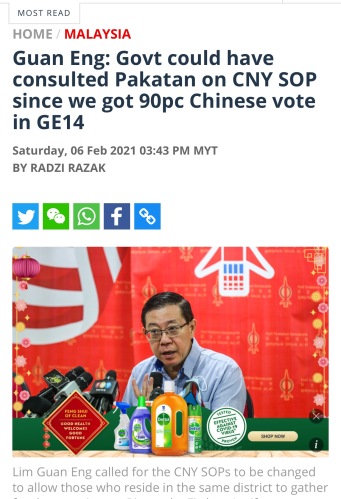 By the way, when is the Malaysian First new year?

To add another touch of surrealism to the spirit of the CNY celebration, a piece of trivia about Copenhagen’s Little Mermaid (below).

One thought on “SOP for CNY: Why Guan Eng so sibuk when he’s not Chinese”