Lim Kit Siang and some 111 Malaysiakini reader comments, mostly aligned with the DAP gloom-and-doom narrative, are blathering about a potential “failed state” scenario.

“Malaysia urgently needs strong and effective action against hate speech and hate crimes which, if unchecked, could plunge Malaysia into greater disunity and polarisation resulting in a failed state”.

According to Encyclopedia Britannica, a ‘failed state‘ is one where “citizens no longer believe that their government is legitimate”.

No wonder Kit Siang likes to raise the spectre of Malaysia becoming a ‘failed state’. 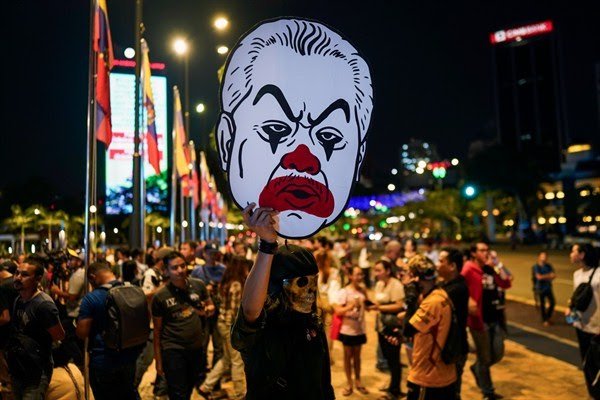 They’ve been endlessly questioning the legitimacy of Muhyiddin’s government ever since the Sheraton Move.

Hence “failed state” is one of Kit Siang’s signature terms to attack the establishment. Others are “global kleptocrat” and “kakistocracy”.

The DAP model of a successful state is neighbouring ‘meritocratic’ Singapore. A problem with that is Malays in Singapore are lagging behind the Chinese and Indians.

BELOW: Mahathir made The New York Times front page in June 1979 under the header “says Vietnamese trying to land will be shot”

“Malays didn’t particularly like the Chinese that they had”

According to Encyclopedia Britannica, a failed state is also one that “cannot project authority over its territory and peoples, and it cannot protect its national boundaries”.

In this regard, we must remember how security forces TUDM and TLDM have been protecting our boundaries from intrusion by Rohingya boats.

Yet there are those Malaysian virtue signalers who clap when Rohingya boat people manage to breach the integrity of our territorial waters.

As a historical reminder, please recall that on 15 June 1979, Mahathir threatened we would shoot any boat people from Vietnam trying to come ashore on Kelantan and Terengganu.

Robert H. Miller, the American ambassador to Malaysia in 1977, said: “They [the government] looked upon this tremendous, uncontrollable flow of refugees on their beaches as an uncontrollable influx of people of Chinese culture — many Vietnamese refugees were of Chinese origin”.

Melvin R. Chatman, a regional USAID refugee coordinator in the late 1970s, said: “… because they [Vietnamese boat people] looked so Chinese looking they really weren’t that welcome in Malaysia because the Malays didn’t particularly like the Chinese that they had”.

Muhyiddin should heed this precedent set by Mahathir and just ignore the NGO activists pressuring for us to be swamped by Rohingya in the name of human rights.

Note that it is only a failed state which allows interlopers to successfully violate its borders by failing to project sovereign authority over its land and sea.

BELOW: The New York Times front page in May 1978 reported on the Chinese fleeing Vietnam

America lost the Vietnam war when Saigon fell to the communists.

Allow me to make a guess – from reading The Malay Dilemma and his mindset – as to why Malaysia’s then DPM had so little sympathy for the approaching boat people that he was willing to order them shot on sight.

Aside from that they were Chinese ethnics, Mahathir probably disdained the transient human traffic as birds of passage.

A migratory flock. Flying away the moment it gets inconvenient to stay.

Evidently the Chinese minority in late 1970s Vietnam preferred flight to ‘fight’ … what for to stay and fight for the wellbeing of a temporary host country, duh.

And even though Vietnam lost a chunk of its ethnic ‘diversity’ some decades ago, the country is doing fine today.

BELOW: Boat people during the Vietnam migrant crisis

“Malaysia’s diversity must be regarded as an asset and not a liability – not just during the launching of national unity plans or blueprints but at all times so that Malaysia can benefit and leverage on our unique position as the confluence of diverse races, languages, religion, cultures and even civilisations”.

I disagree with Kit Siang’s claim that diversity is an asset to Malaysia.

On the contrary, diversity overkill – Malaysians have precious little in common with each other except for eating nasi lemak – is indeed a liability.

“All of these Chinese-culture people were coming across the beaches in some of the most traditionally Muslim Malay areas of Malaysia, thereby creating difficult and tense internal domestic political problems for the moderate Malaysian government.”

In fact, Mahathir’s idea to tow the Vietnamese refugee boats back out to sea had the backing of the Malays who objected to such Chinese cultural enrichment foisted on them.

BELOW: Far from hugging the flag, some here deliberately display Jalur Gemilang upside down

Why Trump is more patriotic than Kit Siang

Donald Trump has only wonderful things to say about his country while MAGA supporters proudly chant “U-S-A!  U-S-A!” at their public gatherings.

DAP politicians, on the other hand, rarely have anything good to say about our country while their party supporters still continue to sound a lot like how they sounded back in May 1969.

In his tirade yesterday against Muhyiddin, Kit Siang – for unknown reasons of his own – rubbished Trump and MAGA as well.

It’s too rich of Kit Siang to swipe at the former president, an American patriot who truly loves his country.

Find me a person who believes that DAP evangelical leaders and their fanboys have any genuine love for this country.

Judging from the remarks they make daily denigrating Malaysia, one has to wonder.

TWEET BELOW: Will saying disparaging things about Malaysia soon be considered ‘hate speech’ too? Be careful what you wish for, LKS

Will Muhyiddin support strong and effective action against hate speech and hate crimes which, if unchecked, would plunge Malaysia into greater disunity and polarisation resulting in a failed state https://t.co/lc57IQdA5p pic.twitter.com/vAeUKR7E6V

Kit Siang goes on to suggest that Muhyiddin’s National Unity blueprint “would be utterly meaningless” if we followed the polarization found today in the Divided States of America.

Let’s look at one facet of our own polarization — which is the Chinese-dominated private sector that puts out job ads requiring only “Mandarin speakers” need apply.

Then Haraoan Foreign Minister Saifuddin Abdullah tried to ameliorate this divisiveness by proposing to ratify the International Convention on the Elimination of Racial Discrimination.

Yet instead of throwing its full weight behind ICERD, the DAP chose instead to point a finger at Saifuddin saying the 2018 proposal was solely his brainchild and work.

And now with Muhyiddin’s blueprint, the DAP is again throwing buckets of ice cold water. Could it be because MCA had a hand in its drafting? (MCA vice president Ti Lian Ker is Deputy Minister of National Unity.)

The 60-page Muhyiddin blueprint was released on Feb 15, the morning after Valentine’s Day. It plans to create National Unity by making our rakyat patriotic and full of loving kindness.

Such a laudable objective is to be achieved through strengthening the unity ecosystem, quoting here the PM’s own policy terminology “mengukuhkan ekosistem perpaduan”.

Our Malaysian state has been trying to terraform the unity ecosystem for more than 50 years since 1969 — see evolution chart above.

But alas, the effort put in by all the various BN-PN iterations of lembaga/jabatan/kementerian perpaduan did not result in real progress being made.

Inserting himself, Kit Siang thinks he can do a better job. He once even challenged the entire BN cabinet on it.

Speaking in parliament on 18 March 2010, Kit Siang insinuated that if Badawi’s ministers failed to proclaim themselves “Malaysian first”, they can all be construed as lacking 1Malaysian DNA.

If Kit Siang is to have any credibility defining what being ‘Malaysian first’ means, he should similarly present us with a 60-page paper on the subject.

Simply accusing the ruling party personalities as “Malay first” does not cut it.

2 thoughts on “DAP Firsters want to teach Muhyiddin about patriotism”