In its Feb 23 editorial headlined ‘We’re not pendatang!’ the Sin Chew Daily said:

“The Chinese people are always citizens of this country.”

“Chinese migrants had been traveling between China and the Malay Peninsula and Borneo for business or engaging in agriculture, mining and road-building works, for almost six centuries from Ming dynasty to the 1950s. Few of these early migrants eventually returned to China, but a lot more settled and died here.”

Granted that the super sensitive Sin Chew felt slighted by the ‘pendatang’ label slapped on Malaysian Chinese, but still, its editorial passage above is simply a holey mess.

Let’s compare what Sin Chew is claiming to what has been written on ‘Chinese migration’ – see box, click to enlarge – by Professor Saw Swee Hock, an academic who has penned many books on the subject of demography.

BELOW: From his book titled ‘The Population of Malaysia’ published by ISEAS IN 2007, page 32

The Chinese from Ming dynasty era arriving in the Malay archipelago were – note this next operative word – “contacts”.

It’s not as if the forefathers of Malaysian Chinese (the bulk of Cina DAP) had actually emigrated here “almost six centuries” ago.

Prof. Saw said it was only after the British started ruling in the Malay states that effective Chinese immigration really began.

(Helen’s note: This is like what happened in Burma.)

Prof. Saw said a continuous inflow of Chinese into Malaya was kickstarted in the first half of the 19th century.

The table below on Chinese coming to and leaving Malaya in the period from 1881 to 1958 is collated by Prof. Saw and contained in a different edition of his book The Population of Peninsular Malaysia.

Sin Chew said: “Few of these early migrants eventually returned to China, but a lot more settled and died here.”

It was not a “few” of these Chinese workers that eventually returned to China: it was a whole lot of them. See the statistics. The real figures are all in the table above.

Malaya’s Chinese IMMIgration (people coming in) was most active in the 1920s and reached its peak in 1927. Note: Emigration is people going out.

Similarly a portion of our present day Bengali guest workers, after staying here a few years will pack their bags and return to their wives and children in Bangladesh. Others might marry local women and remain.

BELOW: Also from Prof. Saw’s book — incidentally, Bangla men are the second biggest group of Malaysia’s foreign-born population, after the Indonesians 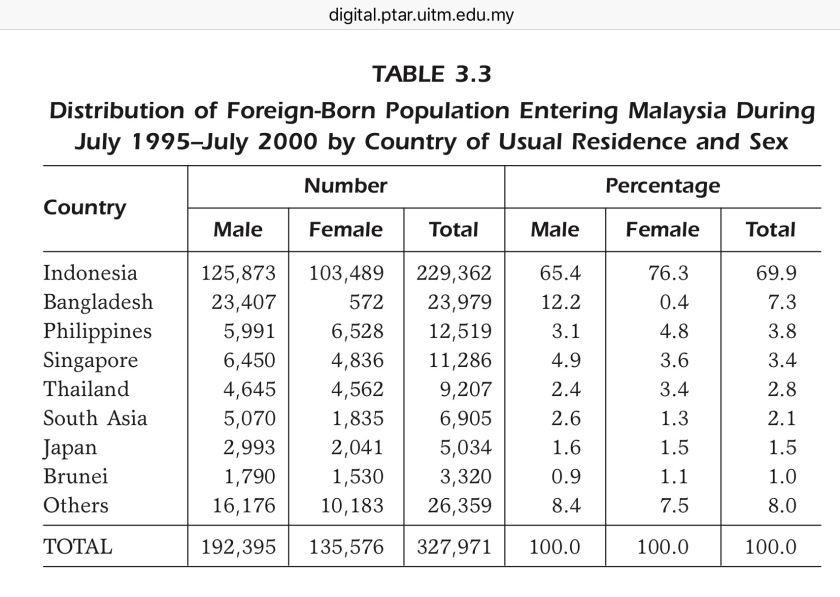 “Most of the first generation locally born Chinese here were born before the second world war. Like other ethnic communities here, they also suffered the rampage of the Japanese imperial army and communists, and fought alongside others for the country’s independence. They suffered not less than any others on this land, and very very few would ever think of ‘going back to China’ save to visit their relatives there.”

Yet more misleading framing of the narrative from Sin Chew. The paper claims that Chinese fought for Malayan independence.

The truth is closer to the fact that Chinese in Malaya fought the Japanese occupying force because China was at war with Japan.

Not that the Chinese fought to uphold the sultans or fought to free Malaya from the British so that the Malays can take over and rule the country.

In 1930, the volume of Chinese immigration into Malaya was still very high at 242,000 (figures rounded).

In 1931, however, Chinese immigration dropped precipitously to 79,000.

From 1931 to 1933, there were more Chinese who left Malaya than Chinese who came. This was opposite to the established pattern of previous years.

What was the catalyst for this reversal?

By February 1932, the Japanese had conquered Manchuria.

The huge outflow of Chinese from Malaya in the early 1930s is correlated to happenings in the motherland.

Chinese here were more invested in China affairs than they were in Malaya affairs.

Even in 1946 when the British offered non Malays a Malayan Union equal citizenship, the response from Chinese residents was lukewarm at best.

This led the British to rescind the Malayan Union in 1948, replacing it with Persekutuan Tanah Melayu which favoured Malays.

Our local Chinese were more oriented to China than they were to Malaya, thinking of themselves as sojourners who would eventually go home.

It was MCA founder Tan Cheng Lock who pushed the Chinese to become more Malaya-centric when the crunch came in 1957 and immigrants had to make a decision on their citizenship.

Tan Cheng Lock’s line of thinking was Baba Nyonya and not the Chinese mainstream.

It is untrue for Sin Chew to claim “The Chinese people are always citizens of this country” even if said in a nuanced rhetorical context.