In his exclusive interview yesterday with FMT, Umno deputy president Mohamad Hasan spoke about Malay and Islam as being the core of this country. See below.

He used the words ‘induk’, ‘keindukan’ and ‘keterangkuman’ as well as a metaphor of Malays in the role of mother hen (ethnic) sheltering under her wings the chicks (Chinese, Indians dan lain-lain) that she loves one and all.

Other nationalists have used the term ‘core nation’ (bangsa induk) to refer to the Malays together with their culture held up as budaya teras.

DAP, on the other hand, has been successful in portraying Malay nationalism as some kind of Ku Klux Klan type supremacy — Ketuanan Melayu.

In fact, the DAP propaganda (accusing BN of racism) has been so successful that MCA finally capitulated and this year opened its party membership for the first time to non Chinese.

Other race-based parties like Bersatu have also caved in to the DAP propaganda by taking members from those ethnics initially excluded by their party name.

Paul Yong Choo Kiong and Edmund Santhara Kumar, for example, have become associate members of Bersatu, a communal party that once styled itself for ‘Pribumi’ only.

The recent evolution of MCA and Bersatu into nominally multiracial parties is, in a way, a victory for DAP propaganda.

In another way though, it is a sign that the Race card played ever so relentlessly by DAP is a spent bullet.

DAP won the battle of branding its opponents as ‘racist’.

The evangelical party has succeeded in thoroughly convincing the Chinese electorate that the BN formula is racist.

Having already won the Race card game, the DAP is now thinking its Religion card can be the second winning hand.

Will DAP win the next battle of branding its opponents as ‘religious bigots’?

BELOW: In the DAP, its non-Chinese leaders such as Ramasamy et al still must have their names in Chinese script

Other religions in the Federation

DAP is the party that has the most number of Christian elected representives, i.e. MPs and Aduns.

DAP is the party of the Chinese and of the Christians.

According to the Malay nationalists, Chinese do not have the status of ‘core nation’ (bangsa induk) here in Nusantara because their race originates from outside the region.

According to Tok Mat in his FMT interview, however, Malays and Islam are ‘induk’.

Christianity and Islam both originate from outside the Nusantara region. Christianity comes from the Levant or Middle East while Islam comes from Arabia.

Islam – although coming from outside – is the religion of the Malays who are the core nation (bangsa induk).

Christianity – also coming from outside – is the religion of the evangelis Cina DAP who are the not core nation.

Nonetheless Christianity is the religion too of the Borneo natives who are similarly the core nation. One example of a native Christian is Jill Ireland binti Bill Lawrence. She is Melanau and belongs to the indigenous people of Sarawak.

Using the nationalist argument, Hinduism and Buddhism are the religions adhered to by Indians and Chinese who are not bangsa induk.

But what about Christianity which is embraced by the pribumi of Sabah and Sarawak, and by the Orang Asal in Semenanjung who are all Nusantara natives? 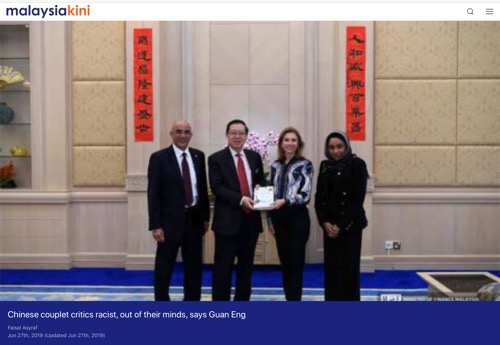 DAP’s push to diversify our national everything

When Lim Guan Eng was Finance Minister, the above – see pix – red Chinese couplets were pasted on the wall of his ministry.

The Finance Ministry under Guan Eng in 2018-2020 had issued their press statements in Chinese alongside our bahasa kebangsaan. As the finance minister, Guan Eng spoke to reporters in Mandarin alongside BM.

DAP as the voice of the Chinese electorate made no secret that they looked to the Singapore model of having several official languages, i.e. Chinese side by side with the tiny island state’s other national languages.

Malaysia however rejects Mandarin as a co-national language because its native speakers originated from a foreign country, China.

DAP can never make its etnik Cina to become bangsa induk despite all the lipstick they tried applying on the evangelis Cina DAP as “anak bangsa Malaysia”.

DAP politics is all about pushing multikulti … multiculturalism, multiracialism and for us Malaysians to be diverse, plural, multilingual and multi religious.

DAP as the Chinese embodiment has emerged as the biggest party in parliament with even more MPs than Umno.

Christianity has a status higher than Buddhism, Hinduism, Sikhism and other religions of the non Malays.

It is indisputable that DAP has won the race card game by convincing non Malays that they’re a marginalized and persecuted minority in Malaysia.

Can DAP win the Religion card game by convincing non Muslims that they’re a marginalized and persecuted minority when as bangsa induk Kristian they deserve better?