The girls, aged 13 and 15, carried a stun gun and tasered the 66-year-old food delivery driver (pix below). The teens have also been charged with armed carjacking.

The 15 year old climbed into the driver’s seat while the 13 year old got in the passenger seat of the Honda Accord belonging to the immigrant from Pakistan.

Mohammad Anwar then attempted to regain control of the car — which was his means of livelihood .

The younger girl reached over, started the ignition and  moved the gear causing the car to accelerate with Mohammad Anwar clinging on to the outside of the vehicle.

The car then sideswiped a metal barrier and light pole. This caused its open driver’s door to violently slam against the elderly man’s body.

The girls continued to speed off but quickly crashed a  short distance down the road, flipping the car on its side.

They were helped, seemingly uninjured, out of the overturned vehicle by national guardsmen — see pix below. (Note: Troops are still stationed in the American capital city following Biden’s barbed wire inauguration in January). 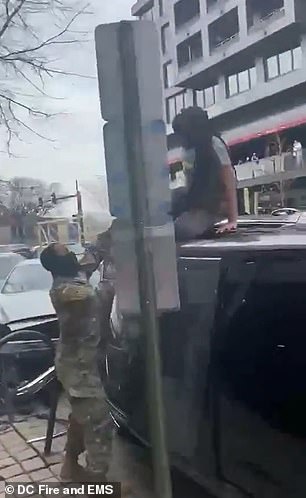 These criminal female juveniles were not bothered one whit about Mohammad Anwar who had been flung onto the sidewalk just before the crash, and was lying face down. He died in hospital from head trauma (and broken bones).

Instead one girl was heard screaming at the car wreckage – “Please, my phone is in there!” – before trying to run away.

"Please, my phone is in there!" – Teen After Killing Uber Eats Driver… https://t.co/Rr6VwSdatW

Predicting reliably from data and trends

Both girls are not named in the press because they’re minors.

Liberal American media, however, have deliberately withheld from identifying the girls’ ethnicity as well.

The fact that they’re black wouldn’t fit with the media’s victimhood agenda, now would it?

But if they were white teenagers, the woke media would have had a field day smearing them as “supremacists” … anyone recall the Covington kids and Nick Sandman, 16, who was named by big media?

Alternative media outlet Russia Today has called out the girls as black — see below.

RT also reported that ‘fake news’ CNN was outed by the public for downplaying the real criminality of the senseless episode.

Although the first reports that I’d glimpsed of this news item had consciously omitted to mention race, I could easily guess that the girls were black.

(On the other hand, I’d be completely surprised if I were to be told that the teenagers were Korean-Americans.)

And my hunch was soon confirmed by social media.

Previous incidents of perverse teenage crime in the USA had ‘mostly’ (meaning as far as I’m aware / that I’ve come across) involved black perpetrators.

Then there’s the actual data on black crime rate, especially for violent crimes like murder. Although only a minority ethnic in the USA, black men are nonetheless responsible for a disproportionate amount of the killings.

The botched carjacking above moreover happened in Washington DC where the population is 45.4 percent African American as opposed to 42.5 percent white.

It may be politically correct to pretend that race has absolutely no bearing on social trends but such wokeness does not serve us in making a useful analysis.

Following the data objectively to where it leads is more honest but this course of action does not allow the virtue signaling so beloved by the cancel culture mob.