Majlis Agama Islam Selangor (MAIS) has long been concerned about the “Christian agenda“.

MAIS believes the evangelical movement is even now surreptitiously hard at work.

In August 2011, the Selangor Islamic department had a run-in with the evangelists when a Damansara Utama Methodist Church thanksgiving dinner was raided by state religious authorities.

DUMC protested that its Dream Centre was searched by Jabatan Agama Islam Selangor (JAIS) without a warrant.

Evangelists are the premier league champions when it comes to playing victim. There is a term in football called ‘diving‘, i.e. pretending to fall as if tackled and feigning injury.

The always whinging ‘oh-lil-poor-me’ evangelistas get the gold trophy for diving.

On 30 Sept 2012, DUMC posted an entry in its Facebook – see screenshot above – asking Christians “How do we win our city for Jesus?”

Below is a photograph of Hannah the arch evangelist speaking at DUMC in the run-up to GE13.

Church starts in 45 minutes! Come and be blessed by our worship & a message by @hannahyeoh. See ya soon! #fb

DUMC has promoted other DAP politicians as well.

On 22 April 2013 (two weeks before the general election), DUMC invited Hannah back again, together with party colleagues Bee Yin and Rajiv Rishyakaran.

All three were soon to be successfully elected as YBs.

Subang is very possibly the most Christian constituency in Semenanjung while Subang Jaya has, arguably, the most number of churches in the country.

So you can say that Subang is the Jerusalem of Malaysia.

A ‘Kingdom Conference’ organized by Malaysians for Johor (M4J) planned for 26 May 2015 was canceled after the Islamic authorities were alerted.

No wonder then that Selangor and Johor both oppose the Christians using kalimah ‘Allah’ to name their God.

BELOW: Guan Eng is a born again Christian who loves cosplay as much as Hannah 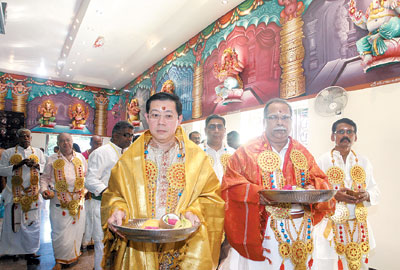 More so than race parties Umno and Bersatu, religion party PAS is hostile to the DAP.

PAS believes evangelists in the DAP are pushing the party’s direction.

It is a serious matter when Tuan Ibrahim, the PAS deputy president himself questions Steven Sim’s Christian motives with regard to establishing a “Kingdom of God”.

Steven (above) is the DAP member of parliament for Bukit Mertajam, Penang.

Guan Eng has denied that his MP is an evangelist, giving the excuse that “Steven does not do any preaching at any church”. (But then again, Guan Eng is your same politician who proclaimed “Saya bukan Cina”.)

PAS is savvy enough to judge the DAP based on the party’s actions and not only going by its camouflage words.

For example, the DAP vehemently declares that it is a multiracial and not a Chinese party. But look at the DAP’s actual behaviour.

Its chief target is the Chinese party MCA. And PAS can see what the DAP has done to MCA — annihilated it to the point that in the 2018 election, MCA gained only one seat in our Dewan Rakyat which houses 222 MPs.

Before the DAP’s hate propaganda among Chinese voters reduced MCA to a one-MP political party – now two MPs following the Tanjung Piai byelection – MCA had 31 MPs when Badawi won by a landslide in 2004.

Today the DAP is similarly protesting overmuch against being linked to evangelists.

PAS is aware of the nature of the beast in DAP because of their busted Pakatan Rakyat liaison. Bersatu too is aware of the DAP’s true nature following a toxic exposure in Pakatan Harapan.

Only clueless Umno – which has never before teamed up with the Christian-dominated party – lacks requisite awareness of the real DAP. But thank goodness there is the religious establishment to step into the breach.

Although the Malay parties may be disunited, the Islamic establishment remains a cohesive wall of defence. The ulama, at least, have an inkling of the extent of DAP’s destructive power.