They had 838 workers down with Covid, said the WRP Asia Pacific glove making factory in a press statement yesterday to Malaysiakini — see below.

These positives cases comprised almost 30 percent of the glove maker’s workforce in Sepang who were tested last weekend for the coronavirus.

According to the own numbers provided by the company, it works out to a nice round figure of exactly 2,000 workers who tested negative.

A fortnight ago on May 27, Health Ministry director-general Dr Noor Hisham Abdullah warned about the spread of Covid in factories.

The Health DG said that in the eight weeks prior, almost half of workplace clusters were recorded in the manufacturing sector.

He also alerted us about the increase in sub-clusters reported every week for the manufacturing industry.

On the same day (May 27), Dr Noor Hisham highlighted that while the clusters had decreased in other sectors following the start of MCO 3.0, the clusters in the manufacturing sector nonetheless still continued to increase despite the MCO’s implementation.

Problematic company even before pandemic

WRP Asia Pacific is not new to bad publicity. In early 2019, there were reports that they had failed to pay their workers for three months (see above).

The paper had to speak with three of the employees through the factory fence because they claimed not to be allowed to leave the WRP premises except on Sundays.

The Guardian further reported on 9 Dec 2018 about a “potential client” (who had personally visited the WRP factory) being shocked by what he described as some of the worst working conditions he’d ever seen.

An English-language Bangladeshi newspaper New Age reported on 13 Jan 2020 that they obtained reliable information revealing that half (49%) of WRP’s workforce hailed from Bangladesh.

The hiring of almost 1,200 of WRP’s migrant workers was moreover mired in irregularity, according to a Malaysiakini article published 12 Jan 2020.

The US Customs and Border Protection agency once blocked the import of WRP gloves on suspicion of using “forced labour” — see The Star Oct 2019 report above.

The company’s former CEO Datuk Lee Son Hong has been charged with criminal breach of trust and false claims involving some RM140 million.

His wife Datin Too Sooi Keng was also charged with abetting her husband in the CBT offences — see coverage below by financial paper The Edge on 24 Nov 2020.

While Chinese towkays make lucrative profits from cheap migrant labour, it is the Malaysian health care system that pays the price.

A quarter of the Covid cases in Malaysia recorded from February to May last year were foreigners.

This year, the Health Ministry has consistently raised the alarm that there soon may not be enough ICU beds to treat Covid. 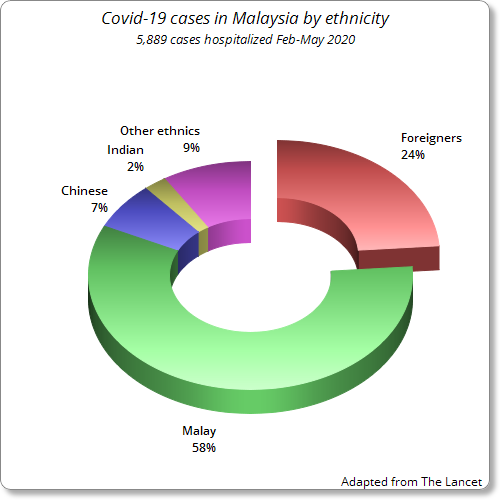