Myanmar junta leader Min Aung Hlaing told Phoenix TV – in his first ever foreign media appearance since the coup d’etat – that his country does not accept the term ‘Rohingya’.

Speaking on May 20 to China’s Hong Kong-based broadcaster, the senior general (see his conference call below) remarked in Burmese that the ‘Rohingya’ word only emerged post independence.

General Min pointed out that even the British colonizers did not categorize the immigrant group as ‘Rohingya’.

Thereafter in subsequent population censuses, Burma had similarly registered them as ‘Bengali’, ‘Pakistani’ or ‘Chittagong’ (Chittagonian), he added.

“But never the word ‘Rohingya’,” the general was quoted as saying in Reuters’ wire report, translating from the Chinese-language transcript of his television interview.

BELOW: Rohingya and the DAP’s bangsa Anak Malaysia use the same ‘Saya bukan Cina / Bengali’ strategy

So Guan Eng is not ‘Chinese’ either, huh?

The reason Burmese authorities had in the past sometimes described the Rohingya as belonging to the ‘Pakistani’ ethnic – remarked by General Min above – can be explained thus.

Bangladesh the modern republic was founded in 1971. Before that, the country was called East Pakistan.

Bangladeshi is the nationality of the citizens of Bangladesh. The people there are called Bengali.

The region of Bengal covers Bangladesh as well as West Bengal on its border. West Bengal is a state in India.

Bangladesh is ‘the Land of Bangla’ / Bengal.

NOTE: Readers who can speak the Indian language(s), please correct me if I’m wrong.

While it is true that British administrators wrestled with the kaleidoscope of ethnicities in Burma, they did not s… twitter.com/i/web/status/1…

The people of Rakhine reject Rohingya

Rohingya live in Myanmar’s Rakhine state which is next door to Bangladesh’s Chittagong district.

Rakhine was previously known as Arakan.

A few days ago on June 8, Arakan Liberation Party spokesman Lt-Col Khaing Kyaw Hlaing said, “Everyone knows the Bengali issue is sensitive in the country.

Rohingya are viewed almost unanimously as Bengali because they are descendants of workers from Chittagong who migrated en masse to neighbouring Arakan during British times.

The All Arakanese Solidarity Committee said in a statement that although any community certainly has the right to self identify by whatever name it chooses, nonetheless the choice of ’Rohingya’ is “intended to distort the history and identity of indigenous ethnic groups”.

AASC, which is a network of Rakhine civil society organizations, community leaders and politicians, rejects the (false) claim made by Rohingya of indigeneity.

Bengali are not native to Burma, and AASC considers their act of misleadingly calling themselves ‘Rohingya’ (or misappropriating an identity that does not belong to them) to be “a politically motivated move to seek international recognition and assistance”.

Both AASC and ALP are opposed to the Rohingya ever being given Burmese citizenship by Aung San Suu Kyi’s government-in-exile.

Like Senior General Min Aung Hlaing earlier made clear to Phoenix TV: “There are no Rohingya. It is just an imaginary name. It is not an officially recognized ethnicity. We don’t recognize it”.

Sokong seratus peratus the poster by our immigration department!

Sad that Jabatan Imigresen and its National Task Force have succumbed to pressure by preachy NGOs and preening virtue signalers into taking down their spot-on message.

Malaysia must stop caving to foreign bullies like Amnesty International who disingenuously invoke our consistent support for Palestinians.

3/ It is also particularly grotesque coming from leaders who will crow to the int' community about their concern for Palestinians one week, then in the next breath threaten violence against others who are traumatised and displaced. How does the Msia govt justify that hypocrisy?

The difference between Rohingya and Palestinians is the latter are not paying human traffickers to bring them here in the dead of night.

As usual, Malaysia is being accused of “xenophobia”. Hullo! It is not xenophobic to protect our territorial integrity.

Do the busybodies at Amnesty keep their front door locked or do they allow anybody to simply walk inside their house tanpa diundangi?

Amnesty also said it was “despicable” to tell the Rohingya that “they are not only unwanted in our country, but that we will use brute force against them”.

The last time some Boat People, i.e. ethnic Chinese fleeing Vietnam in the late 1970s, tried to land on our shores, Deputy Prime Minister Mahathir threatened that there would be a ‘shoot-on-sight’ order (see news headline below). 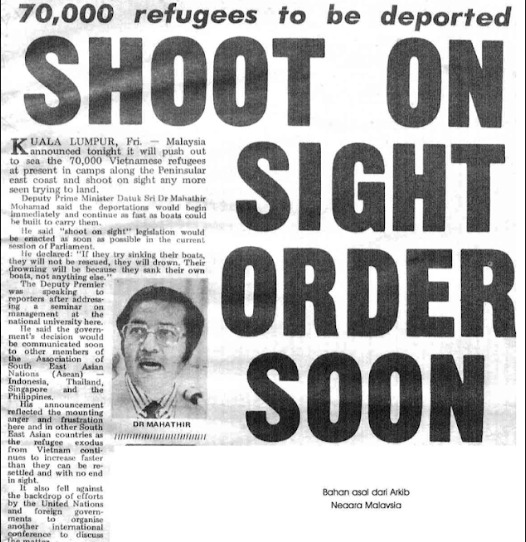 Rohingya travelling on people smuggler boats that sail from Cox’s Bazar are economic migrants. They have already found safety in the international refugee camps operated by Bangladesh.

They’re moreover not at risk of “ethnic cleansing” nor any physical harm by their kind Bangla kinfolk in Chittagong, where the camps are located.

As such, the Rohingya demand for asylum in Malaysia does not hold water and it is “grotesque” of the NGOs to accuse ordinary Malaysians of inhumanity and hatred.