You know what they say about being caught between the devil and the deep blue sea.

On the left of the Home Minister is the DAP preaching “kindness” to the Rohingya.

On his right is the legacy media convinced that it’s impossible for Rohingya to be repatriated.

BELOW: Locals are incessantly accused (by opposition politicians) of xenophobia against Rohingya

Is this news reporting or some kind of incitement against a persecuted class of migrants? Xenophobia at its worst. pic.twitter.com/gnO8QeFlHe

The New Straits Times in a ‘leader’ (voice of the paper) today said Rohingya are a “people who have had their relatives massacred and maimed”.

“One who is so traumatised is unlikely to agree to go back (to Myanmar) to a certain death”.

NST said: “Myanmar isn’t ready for the repatriation of the Rohingya. To send them back, even with consent, is akin to sending them back to be slaughtered.”

NST is referring to Bangladesh‘s stated intent to repatriate the Rohingya back to Rakhine.

Nonetheless, an unwanted Rohingya population is not only Bangladesh‘s problem alone.

Malaysia is one of the top five countries in the world hosting displaced Rohingya who have largely avoided seeking asylum in neighbouring Singapore, Thailand, Indonesia and the Philippines.

According to 2019 estimates, the following are the numbers of Rohingya in the countries below:

Rohingya have chosen to come to Malaysia because our welcoming DAP is the very milk of human kindness.

Regarding Bangladesh, however, the NST considers that the economic and social pressure caused by the presence of Rohingya are not adequate reasons for Dhaka “to send them back to certain death (in Myanmar)”.

“The Rohingya aren’t running away (from Rakhine) for a better life. They know what life in a refugee (Cox’s Bazar) camp is. The Rohingya are running to safety (in Bangladesh)”.

What the NST has not explained is why the Rohingya are running away from the safety of Cox’s Bazar to come to Langkawi. After all, NST has confidently asserted that “Rohingya aren’t running away for a better life”.

According to the NST, Myanmar is “an inhospitable land” because Buddhist monks “are vehemently opposed to the presence of the Rohingya” and the Burmese military “will never want the Rohingya to set foot in Myanmar again”.

On the other hand, we’re a most hospitable land because some Malaysians vehemently insist that this is “an immigrant country” … just like the USA, Australia and Singapore are countries build by pendatang. 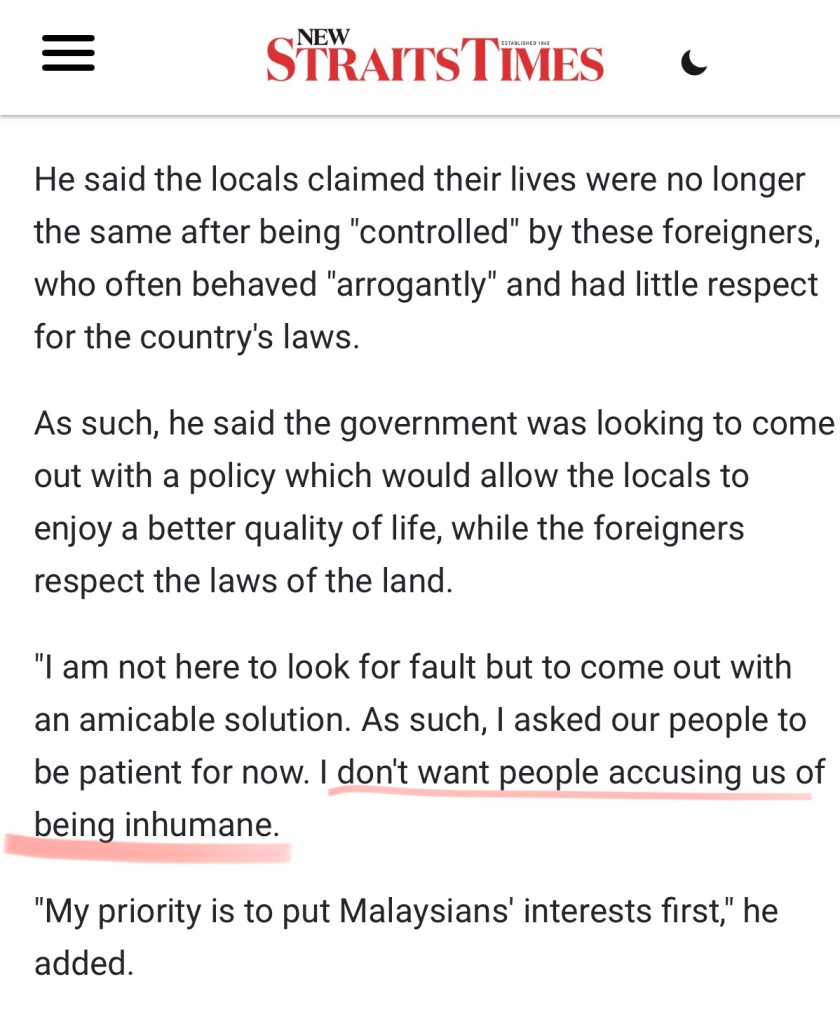 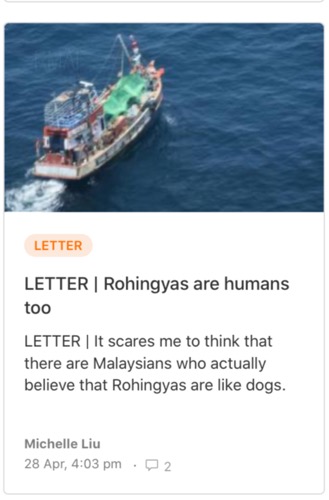 Only two days ago, NST had an article headlined ‘Hamzah to UNHCR: Where is your sincerity?’

Home Minister Hamzah Zainudin was quoted as saying – see NST screenshot above – the government was looking to come out with a policy which would make foreigners respect our laws while at the same time avert from people accusing the Muhyiddin administration of “being inhumane”.

— Penang police chief Abdul Rahim Hanafi said many of the victims were found with their throats slit (see photo below).

— Media and community groups in Penang have speculated that the murders were perpetrated by Rohingya. 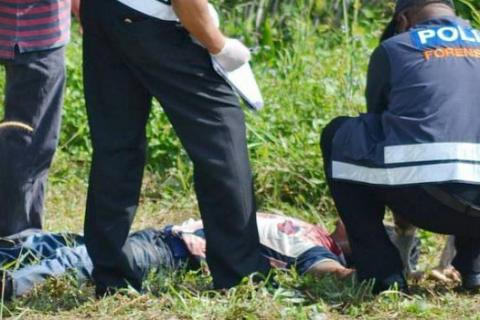 Meanwhile in the Bangsar Bubble …

Following the NST logic, the Rohingya already here cannot be repatriated. Two years ago, the Rohingya in Malaysia were estimated at 200,000.

It’s quite possible that the Rohingya have by now increased in number to a quarter million – documented UNHCR card carriers and undocumented economic migrants – in Semenanjung.

BELOW: Buddhist villagers persecuted by the Tatmadaw (Myanmar army)

For the record, Tatmadaw kill Buddhists too

Two days ago, the Burmese military was alleged to have set fire to a Buddhist village in central Myanmar, reducing 200 houses to piles of ash.

Some 800 people people from Kin Ma village in the Magwe region were left homeless from the blaze — see Al-Jazeera report above.

Elderly villagers too sick and frail to escape the fire were burned to death.