Is there anything that The Decepticons will not do?

They trigger the Chinese by exploiting community sentiments over pandemic-related tragic deaths and suicides.

They’ve been cynically manipulative of Chinese emotions through the ‘white flag’ hashtag. They prey on people’s misery for their political capital.

Now we get this expose from Sin Chew. 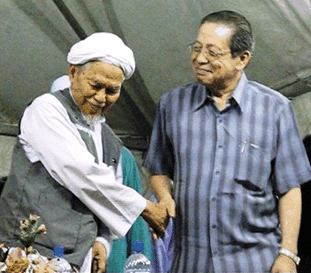 The editor-in-chief of the Chinese newspaper revealed in his column that the reform proposals broached by Muhyiddin four days ago were actually co-drafted by the DAP.

Kuik Cheng Kang, in his op-ed today, wrote that the cross-party cooperation framework offered on national TV by Muhyiddin was the outcome of secret talks between Tengku Zafrul and senior DAP leaders.

DAP playing footsie with the Bersatu chief nonetheless got (a kick in the behind) rejected by Anwar.

Harapan’s non take-up of the ‘Seven Reforms’ deal extended by Muhyiddin was one of the reasons ultimately pushing the PM to resign, said Kuik.

The Sinchew veteran also wrote: “In order to dilute its strong Chineseness stereotype, DAP has been working very hard these past few years in an attempt to win the support of the Malays.

“Nevertheless, after this incident, it will be even harder for the party to secure the trust of the Malays from this moment on,” Kuik added.

Joceline Tan wrote in her Aug 13 column in The Star that “DAP has a solid bloc of MPs but the party has become so toxic to the Malay base that Malay parties are wary of going near it”.