The belief by many Harapan supporters that they successfully formed the most multiracial coalition which Malaysia has ever seen is just plain wrong.

”After the 2018 general election (GE14), Mahathir had everything going for him — a stable majority, the most multiracial coalition the country has known, and with various agendas for reforms,” FMT yesterday reported Dennis Ignatius as saying.

Ignatius is a Christian evangelist Malaysian former diplomat who is launching his new ‘End of Hope‘ political book — cover pictured above.

All three GE14 details claimed by Ignatius, which were quoted in the FMT news report, are inaccurate.

Firstly, according to Ignatius, PM Mahathir 2.0 enjoyed “a stable majority” in the aftermath of the 2018 election.

Not true. Harapan ended polling night with 113 seats – see The Star‘s (table above) live coverage link here – which was only one seat above the simple majority threshold of 112 required in our 222-seat Dewan Rakyat.

Mahathir only managed to increase Harapan’s unstable majority by absorbing a lot of Umno frogs.

Clearly the Harapan government was never really “stable” and ultimately, had a shelf life lasting a mere 22 months. 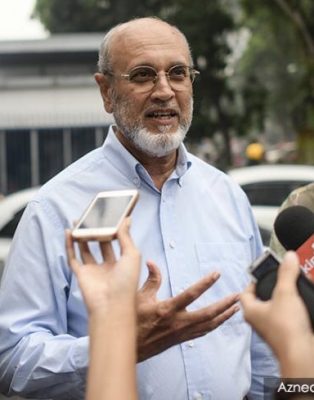 Secondly, according to Ignatius (pix above), Harapan – under the chairmanship of Mahathir 2.0 – had “the most multiracial coalition the country has known”.

BN in 2004 after the 11th general election had 84 non-Malay MPs. (Full headcount provided below.)

Thirdly, according to Ignatius, Harapan had “various agendas for reforms”.

Mahathir is blamed for his cavalier dismissal of the coalition’s Buku Jingga, saying “the manifesto is not a Bible” but nonetheless the Harapan core parties were themselves never serious about carrying out any substantive reform.

BELOW: Maria Chin Abdullah in her Bersih T-shirt pictured standing behind Hannah Yeoh before she was elected MP on the PKR ticket

Harapan’s early stable of 66  [correction 67]  non-Malay MPs is listed below – see bottom of page – and include two MPs elected as independents (who later joined PKR), the non-Malay PKR reps who have since defected to Bersatu as well as Chinese Muslim Maria Chin Abdullah.

Update: Tambat @ Jugah ak Muyang contested his Lubok Antu, Sarawak seat as an independent. He then hopped over to PKR. In 2020, he jumped to PN.

Meanwhile, the BN’s non-Malay MPs elected in 2004 include the non-Muslim bumiputera of Sabah and Sarawak.

BELOW: Chinese dissatisfaction and anger against the establishment trending in the mid-2010s

The one non-Muslim MP from Umno was Ronald Kiandee, a Sabahan.

2 thoughts on “Where do Nons get their (mistaken) idea Harapan was most ’multiracial’ govt ever?”