Some British Foreign Office papers were recently declassified that shed more light on the years 1965 – 1966 which saw more than half a million Indonesians massacred.

Under Suharto’s watch, the Indonesian army together with Islamists belonging to local Muslim militias carried out a bloody purge of the country’s communists.

Indonesian Chinese who leaned towards communism were also killed en masse and their businesses set on fire.

Americans knew about these killings as they were happening, the USA’s state government files declassified four years ago revealed.

Last Thursday, “the streets of Beirut turned into a warzone”, reported Voice of America (below).

▶️ The streets of Beirut turned into a warzone, Thursday, following protests by the militant group Hezbollah against last year’s port blast investigation.

This was when deadly sectarian fighting broke out after pro-Hezbollah demonstrators marched in a Christian neighbourhood of Beirut.

At least six people were killed and dozens injured in the exchange of gunfire between Lebanese Muslim and Christian militias.

Political observers fear that Lebanon is headed for another civil war — see below.

"We're in the midst of a ticking time bomb," one Lebanese citizen who lives in Ein Rummaneh and witnessed the confrontation told Newsweek. https://t.co/2ijXcBzYjt

The armed groups shooting at each other last week in Beirut are still the same ones as those involved in the first Lebanese civil war.

The war in Lebanon between Muslims and Christians lasted a decade-and-a-half (1975 – 1990) and was catalysed by the huge presence of troublemaking Palestinian refugees.

In Beirut on 13 Apr 1975, four Palestinian gunmen opened fire on Christians who were on their way to attend service at the Church of Notre Dame de la Deliverance. On 20 May 1975, PLO gunmen from the Tel Zaatar refugee camp murdered dozens of Christians in a clash. On 1 Sept 1975, Palestinian guerrillas raided the Christian village of Beit Mellat, killing many of its inhabitants and destroying most of the homes. (Source: ‘PLO Policy towards the Christian Community during the Civil War in Lebanon’, International Institute for Counter-Terrorism) 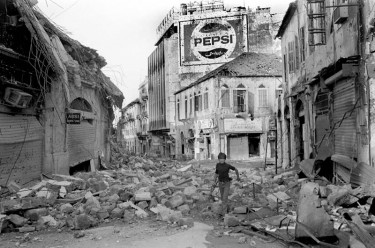 As noted earlier, the Lebanese civil war was sparked in 1975. Christians, an influential community in Lebanon (by law the Lebanese president should always be Christian), viewed the hundreds of thousand Palestinian refugees as a ‘Trojan Horse’.

Of all the countries in the world, Lebanon is closest to Malaysia in terms of the Muslim-to-non Muslim ratio in our respective populations.

Since the NUG declared a “people’s defensive war” in September, attacks on military-appointed administrators and military informants have reportedly prompted over 150 administrators in #Myanmar's Magway, Sagaing, and Yangon regions to resign.https://t.co/j5KZWfSF5Y

Another country said to be on the brink of a civil war is Myanmar.

Before the military coup this February, ethnic insurgencies involved minorities – such as the Christian Karen tribe – battling the Burmese military in the borderlands.

Since the arrest of Aung San Suu Kyi, however, the majority ethnic Bamar (note: ASSK is Bamar) in the Buddhist heartland are taking up arms against the Tatmadaw.

On their part, the coup generals are prepared to retaliate and strike hard. See Asia Times article two days ago — ‘Myanmar military prepares an onslaught for the ages’.

This is not the only thing our two countries have in common though.

PM #SheikhHasina today called the displaced #Rohingyas and stranded Pakistanis a burden for #Bangladesh, saying they are putting pressure on the country's economy. pic.twitter.com/7RdUqc6bML

Rohingya in Malaysia number some 200,000, according to Foreign Minister Saifuddin Abdullah in his briefing to members of parliament earlier this month.

Saifuddin has positioned himself as the champion of the Rohingya, and no doubt he will pontificate on their “human rights” at the upcoming Asean summit on Oct 26 to 28.

He is still virtue signaling when even Bangladesh has had enough of the Rohingya.

Rohingya are a burden for Bangladesh, and putting pressure on the country’s economy, Bangladesh newspaper The Daily Star reported its country’s prime minister Sheikh Hasina as saying on Sunday (Oct 17).

5 thoughts on “When will Saifuddin learn from Hasina?”