Mahathir said that the residents of Bukit Malut are not Rohingya but Kedah Malays.

One group of Malays are said to have merantau up north circa 1865, even reaching to as far as southern Burma.

Mahathir said these olden Malay travellers (seafarers) have lately returned from Myanmar to Bukit Malut, Langkawi — see his tweet below.

These Malays came back to Kedah after more than one hundred years being away from their homeland. They look like Melayu.

Using the same ‘blood’ (satu rumpun) logic, it is understandable why Bangladesh has allowed the Rohingya to return to Chittagong after more than a hundred years since their departure.

Blood is thicker than water. Some Kedah Malays feel a kinship with the Bukit Malut returnees.

Bangladesh too sees a kinship with the ‘Rohingya’ returnees, and have very generously absorbed more one million refugees who fled the violent army operations in Myanmar.

BELOW: The British invaded Burma in 1824 and imported masses of foreign workers 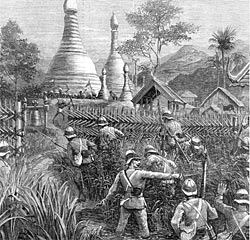 Mahathir views the Nons as descended from people of “foreign origin” whose forefathers obtained Malayan citizenship only around the time of Merdeka.

There is still a taint of “pendatang” and “asing” clinging to our country’s ethnic minorities.

The Burmese similarly see Rohingya as “immigrants” and “foreigners”, and call them “orang baru”.

If the Malays returning from Myanmar are considered to have abiding roots in Kedah, then the Rohingya escaping from Myanmar have also retained their distant roots in Chittagong (Bangladesh).