The tarik tauliah matter is a setback for PAS Islamists as Selangor moves to curb political activity in mosques this year.

Meanwhile, DAP-controlled Subang Jaya remains the evangelical capital of Malaysia and the party has a firm grip on non-bumiputera Christians.

Nonetheless in the race between the political Islam vs political Christianity of both parties, PAS is ahead of DAP in achievements.

BELOW: Former and current Subang Jaya Aduns — the two DAP Christians selfie themselves in their cosplay uniform 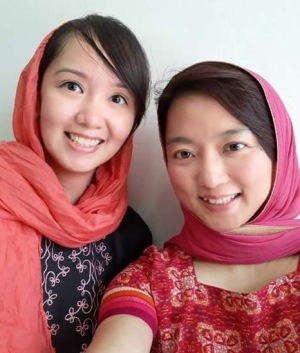 DAP occupied Putrajaya for a total of 654 days.

BELOW: The Sheraton Movers met in Mahathir’s house on Feb 23, the eve of his resignation

PAS has been in Putrajaya for a total of 672 days as of today.

Meaning, PAS – which entered Putrajaya in March two years ago – is now longer as the federal government by 18 days than the DAP through its 2018–2020 stint.

Huzzah! PAS has beaten DAP by a fortnight already.

BELOW: ‘Huzzah!’ is an exclamation of delight akin to “Jolly good”

Historically speaking, DAP and PAS had always/mostly remained in the opposition until way past the noughties decade (2000s).

DAP enjoyed its maiden taste of federal power in 2018, while the first and only other time PAS was a part of the central ruling coalition was under PM Tun Razak in the 1970s.

So even though DAP has 42 MPs compared to PAS’s 18 MPs, the political fortunes of the evangelist party have not been as good relative to the Islamist party. Huzzah!

Muhyiddin and Ismail Sabri have treated PAS with respect, and the latter given the Islamist party the cabinet Religious Affairs full portfolio (the Religion Minister and his Deputy Minister are both from PAS). Huzzah!

Mahathir on the other hand treated DAP and PKR as his junior partners and showed them no respect, hahaha.

BELOW: Look at Guan Eng, huhu … as
timid as a church mouse beside Atuk

Divided by more than Titiwangsa

Monsoon and flood are no strangers to Kelantan and Terengganu — two states to the east of the Titiwangsa mountain range.

Hence we’re more familiar with the PAS-ruled Malay heartland being lashed by rain and inundated by flood.

Last week however, it was the DAP belt along the peninsular coast west of Titiwangsa that was drowned in water.

We don’t usually hear much venting about the storms and floods in Kelantan.

In the Klang Valley instigated by the evangelists, they vented their fury at PM Ismail Sabri on Twitter — see tweet and nasty DAP poster below.

1️⃣ The Yang di-Pertuan Agong had to ‘teach’ Ismail Sabri that a post-mortem on the flood situation is needed
2️⃣ Cabinet Ministers are still ‘missing’ overseas, even after PM’s order to return pic.twitter.com/oHi0FwR3UB

The toxic Malaysian Twitterverse, as we well know, is full of angry mobs always finding fault and ranting at the establishment.

As I’ve also mentioned before, the Twitter timeline of @hannahyeoh is the most egregious in its nasty attacks on the Ismail Sabri administration over our recent flood.

Federal apparatuses are slammed by DAP for shortcomings in flood relief despite its own Harapan coalition ruling as the state government. (In GE14, Harapan won a whopping 51 out of the 56 Selangor DUN seats.)

Like Hannah, the other DAP Born Again Christians are equally nasty — have a look at Lim Guan Eng’s accusatory New Year message below.

Even as we’ve left 2021 behind and stepped into 2022, Guan Eng just can’t leave off his politics of hate against those he labels racists, religious extremists and corrupt.

Nonetheless, four fingers are pointing back at him and his party. Non-Chinese Malaysians have not forgotten that Guan Eng has his own corruption cases pending in court.

Religious extremism, racism and systemic corruption are the biggest threats towards national unity and integration between the rakyat of Peninsular Malaysia, Sabah and Sarawak that hinders balanced economic development and equitable economic growth.
(1/4) pic.twitter.com/kV6565wojD

Roughly three years-and-eight months have elapsed since Harapan’s success in changing the regime.

There are one-and-a-half years still to go (at the very max) before GE15. Unless an election is called anytime earlier, parliament will automatically dissolve on 16 July 2023.

What can we deduce from the 2018–2021 years when Malaysia Baru had three different PMs?

When DAP was inside Putrajaya, the Islamists were on the outside. Now that PAS is in Putrajaya, it is the evangelists who are pushed to the periphery.

And so thus far in the Islamist vs evangelist match, PAS is winning.

10 thoughts on “PAS Islamists have pulled ahead of DAP evangelists”