“Lebanon sits on the brink of a complete and catastrophic collapse,” says Prof. James Ker-Lindsay in a video commentary today.

The professor, who researches issues of conflict and secession, provides his review on the country’s bleak outlook for 2022 in the eleven-and-a-half minute YouTube below.

James Ker-Lindsay is a visiting professor at the London School of Economics as well as research associate at Oxford University’s Centre for International Studies.

Fearing Lebanon is on the verge of disaster, he points out that already “there are signs of growing tensions across society”.

In fact, violence in Beirut last October had even fuelled concerns of a return by the country to civil war.

Referring to Lebanon’s Muslim-Christian sectarian divide, Ker-Lindsay explains “it is this complex religious situation that forms the backdrop for the country’s problems”.

He tells viewers that according to the most recent data available, around 65 percent of Lebanon’s population is Muslim.

The most recent stats on Malaysia’s religious demography is not yet available but at last count, Malaysia is 66 percent Muslim.

As I have mentioned previously, Malaysia and Lebanon are the two countries in the world closest to each other in terms of our religious demographics.

Christians wield a strong political influence in both countries. 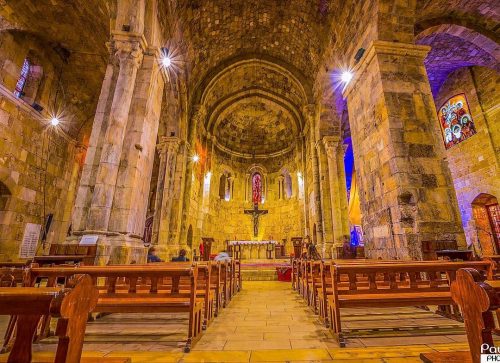 ABOVE: Historical church from the crusader era on Mount Lebanon, some 30km north of Beirut

Interestingly the professor also mentions that in the distant past, the Lebanese region was once a Christian crusading kingdom.

The crusader state of Tripoli (1102–1289 CE) was located in a part of what is today Lebanon and Syria.

Following the 1948 dispersal of the Palestinian diaspora as well as their expulsion from Jordan in the 1970s, Lebanon’s delicate religious balance was shifted by the influx of these refugees.

Its sheer numbers have moreover put “an intolerable strain” on the country, observes Ker-Lindsay.

Could there be possibly up to a quarter of a million Rohingya now living here?

Our government pegs the Rohingya figure at 200,000 – see news report (video above) – but this stats likely refer to estimates from a few years ago.

• ‘No racists or xenophobes in Subang Jaya’ — read HERE

2 thoughts on “‘So how did the country get into such a mess?’ — professor”