Thank you Tony Pua for helping MCA make a comeback by insulting Chinese voters as having no “moral fibre”. Hahahaha

More good news. As I had correctly forecast, Umno has wrested Pemanis from PKR. The seat was contested by Gerakan for BN last time.

And  MCA has prevailed over DAP in Bekok. Congrats BN.

(Unofficial) BN has won by a landslide as I predicted. We’re looking at more than 40 seats in the 56-seat Dewan.

BN has won the seats needed to form the Johor state government.

MCA has claimed victory in Paloh. My prediction – made in late February – that the DAP’s Malay incumbent Sheikh Umar would not be able to hold on to his seat is proved correct.

So far so good news: MCA has won Yong Peng (unofficial) and Umno is leading in Larkin and Pulai Sebatang while MIC is leading in Bukit Batu.

If confirmed, MCA would have snatched Yong Peng from DAP.

At 7.50pm, the Malaysiakini main headline said ‘Musa ahead in three seats’. A few minutes ago, the FMT headline (BM version) said BN was leading in 36 seats. 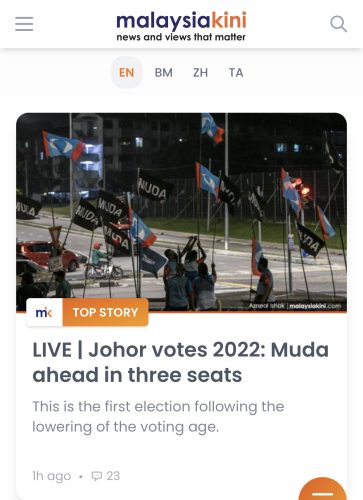 Voter turnout has been low, possibly a little over 50 percent. Will update once EC provides a settled figure. Update: Turnout was 54.9%

I’ll also be updating this page as results – particularly of the DAP incumbent seats – come in and check them against my earlier predictions.

Earlier today, I blogged on two topics relating to elections in general since 2008, i.e. over roughly the last decade-and-a-half which saw DAP growing from strength to strength.

• Topic #1 — the BULLYING by the DAP and its Red Guards

• Topic #2 — the GASLIGHTING by the DAP and its spin doctors

Lest we forget, DAP reached their zenith by being smear merchants fomenting a culture of grievance.

BELOW: The DAP’s four Old Horsemen

My first preliminary observation is that DAP gave false hope to its faithful followers by telling them that Muda can bring about positive change. I don’t think so.

From the scant news that has trickled out so far, the Undi18 debut was lacklustre.