“DAP is still facing problem being unable to change the perception of the Malay society which sees it as anti-Malay and anti-Islam,” said a Sinchew editorial on Tuesday (March 22).

Editors of the influential Chinese newspaper were giving their take on future prospects – if any – of DAP’s 2022 CEC to chart a different course.

Let’s parse the Chinese scenario pertaining to how Sinchew is framing it.

1. DAP still has a problem

2. Its problem is Malay perception of DAP as being anti Malay and anti Islam.

3. The problem remains a problem because DAP is unable to change how Malays ‘perceive’ the party.

I think Sinchew is part of the problem.

The paper is in denial. Whereas Sinchew has framed it as merely an issue of ‘perception’, no amount of tudung wrapping can help obscure reality.

Blame Umno for perception by Malays

The paper tacitly acknowledges that Malay public opinion views DAP negatively. But the undertone in Sinchew remains that the Malay community is perceiving DAP quite wrongly.

Many Chinese will accuse the feeble Malay mind of being poisoned (brainwashed / indoctrinated / programmed) by Umno or government agencies like BTN to be racist and bigoted.

While many have come out to condemn Zawawi's remarks, PM Muhyiddin Yassin and Perikatan Nasional have maintained perfect silence on the matter. Do they condone this hate speech against Christianity?

Kiasu people just don’t like to be accountable for the situation (‘perception’ quagmire) they find themselves in, and prefer to shift the blame to the Malay establishment and Muslim structures instead.

The next step for the Chinese then is to hold BN responsible for how Malays feel about DAP, on account of the coalition having been in power the last 60-odd years. 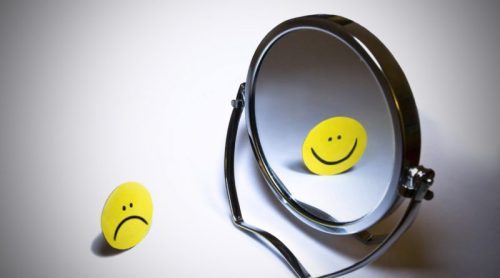 Rather than disputing perceptions, we can always count. Numbers are tangible.

Only one Malay – Young Syefura Othman – made the cut, and she is a woman.

Last Sunday’s party election was the first time DAP instituted a 30 percent quota favouring female CEC reps, and Syefura would have benefitted. Not a single Malay man was elected into the CEC.

Do these statistics refute or validate the popular perception of DAP as anti Malay?

I said earlier I think Sinchew is part of the problem and not providing a solution. Allow me to explain.

Among these opinion shapers (shaping the Chinese mind) through their published opinion pieces are Mariam Mokhtar, Rais Hussin, Mohsin Abdullah and Tajuddin Rasdi.

I will comment on Tajuddin whom I view to be an apologist for DAP Christians.

Meaning, his mind is so open that his brains fall out. pic.twitter.com/0hpcqXD8wf

My criticism of Tajuddin and of Sinchew is this — the paper’s Malay columnist is singing to the Chinese choir.

For example, Tajuddin’s March 21 column had 31,678 page views in the Sinchew portal.

What narrative is Tajuddin sharing through his loudhailer? Are his views representative of the Malay community? The answer is ‘No’.

Five days ago, Tajuddin penned an ode to Kit Siang as well as recounted his personal experience as a DAP member (2014–2018).

Tajuddin wrote: “As I possess a wider view, perspective and understanding of Islam than 98% of Malays in this country, my position on people, deeds and thoughts are much different than most of those who profess the same religion”.

By his own admission above, Tajuddin belongs to the two percent Malays whose thinking differs from the more orthodox 98 percent of the community.

Tajuddin‘s readers in Sinchew will surely not get from him an understanding of why the polity persists in ‘perceiving’ DAP as anti Malay and anti Islam. 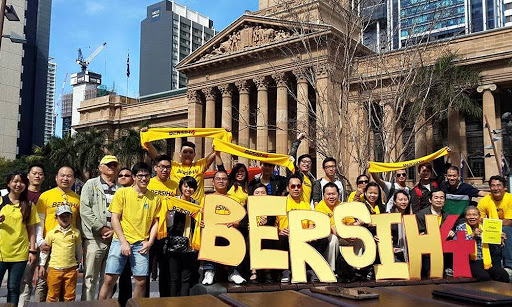 Cina DAP are convinced that their political Christianity icons are clean while Malay Muslim leaders like Najib and (in their ‘perception’) Hadi are dirty and corrupt.

Forward a year (eleven months), and I’m taking up the topic of DAP Christian politicians with him again.

Christians were among the top CEC finishers in the DAP election last Sunday.

Hannah Yeoh was placed 5th in the standings behind fellow Christians Chow Kon Yeow and Teresa Kok who were in the 2nd and 4th spots respectively. 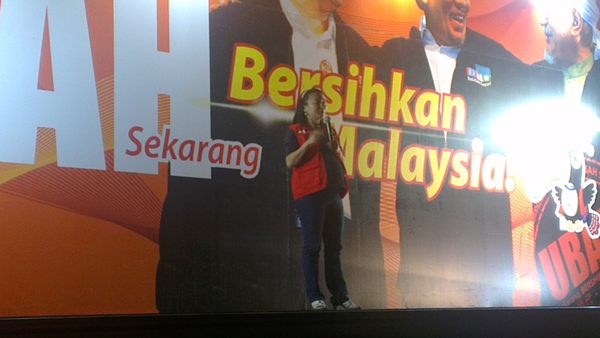 Born Again Christian Lim Guan Eng, however, this time slipped to 8th place. Nonetheless, they’re a lot of Christians in the top rungs of the CEC.

Moreover if prominent MPs like Yeo Bee Yin and Ong Kian Ming had succeeded in their bids, the CEC would have even more Christians.

The newly installed head of DAP Youth, Kelvin Yii, is another Christian.

Their equally self-righteous Jerusubang base also act as if they’re the only “morally upright” people in our country, for example, thumping their chest proclaiming (see below) ‘Kit Siang does not need a RM100m mansion’. 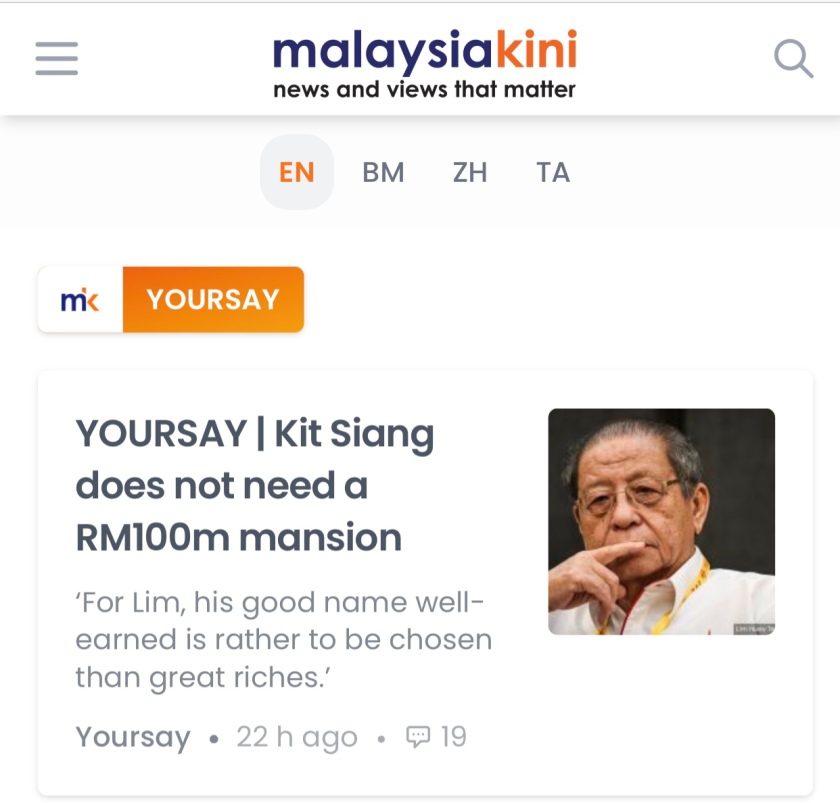 Mahathir too preferred the DAP Christians as ministers in the Harapan administration.

Dapsters exalt those Cina DAP handpicked by Mahathir to fill his 2018 cabinet as “world class” in calibre. They are contemptuous of DAP oldies like Ronnie as “low class”.

How low class is our Prime Minister? https://t.co/k87ZS0vYST

Such a low class statement. Why not ask his own Ministers – those he urged to cancel leave and return home from overseas? https://t.co/0uAdQRUKhv

The DAP mobilized voter anger against 1MDB and are hoping to repeat their successful formula by conjuring up the spectre of 2MDB.

“… the thieves, supported by a largely semiliterate population, are poised to return with a vengeance,” says the Malaysiakini’s vox populi standfirst and headline on March 15 — ‘With Umno back in power, expect 2MDB next’.

Najib supporters are characterized by them as “a largely semiliterate population” or just plain stupid. They – evangelists, Bangsa Malaysians – are far more proactive/provocative than any Cina DAP. Recall that the churches and Christian NGOs had mobilized for Bersih.

With the DAP increasingly dominated by Christians, the party’s anti-Islam image can only harden. Tajuddin Rasdi and Sinchew are not telling the Chinese this.