On paper, Padang Serai is a safe seat for PH. Nonetheless, I reckon the recent public backlash against PH, and against its new squeeze BN, will be strong enough to unseat this unholy PH-BN matrimony.

BELOW: The famous Japanese wave painting just needs a bit of green touch-up to reflect our local colour 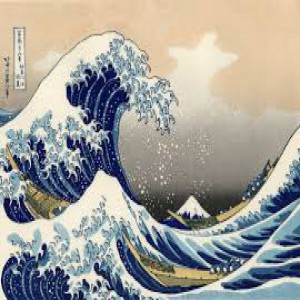 This morning, I blogged that the Padang Serai election is a referendum on BN chairman Zahid Hamidi. It is also a referendum on the Harapan multiracial parties PKR and DAP.

The Merbau Pulas electorate is three-quarters Malay and have leaned PAS since 2008.

The Lunas electorate is mixed, with a little less than one-quarter Indian voters — which is a lot of Indians who are otherwise a small ethnic minority scattered across other areas of our country.

Voter turnout in Padang Serai was 63 percent as at 4pm, according to the election commission.

Padang Serai has close to 133,000 voters. The Malay voter sentiment is easier to read.

But how do Indian voters feel about the fallout from GE15?

My guess is they’re pissed at PH for taking their long-standing support for granted, and treating the Indian reps which they (Harapan Indians) have chosen as being quite dispensable.

On an opposite note, since the MIC candidate in Padang Serai has stood down, where will the votes of BN Indians now go: To PH or to PN?

Actually their Faustian pact has DAP working with only Umno and not BN, as MCA and MIC have been sidelined by Zahid’s backroom bargain.

Since the BN chairman has indulged in the most disingenuous dirty dealings (‘Vote MIC/MCA, get DAP’), what do Indians have to gain anymore by voting BN? Answer: Nothing.

Padang Serai provides an opportunity for the BN’s erstwhile loyal Indian supporters to teach the betrayers a lesson.

The old DAP’s raison d’etre is to abolish the distinction between bumiputera and non bumiputera. This cherished aspiration is enshrined in the DAP’s founding document — the Setapak Declaration.

For decades DAP called MCA “running dog” because ‘what Umno say, the slavish BN Chinese party will do’, konon.

But post-GE15, both the DAP and Umno ecosystems received an unexpected shock.

So how do Cina DAP and Cina MCA feel about this latest development? As I’ve said, Padang Serai is a referendum for the voices of Malay, Chinese and Indian voters to be heard.

They can make themselves heard by either abstaining or casting a protest vote for PN which is what I forecast will happen.

The polling centres close at 6pm. Let’s see what comes next.