Umno will remain the strongest party. DAP will be No.2 in terms of seats.

MCA will be wiped out leaving a rump BN. This outcome will set us to collide especially if the Christians maintain their current agitation on  ‘Allah’.

Suddenly and out of the blue, The Star ran back-to-back articles deploring the political chasm between supporters of the two coalitions.

“Politics in Malaysia is getting to be very black and white. Some Malaysians see the party they support as the absolute angel and the party they oppose as the ultimate devil.

“Diehards worship their party leaders as if they were a tokong […] And the diehards have a holier-than-thou attitude as if their party and leaders can do no wrong.” 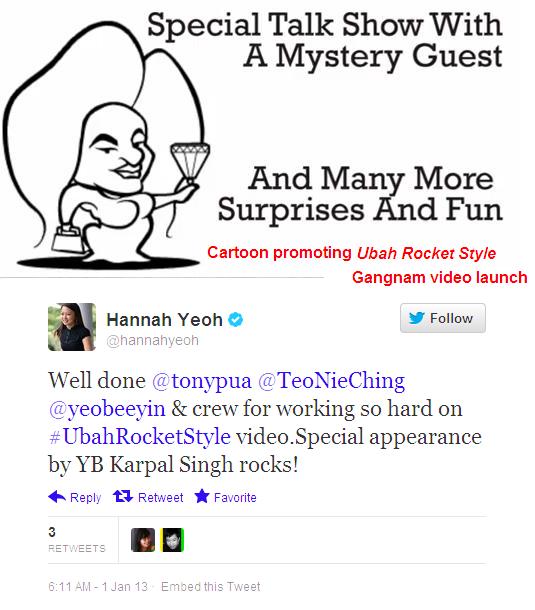 I’ve excerpted a few of his observations in bullet point below; Datuk Seri Wong wrote the following:

Do read Raja Petra in the screenshot below. 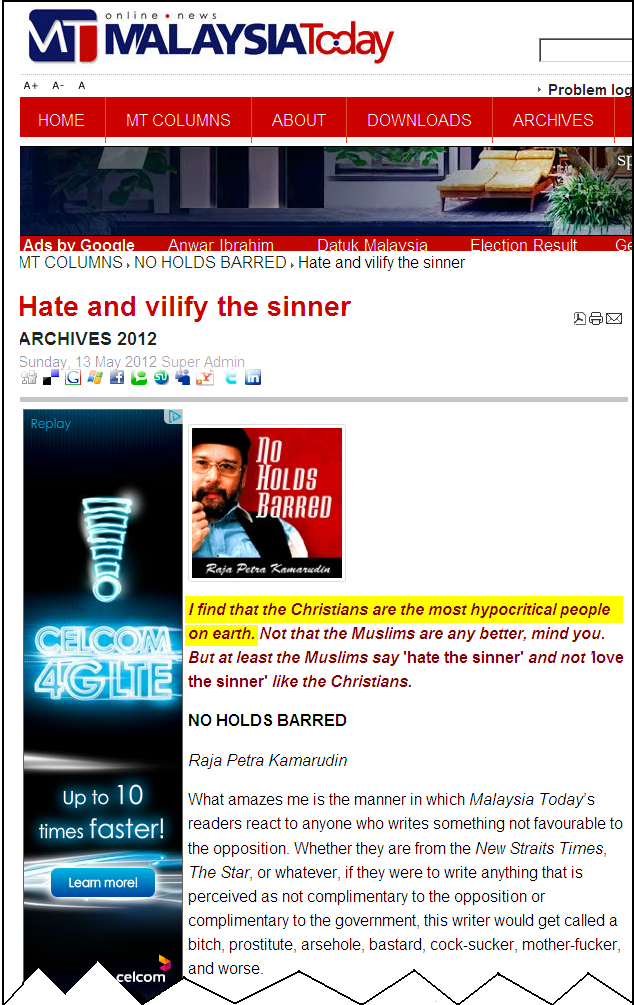 I’ve no quarrel with the above “black and white” dichotomy painted by both Chun Wai and Philip Golingai.

It is, however, the sentence below – where the Datuk Seri refers to Dr Chua Soi Lek’s tiff with pro-Umno bloggers – that is of interest to this blog.

And here is where our views diverge. 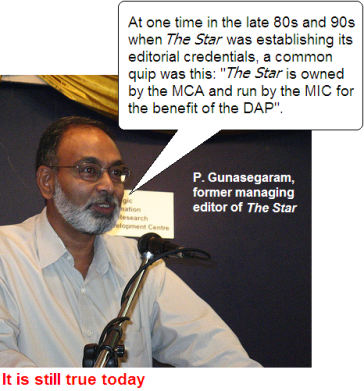 The Star top boss is trying to impress upon his paper’s readers that “the other [BN] component member parties are equally important” in the scheme of things.

Nope, they’re not. They vary in the degree of popularity and mass support. Chun Wai is fooling nobody to claim that all are equally important.

The truth of the matter is that the satellite parties – MCA, MIC, Gerakan, PPP and the rest of the peninsula components – are no longer major cogs in the BN wheel although Taib Mahmud’s PBB remains in gear.

Umno’s machinery – yup, those bloggers – have been working hard on the ground. The MCA, on the other hand, have been making themselves about as relevant as a dinosaur herd post-Ice Age by their misplaced dependence on The Star alone.

MCA’s expected and most inevitable demise must – in part at least – be laid at their paper’s door.

When Star journalist Philip Golingai talks about the Tokongs and their infallibility (maksum) in the eyes of their flock, he mustn’t conveniently ignore the fact that his own paper has been largely responsible for putting these DAP 2.0 evangelistas on a pedestal.

It is The Star that has vigorously promoted the said idolatry. 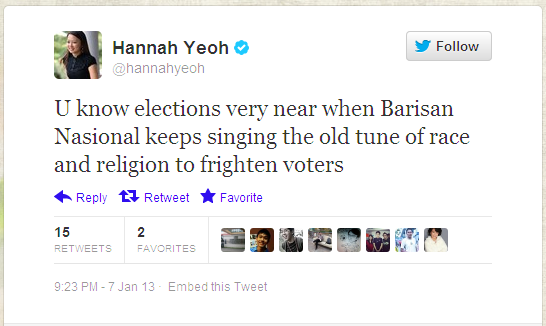 It is The Star that stamped its seal of approval on the Malaysian First product pitch. “Malaysian First” as conceptualized (i.e. making ‘Race’ out to be a pariah word) by its Firster adherents is an anathema to the BN communal formula.

It is the tacit backing from the paper’s massive machinery of thousands of editorial staff nationwide commanding a 5.63 million national audience that led the Dapsters to become cocky and arrogant thinking they’re God’s gift.

Just like how their DAP 2.0 evangelist leaders got cocky and arrogant thinking they’ve clinched Malay grassroots support via the PAS vehicle and given free access to enter mosques.

And now Chun Wai wants to wring his hands at the behaviour of the Red Guards who are terrorizing cyberspace.

May I remind him that for five straight years since the political tsunami of March 2008, his paper has done precious little to highlight nor counter the cybertrooper rampage which is vicious to dissenters and non-conformists. Even the MCA’s own Beliawanis treasurer lamented “@hannahyeoh = DAP SuperCyber Bully” (see screenshot below) to no avail.

So – and this is important – whose side did The Star take? I hope the MCA middle-ranking politicians will reflect honestly on the query.

At the end of the day, it had been the BN’s own Chinese people, especially Wanita MCA (think Tan Cheng Liang) and Beliawanis (Jessie Ooi), who have been at the receiving end of the Dapster viciousness and The Star vacuousness. 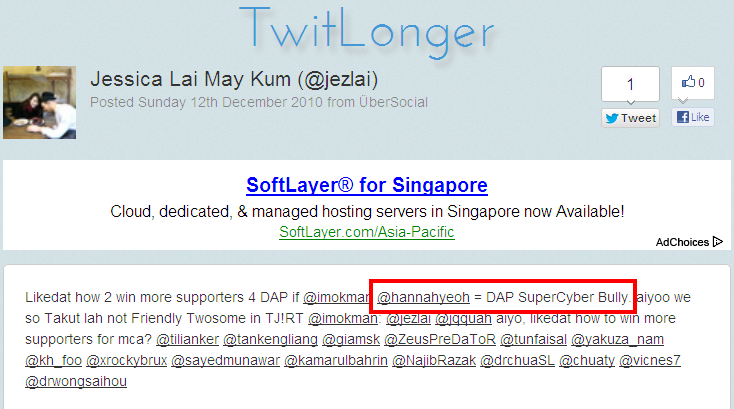 Five years MCA stuck in a rut … why?!

When Chun Wai chooses presently to say that “there’s no middle ground or readiness for reasoning” … well, the ability to reason (politically) has to be nurtured. Has The Star done that, i.e. foster a politically discerning readership the last five years?

If it had, MCA would not be in the doldrums that it is in today. On the contrary, MCA might even have managed a clawback from the mauling it received in 308. But the opportunity is missed and gone.

Obviously The Star didn’t try to raise the level of public political discourse since Chun Wai is now lamenting, “It’s incredible how gullible some Malaysians can be”.

And MCA has suffered most from this general lack of political discernment. It is the MCA that those incredibly gullible Malaysians think the very worst of. Among all the BN parties, it is MCA that is bearing the brunt of the public insults while The Star shrugs and turns its gaze to Jerusubang.

At this blog, we’ve been monitoring some of the stories that The Star has either missed or deliberately buried.

The paper employs 27 reporters on its Metro Desk mostly on the Subang Jaya beat. We’ve seen the quality of their output, haven’t we?

Too little too late

For all The Star‘s own “political bias” and “prejudices” that went into the paper’s fawning coverage of evangelistas, its owners the MCA will soon be paying the price. You can bet on it.

One can’t simply undo overnight the five years’ steady flow of evangelista indoctrination. Not especially when the proffered antidote takes the form of Star headline such as ‘Muhyiddin: DAP a racist party‘.

The last stretch of 15 weeks before polling day – whatever The Star starts doing now – will be unable to mitigate much for the bad faith and scorn poured on the BN all this while by the English-reading urbanites (and the Chinese-reading electors).

Chua Soi Lek thought that his mainstream media machinery with its 5.63 million audience would be able to put the Hate genie back into the bottle once the GE campaign period kicks off.

So much so that he was confident enough to scold and to slight the pro-Umno bloggers whose help he feels his party does not need. He seems to have overlooked how many MCA seats are located in Malay majority areas.

Clash of the titans

All the nauseous pandering by The Star may have gained the media conglomerate healthy profits but certainly not garnered MCA any Christian votes. Its media empire adopting this course of action has conversely cost MCA a hefty loss of support among Malay voters.

Some Umno quarters are already projecting a worst case scenario, which is that the MCA will be totally washed away — suffering an electoral performance worse than its 1969 fall. This time the party may not be able to recover as after all, the current president had even implied that his immediate predecessor might jump ship (like Jimmy Chua Jui Meng amply demonstrated).

Hence the rest of the BN will surely be planning their upcoming electoral campaigns keeping at the back of their mind the possibility of a Star sabotage.

BN minus MCA is not spirit of Alliance

Another task is re-mapping the anticipated post-GE landscape sans the BN Chinese component. How can MCA tenably represent the Chinese community if it obtains a mandate from only 10 percent of the Chinese electorate?

Thus the general election battle must necessarily be between Umno and DAP because MCA is decidedly dead in the water.

An autopsy will reveal a thousand tiny little Scissors cuts in the MCA back. 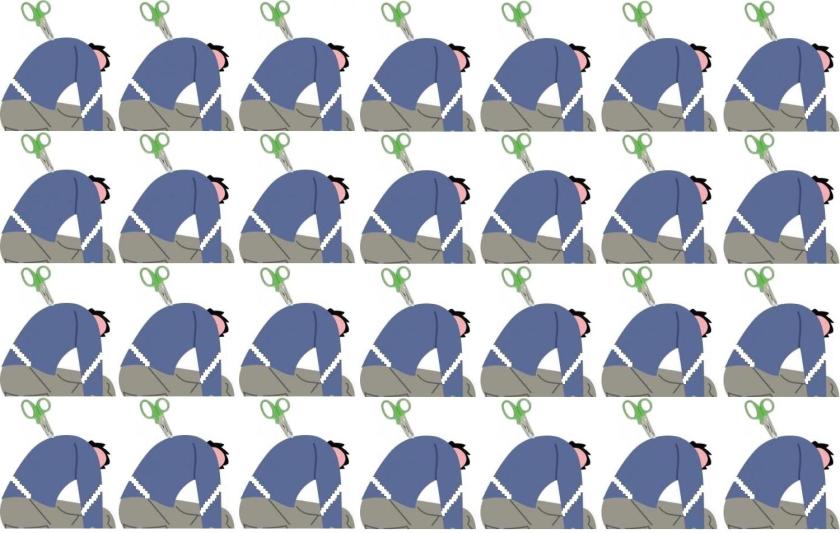