The MH370 episode is very revealing of the behaviour of the DAP and their supporters.

We can see how they are bullying the establishment whether it’s the DCA, TUDM, PDRM, MAS, ministers, Utusan or government supporters in the social media.

DAP has 38 MPs but the party is so loud and their supporters so very aggressive.

Umno has 88 MPs but you wouldn’t have guessed from the party’s paling tidak apa-ness.

Actually, we should be thankful that Umno is not acting its size.

The DAP, on the other hand, is behaving bigger than it really is.

What happens when the Chinese have a little power?

The dog in the photo below is captive.

It can’t run away because it is tied to a chain. You can see the chain.

The scene is in Sichuan. The men in uniform are Chinese. 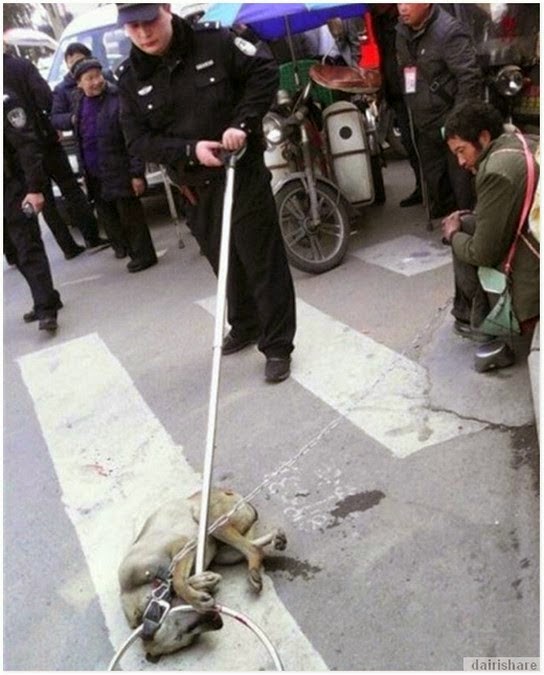 Now look at the second enforcement officer — not the one holding the shovel but the other one.

BELOW: You can see his right foot is stepping on the chain to make doubly sure that the dog can’t escape.

What the scene shows is the brutal execution of raw power.

The dog is wearing a collar and the chain functions as a leash. It ‘belongs’ to the vagrant.

The homeless man is powerless and helpless in the face of the Chinese officials who are wielding power and shovel and ‘pitchfork’.

Nobody among the Chinese bystanders intervened. Instead some of them were grinning as they watched the dog being beaten to death.

They are the kind of prosperous people – the two men in uniform are well-fed – who have no qualms about misusing whatever petty power that they might have. In this case, for criminally abusing a small creature.

Power in their hands is applied to hurt the weak and the poor. Sad for the dog and even more sad for the helpless inertia suffered by the vagrant.

What is it about the Chinese that they can just stand by and look on while all of that was happening?

I hope this dog tableau explains to you why a segment of the Chinese community here – who are non-Christian and non-DAP members – are not doing anything about the aggressive evangelist party’s rise and rise to the pinnacle of power.

The MCA vice president (current) Ms Chew had previously resigned her positions as Wanita MCA chief, Deputy Minister and Senator in protest against Chua Soi Lek and his sex scandal.

Her resignation was a principled act  rare among Malaysian politicians.

She is a good Buddhist.

But do you know what her political opponents did to her? 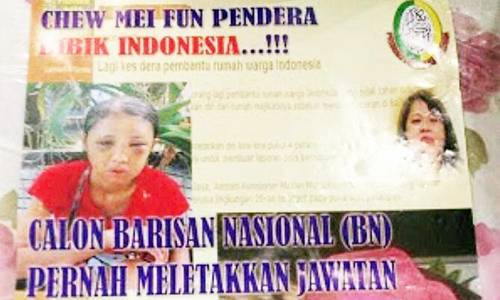 The kind of slander that “they” (pemfitnah tegar) are capable of concocting defies all human decency.

Chew Mei Fun has lodged a police report against (unknown) “opposition supporters” whom she said were responsible for the smear campaign, and saying, “These fictional lies have overstepped the boundary“.

Chew, who is single, has never even employed a maid before. It just goes to show that the audacity of their fabrication is beyond our imagination. What kind of dajjal are they?

They drag nobility down to their own scumbag standards and then have the cheek to point fingers at BN people as “low class” and “wicked”.

Chew Mei Fun rightly complained that “the opposition should not resort to gutter politics to tarnish [her] reputation”.

She said: “They put up banners telling people that by voting me is to vote for Umno and Perkasa. They want Chinese to hate MCA but when they go to Malay areas, they will tell Malays to vote for a Malay candidate”.

Brilliant. These supposedly colour blind people who have purportedly transcended race were telling Kajang Malay voters to vote for a fellow Malay Wan Azizah while at the same time lecturing that the BN is racist.

Before that, the Christian Elizabeth Wong had labelled Chew to be a person of “zero integrity” and “no morality”.

Their willingness to dehumanize whoever stands in the way of Pakatan’s political ambition is like the inhumane behaviour shown by the China Chinese who battered the dog to death in full view of its owner.

To say that the defamation they did Chew Mei Fun is vile and vicious would be an understatement. Aside from the vileness and viciousness of their libel is the slickness of the slander … teramat licik — the angle of attack that they used.

It is for this reason that they are very dangerous people.