If correct that it is her FB, then the use of Biblical name of ‘Hannah’ conjoined with a truncated surname ‘Ram’ (borrowed from a fragment of hubby’s name) has effaced the overt or discernible Chinese identity of YB Jerusubang that is associated with her birth name ‘Yeoh Tseow Suan’.

DAP led by cabal of evangelistas

As I’ve been repeating often enough, the DAP is an evangelical party or at least controlled by evangelistas at the top echelon. It is the Malaysian Chinese Association (MCA) that is the ‘parti Cina’.

Although membership of the DAP is similarly Cina kaw-kaw, nonetheless post-2008, this party has been UBAH-ed by evangelistas, who in turn have coloured the DAP’s political approach and social activism outlook in their own Christian image. 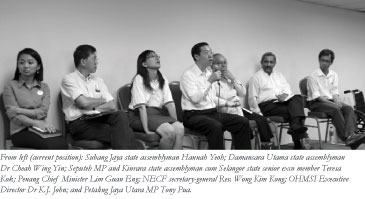 ABOVE: DAP’s meeting with the evangelical church leaders on the eve of GE12 – note the line-up of Hannah (back then young and still slender), Teresa, Guan Eng and Tony Pua

I confess that I do not know the religious status of Selangor DAP deputy chairman Gobind Singh Deo but there has been some unverified rumours about it going around. Nonetheless, I’m confident that our efficient Special Branch is aware as to whether Gobind is a Sikh or a Christian.

(Note: Some DAP Punjabis are Christian, such as Mary Josephine Prittam Singh, who is the party’s Adun for Rahang in Negeri Sembilan.)

Among the very first articles I uploaded to this blog was one on Guan Eng’s invocation of political Christianity which I penned on 29 July 2011. (I’d activated this blog on 28 July 2011.)

‘Chan Lilian in ‘trouble’ over her Christianity, actually‘ was posted 4-and-¼ years ago where I made a reference to Ms Chan who is Guan Eng’s special officer. She was questioned for sedition over her tweet “i think all Christians shud march for all the persecution they had done to us and our Lord”.

I’m copypasting below a few paragraphs that I had written on 29 July 2011 about Guan Eng and his religious orientation.

Guan Eng’s Wesak Day official message this year (2011) is illustrative of how his main preoccupation is with his own faith. It is a 421-word greeting in which ‘Buddha’ is not mentioned even a single time despite the auspicious day being one to commemorate the Gautama, Prince Siddhartha.

In contrast to ‘Buddhist’ which is mentioned only twice (“Wesak Day’s theme as announced by the Malaysian Buddhist Association … reminds us that love and blessings is not just for Buddhists but for all mankind”), the word ‘Christian(s)’ is mentioned eight times.

We should next review the context in which Guan Eng mentions Christian. In the second paragraph of the May 17 message, he said, “DAP calls on all Malaysians to stand up … against extremists …”.

A big clue can be found in the third paragraph of Guan Eng’s Wesak Day message that is wholly devoted to the plight of Christians. He said (making accusations against Utusan and Perkasa):

The political thrust of Guan Eng’s Wesak Day greeting is most apparent in the fifth paragraph: “Are non-Malays and non-Muslims an easy target to be blamed and kicked around …?”

It follows on from the earlier paragraph where Guan Eng had said that “DAP is willing to work with all Malaysians including non-Umno component members in BN to oppose this crusade …” Those whom he alludes to must necessarily be mostly non-Malay (i.e. fellow Chinese in MCA and Gerakan, Indians in MIC and PPP, Sabah and Sarawak natives in the BN Bornean parties, etc).

In a separate Wesak greeting, this time with Guan Eng wearing the hat of Penang chief minister and delivered on May 16, he additionally said: “Even though Christians and not Buddhists are targeted by Umno and Utusan Malaysia this time, what is there to stop Budhhists and Hindus from being the next targets in future”?

And he proceeds to quote from pastor Martin Niemoller’s famous poem on the Nazi persecution. This raising of the alarm, as the discontent unfolds some more, segues into the tweet by Lilian, i.e. “all the persecution they had done to us and our Lord”.

With Lim Guan Eng being Chan Lilian’s boss, it becomes apparent as to how her own so-called ‘lament’ has been coloured by his Christian crusading politics.

I wrote the passages cited above more than 4-and-¼ years ago.

Time has strengthened the appraisal that I made to be true. We can see clearer now because the DAP’s political bent has become more pronounced.

Sadly and unfortunately, the 95 percent Chinese who support the opposition and the DAP are unable to see why other Malaysians hate the DAP leadership.

To them, it is always the opponent – traditionally Umno, now PAS too – who is to be blamed. To them, it is never the DAP’s fault despite the relentless provocation and incitement by the Dapster family. 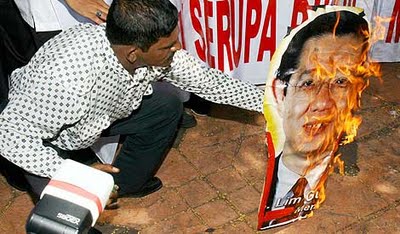