Wong Tack made headlines yesterday by saying he’s willing to burn down the Lynas plant.

RockyBru blurbs blogger Sea Demon who brings up the similarity in name between Wong Tack and Loi Tack.

“Back in the early 20th Century, we had a menace by the name of Loi Tack (also spelt as Loi Teck). Come the 21st Century, we have Wong Tack. The times may differ but both were and are advocates of criminal force.”

Loi Tack was the sec-gen of the Communist Party of Malaya from 1939 to 1947. He was also said to be an agent sent by the British security services to infiltrate the CPM.

Rocky writes that “Wong Tack may be doing his political masters’ bidding but surely there are limits there”.

We can take Rocky’s reference to “political master” – at a surface reading – to imply Pakatan since Wong Tack has been photographed numerous times with the Pakatan top leaders as well as the Pakatan and pro-Pakatan activists.

A comparison between the Himpunan Hijau chairman and the Perkasa president is inevitable due to both their calls to burn the objects of their protest.

Few care to dispute that Wong Tack’s widely reported threat – “I will personally burn down the rare earth plant!” – is provocative. Therefore, we may say that he is a provocateur.

When it comes to ‘agent provocateurs’ however, both sides are always pointing their finger at the other. Each time there is a violent skirmish at a rally, for example, the demostraters will claim that the troublemakers were planted by Special Branch or undercover plainclothes police.

The same mutual finger-pointing occurs with other provocative past episodes. For instance, the Asal Bukan Umno (ABU) followers do not believe that the pig heads were tossed into mosque compounds by either Christians, Chinese or opposition activists. They will generally allege that Umno is the culprit and that the Malay party did it to provoke public anger and gain Muslim votes.

On the other side of the fence, the pro-establishment blogosphere does not believe that it was Perkasa which recently distributed leaflets urging the burning of Bibles. Some Malay bloggers suggest that the invitations to Jom Bakaq the Allah-Bibles were really printed and distributed by the opposition in the knowledge that Perkasa will receive the blame.

The logic behind this is that sympathy votes will go to the DAP which is playing the Christian card.

Such is the level of mutual distrust in our country today. Each side will automatically accuse the other of causing trouble or of planting troublemakers to do mischief, which will in turn be laid at the opponent’s door.

The breakdown of good faith (bersangka baik) is accelerated by the widespread fitnah that the political operatives and demented supporters of the major political parties actively engage in. You would think that people can’t be dumb enough to believe all the outrageous lies that are being spread everywhere. You would be wrong.

Malaysians can be truly gullible. People blinded by hate lose the capacity to think straight.

Now let’s check out Wong Tack and his movement from the pictorial below taken mostly from the Himpunan Hijau Facebook album.

It’s only a cursory look. Readers are welcome to contribute your input.

(1) At face value, Wong Tack is in cahoots with PAS deputy president Mat Sabu who is known for his excellent ability to mobilize the party foot soldiers to turn out on the streets.

(2) The Himpunan Hijau advisor is well-known activist Wong Chin Huat who is a Fellow with the Penang Institute. That’s right, Lim Guan Eng’s think-tank — the one reported to the MACC on the complaint of offering an alleged bribe to Tunku Aziz.

To introduce Chin Huat, he’s the Bersih steering committee member always photographed beside Ambiga at their press conferences. The photo below is of the Bersih 3.0 rally. Chin Huat is in the yellow Bersih T-shirt speaking into the megaphone. 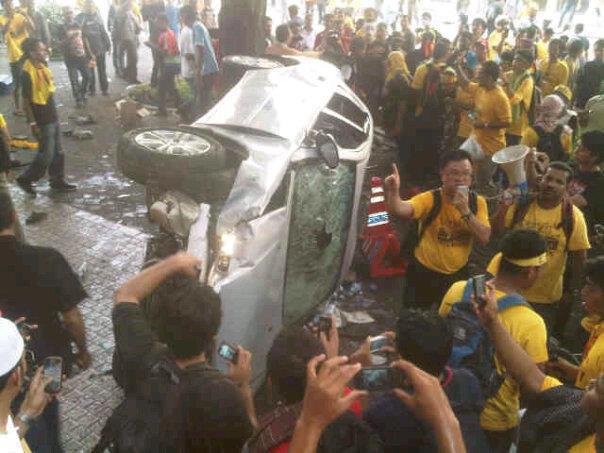 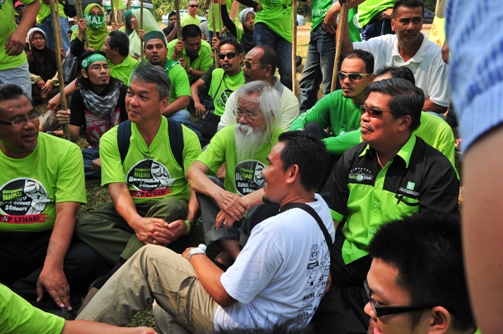 Below: Wong Tack associated with the Chinese Assembly Hall (KLSCAH)

Standing at the rostrum: Wong Tack is speaking at a photo exhibition of the Himpunan Hijau Long March, a foot trek from Kuantan to KL, Dataran Merdeka. The exhibition was hosted by KLSCAH.

Wong Tack has been photographed with the KLSCAH office bearers and this connection given generous coverage in the Chinese media.

The photo below is taken in the KLSCAH auditorium.

Aside from the merchandize of Himpunan Hijau T-shirts and bags, they’re also selling the ‘green’ movement’s calendar.

They’ve even got the Himpunan Hijau car(s).

For a young movement only launched not too long ago, they have managed to garner an outsized amount of publicity.

Some segments of the Chinese population also regard the high profile Himpunan Hijau leaders as heroes and their ‘green’ cause as heroic.

Their visuals dominating the public domain and the contents of the Himpunan Hijau social media paint the picture that they are a predominantly Chinese group.

Like DAP, it is Chinese with a sprinkling of Malays and Indians.

A prominent Kuantan doctor who has been the victim of Dapster mobbing for his opposition to the anti-Lynas groups explained, ‘Reason Lynas protesters are mostly Chinese‘. 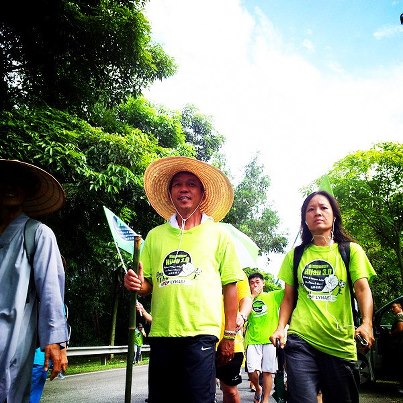 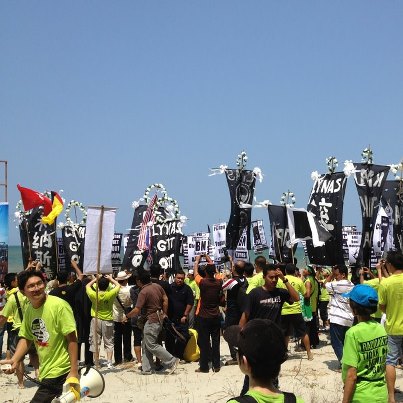 Below: Associated with pop symbols of anarchy

By now, the Guy Fawkes mask – popularized by the V for Vendetta movie – has acquired international recognition for being worn not only by the Occupy campaigners but also by dissenters of any kind.

Himpunan Hijau used the Vendetta mask in their posters.

Himpunan Hijau was also one of the endorsees of the ‘People’s Uprising Rally’.

Wong Tack’s body language as portrayed in their posters is one of combativeness.

Below: Anti-BN message of ‘regime change’

Aside from several explicit calls to topple BN and change the regime, the Himpunan Hijau banners carried by their supporters during several events over the last year are also in the same vein.

The photo below is a still taken from a video recording of the Himpunan Hijau protest outside the HSBC for the bank’s alleged dealings with the Lynas company.

An alert highlighting a New York Times article about the Himpunan Hijau activities (yes, the NYT coverage is genuine) allows us to read the wording on the banner more clearly. It says: “BN Remove Lynas Or We Remove You!”

Look at the barbed wire ringing the poster. Consider the words “medan tempur”.

The banners with the hanzi lettering (Chinese script/characters) are reminiscent of May 13 archival photos.

The background figures are replicated. We’ve seen this done before in the Bernama photoshop fiasco. The national news agency has admitted that the photographs they released were doctored (at least on two occasions).

The photoshopped poster promoting the KL112 Uprising is carried in Haris ‘Encik ABU’ Ibrahim’s blog, among other websites (screenshot bottom of this page).

It is possible that Himpunan Hijau’s publicity blitz has been actually crafted to convey the impression embedded in the photos you see on this page.

It reinforces the idea of the movement’s Chinese-ness.

That is if you consider the possibility that there is more to Himpunan Hijau than meets the eye.

Of it could well be that what you see is what you get, that is, this movement is seemingly a DAP-nurtured creature.

The bad publicity from Wong Tack’s threat to “Burn” Lynas will be a body blow against DAP and not any of the other political parties.

Malays may be led to believe that the Chinese supporters of Himpunan Hijau are contemplating the kind of violent action threatened by Wong Tack.

Will the Dapsters be able to counter this negative perception?

It is a case of senjata makan tuan. For so long the Dapsters have bermaharajalela (sorry, the English word eludes me). Update: Bermaharajalela = something like ‘run riot’ but still not exactly accurate translation

They have been the unchallenged King of the Cyber Hill carrying out vicious smear campaigns that serve to erode the level of public trust. And that has steadily destroyed good faith.

Take my explanation above for example. It actually helps to clear the DAP name.

However, all this while – since Kg Buah Pala and Kalimah Allah Round #1 – the Dapsters have tried their darndest to drag my reputation into the mud.

If they have succeeded in destroying my credibility, then all that I’ve said in this posting will find no takers. The reading public will not believe me because the Dapsters have been screaming and shouting endlessly that I’m not a credible writer.

So my little effort now at helping to clear the DAP name will go to waste.

Heck, I do not even have a platform – except for this blog which I’ve built up from scratch – in which to air my writings. Undeniably, the readership of a blog is quite limited.

The determined harassment (carried out by berserk Dapsters) that often greets what I what write makes it impossible for me to publish my articles in portals that are open to online comments. All kinds of filthy outright lies and obscenities are thrown at me. Even in articles which have nothing at all to do with me, sometimes the obsessed supporters will bring up my name.

This case of firestarter wannabe Wong Tack will do a lot of damage to the DAP.

Public perception that the DAP-linked Himpunan Hijau are a latter-day Bintang Tiga – the delicious irony of the Wong Tack-Loi Tack “communist” behaviour connection that has been highlighted – is karma’s way of biting back.

DAP and their supporters are reaping the fruit of the politics of hate, and their standard operating procedure of demonizing the enemy (including smearing their critics’ good name) that the party apparatchiks have been conducting without remorse.

Should I feel sorry for the Dapsters?

What goes around comes around. The Wong Tack fireworks is an early Chinese New Year angpow for the DAP.