Writer Amy Chua, a law professor at Yale University, says in her book World on Fire that her Chinese relatives in the Philippines “live literally walled off from the Filipino masses, in a posh all-Chinese residential enclave, on streets named Harvard, Yale, Stanford, and Princeton. The entry points are guarded by armed, private security forces”.

“… over time I have also had glimpses of how the Chinese must look to the vast majority of Filipinos”, writes Prof. Chua, “as exploiters, as foreign intruders, their wealth inexplicable, their superiority intolerable” (page 4, ‘World on Fire’).

GROTESQUE is how some greedy Bak Kut Teh eaters look

The Philippines’ richest – almost all Chinese

In her book intro chapter on Ethnic Hatred, Chua writes that in the Philippines, “millions of Filipinos work for Chinese; almost no Chinese work for Filipinos. The Chinese dominate industry and commerce at every level of society”.

Below are the Top 10 richest men in the Philippines this year according to Forbes:

Not meek and mild, lah

Filipinos with pure Chinese ancestry make up very much less than two percent of the country’s population.

Those with mixed Chinese ancestry are estimated to number roughly about one-fifth. They include President of the Philippines, Benigno Aquino, who belongs to the very rich Cojuangco clan that can trace their patriarch’s ancestral village to the Fujian province in China.

Evangelistas vehemently insist that Christians are “only nine percent” of the Malaysian population and are always telling everybody that because of their smallish number, they are weak and helpless.

Being a minority community need not necessarily correlate with weakness, as the Philippines example has shown.

The late Indonesian president Suharto (left) chatting above with the late tycoon Liem Sioe Liong, founder of the Salim group.

And Chinese are only around three percent of the Indonesian population.

BELOW: Michael Hartono and his brother Robert are Indonesia’s richest billionaires

And here are the Indonesian top 10 billionaires of 2014:

Among Indonesia’s Top 10 billionaires who are Chinese, below 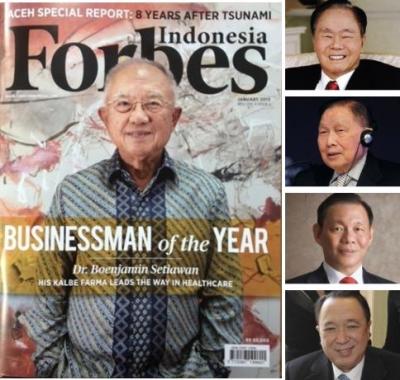 Stop bullshitting that minorities are weak and helpless

It is the same situation in Malaysia and Thailand of Chinese dominating the billionaire and millionaire stratosphere. The last prime minister of Thailand, Yingluck Shinawatra, was Chinese.

Being a small percentage – like 9.2% – of the population does not necessarily mean that a community is weak and helpless. Christian MPs dominate the Malaysian Parliament disproportionately to their population ratio.

Furthermore, even though the majority of the Christians in Malaysia are the pribumi of Sabah and Sarawak, yet it is the Chinese who dominate the Church leadership.

“there festers among the indigenous majorities deep anti-Chinese resentment, rooted not just in poverty but feelings of envy, insecurity and exploitation. Such resentment is ready at any moment to be catalyzed …”. (p.47, ‘World on Fire’)

BELOW: Richard Ng ordained as Bishop of Miri 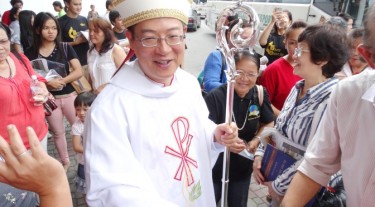 Leadership of the evangelical Christians in the peninsula is emphatically in the hands of the Chinese, most obviously.

“Meek and mild” is the last thing that the evangelistas are. They’re bloody aggressive. Between the Christians and Muslims, it’s an even balance as to who is bullying whom.